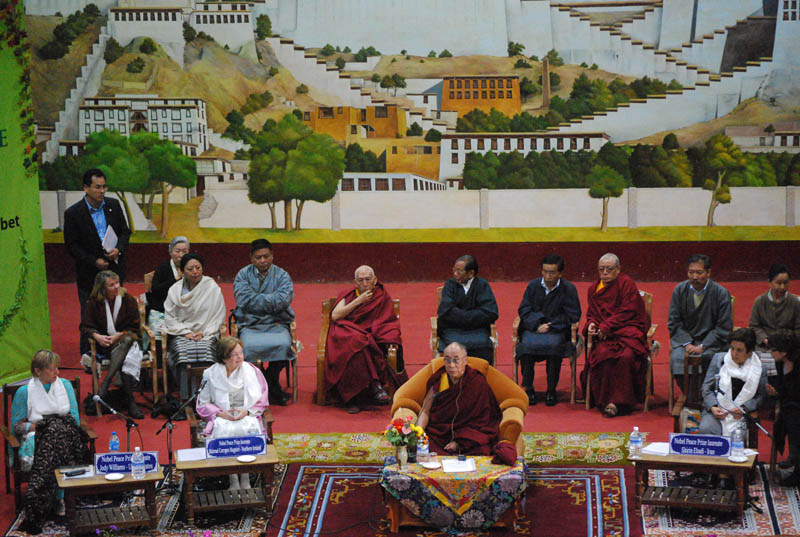 Dharamshala: - Four Nobel Peace laureates have refused to attend the World Summit of Nobel Peace Laureates in South Africa next month in support of the spiritual leader of Tibet His Holiness the Dalai Lama.

According to media reports, three of them - Jody Williams of the US, Shirin Ebadi of Iran and Leymah Gbowee of Liberia - are now traveling to this northern Indian hill town to grace His Holiness the Dalai Lama's Nobel silver jubilee anniversary celebration, a special event which will be held on 2 October, 2014.

The trio, and a representative of the International Campaign to Ban Landmines (ICBL), are pulling the plug on their scheduled trip to South Africa to attend the World Summit of Nobel Peace Laureates, being held Oct 13-15, said a Nobel Women's Initiative statement.

"The Dalai Lama advocates a non-violent, negotiated solution to the Tibet problem -- what he calls 'the middle-way approach' -- and is calling for real autonomy for Tibet under Chinese sovereignty," it said.

It said the decision to cancel the scheduled trip "follows South Africa's refusal to issue a visa to His Holiness the Dalai Lama for the Nobel peace laureates in Cape Town, and China's public declaration of thanks for South Africa's decision to block the spiritual leader from entering South Africa".

A statement from the Tibetan administration based in Dharamshala said the event is occasioned on the birth anniversary of Mahatma Gandhi, himself a proponent of peace and non-violence.

"The gathering of Nobel Laureates from different parts of the world in Dharamshala on this occasion symbolizes their support and appreciation for His Holiness the Dalai Lama's tireless efforts towards his three main commitments: the promotion of human values, inter-religious harmony and the preservation of Tibetan culture," the statement said.

The felicitation program is historically significant as 2014 is also being celebrated as the 'Year of His Holiness the Great 14th Dalai Lama' by the Tibetan people and His Holiness' well-wishers all over the world.

In the letter to Zuma, the laureates said they were "deeply concerned about the damage that will be done to South Africa's international image by a refusal or failure to grant him a visa yet again".

Earlier this month, South Africa requested His Holiness the Dalai Lama to defer his visit for this year only.

"We had a meeting with officials of the South African High Commission and foreign ministry here (in Delhi) and they requested his holiness to defer his visit to their country for this year only," Tempa Tsering, His Holiness the Dalai Lama's representative in New Delhi, told IANS.

The Tibetan National Congress (TNC) said it had launched a global campaign urging the Nobel Laureates to either boycott or relocate the summit to a venue more compatible with the Nobel Peace Prize's ideals of open and inclusive dialogue, unless the South African government reverses its decision to bar the Dalai Lama.

In a statement dated 23 September, TNC said: "The South African government, acting under pressure from the People's Republic of China, has refused to issue a visa to the Dalai Lama to allow him to attend. Fourteen Nobel Peace laureates have issued a letter to South African president Jacob Zuma stating their deep concern over this action."

"We call for the World Summit of Nobel Peace Laureates to be relocated to a more appropriate venue because the world needs this summit and no authoritarian government should be allowed to control it by censoring which voices gets heard," TNC president Jigme Ugen said.

The Mayor of Cape Town, Patricia de Lille, wrote that the visa was denied "due to sensitivities related to the Chinese government," and called her government "Disingenuous on the Dalai Lama visa issue".

In October 2011 too, the globetrotting monk had called off his South Africa visit. At that time he was invited by fellow Nobel Peace laureate Archbishop Desmond Tutu on his 80th birthday.

The South African anti-apartheid icon later traveled to this town in 2012 to meet his long-time Tibetan spiritual leader friend.