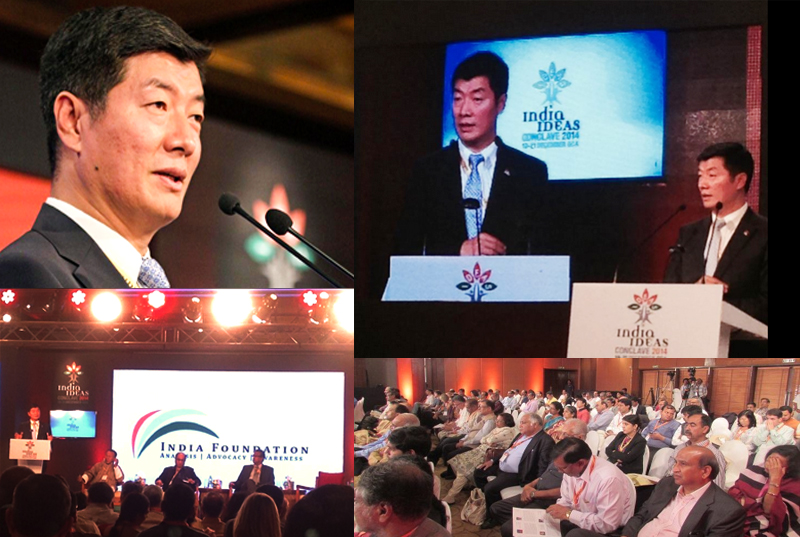 Dharamshala: - 'The occupation of Tibet brought China and India, face to face for the first time in history- since then tensions remained with border incursions occurring every year,' the elected Tibetan political leader said during a three-day India Ideas Conclave 2014 in Goa from 19-21 December.

Dr Lobsang Sangay had the most engaging speech to deliver as he made the case for why resolving Tibet was crucial for peace in South Asia.

Sikyong also made the case based on spiritual, historical, geopolitical and environmental factors. "Buddhism was introduced to Tibet by the highly acclaimed Indian masters of the Nalanda tradition. A culture of peace prevailed coinciding with the pacification of the military empire of Tibet," Sikyong said.

"Historically Tibet maintained a neutral status, and at times followed an isolationist and hermetic policy," he said, adding: "Tibet however was caught in the geopolitics of the Great Game and was occupied by China in 1950."

"The occupation brought China and India, the two largest populated countries of the world, face to face for the first time in history. In 1962 India-China war broke out. Since then tensions remained between the two countries with border incursions occurring every year," he added.

"Environmentally, Tibet also known as the third pole is the main source of ten major rivers of Asia and the plateau affects the climate and monsoon patterns in South and South-east Asia," he stressed while speaking on the critical environmental situation in Tibet.

The conclave, organised by the state government of Goa and India Foundation, was attended by over 250 eminent participants from around the world with parliamentarians, diplomats, journalists, educationists, security experts, former heads of government of Jordan, Netherlands, Slovenia, and Lithuania.