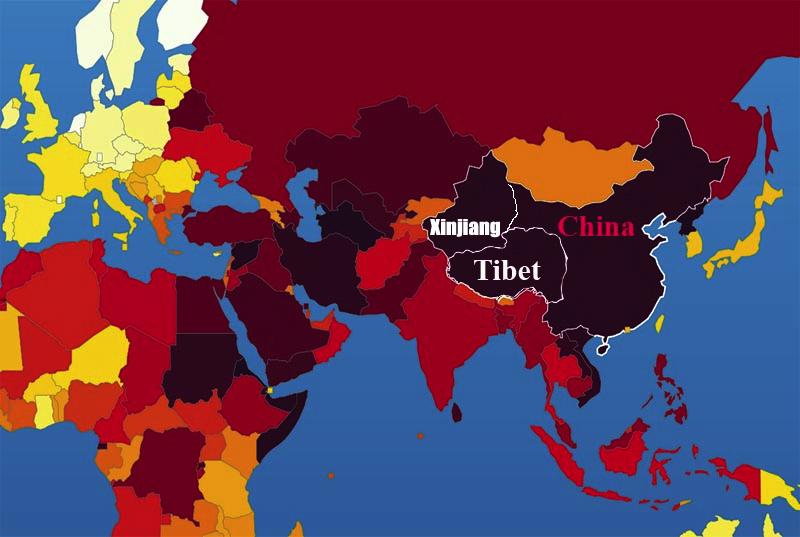 Dharamshala: - "China remains an authoritarian state, one that systematically curbs fundamental rights, including freedom of expression, association, assembly, and religion, when their exercise is perceived to threaten one-party rule," Human Rights Watch (HRW)said in its World Report 2015.

Under president Xi Jinping, China has unleashed the harshest campaign of politically motivated investigations, detentions, and sentencing in the past decade, marking a sharp turn toward intolerance of criticism, HRW stated.

In the 656-page World Report 2015, its 25th edition, the rights group said it has reviewed human rights practices in more than 90 countries.

"Under President Xi, China is rapidly retreating from rights reforms and the Party's promise to 'govern the country according to law,"' Sophie Richardson, China director at Human Rights Watch said, adding "Repression of critics is the worst in a decade, and there appears to be no end in sight."

In China, the authorities have unleashed an extraordinary assault on basic human rights and their defenders with a ferocity unseen in recent years. The government targets activists and their family members for harassment, arbitrary detention, legally baseless imprisonment, torture, and denial of access to adequate medical treatment, report said.

The Chinese government's hardline approach was particularly discernible in Xinjiang and Tibet, areas that are nominally autonomous. Indiscriminate anti-separatism campaigns fueled rising tensions, resulting in several clashes on the Tibetan plateau – including at least one in which security forces used live fire against unarmed demonstrators – and a marked increase in violence in Xinjiang, the report said.

"A series of self-immolations by Tibetans protesting Chinese government repression appeared to have abated by early 2014," the report said, adding that "the authorities punished families and communities for allegedly inciting or being involved in these protests; punishment of individuals included imprisonment, hefty fines, and restrictions of movement."

The report further said that Authorities were intolerant of peaceful protests by Tibetans, harshly responding with beatings and arrests to protests against mines on land considered sacred and against detention of local Tibetan leaders."

"China's mass rehousing and relocation policy has radically changed Tibetans' way of life and livelihoods, in some cases impoverishing them or making them dependent on state subsidies. Since 2006, over 2 million Tibetans, both farmers and herders, have been involuntarily "rehoused"—through government-ordered renovation or construction of new houses—in the TAR; hundreds of thousands of nomadic herders in the eastern part of the Tibetan plateau have been relocated or settled in "New Socialist Villages," the report found.

"The most significant legal trend in 2014 has been the government's effort to further strengthen an already powerful, unaccountable state security apparatus. It adopted an overly broad counter-espionage law and the publication of a draft counter-terrorism law that equates peaceful dissent with terrorism, strengthens control over civil society groups that receive foreign funding, and appears to target specific ethnic minority groups," the report said.

The report says that "the United Nations Secretary-General Ban Ki-moon similarly failed to criticize the Chinese government's deteriorating rights records during his August visit, instead praising the government for "its contributions to the promotion of ... human rights."

The report added: "China's 2013 leadership change has not yielded fundamental changes in its foreign policy, though it has more aggressively advanced its territorial claims in parts of Asia."

"While China engages with various UN mechanisms, it has not significantly improved its compliance with international human rights standards nor pushed for improved human rights protections in other countries, such as North Korea," it added, saying "there are eight outstanding requests by UN special rapporteurs to visit China, and UN agencies operating inside China remain tightly restricted, their activities closely monitored by authorities."

In his introductory essay, HRW's Executive Director Kenneth Roth has urged governments to recognize that human rights offer an effective moral guide in turbulent times, and that violating rights can spark or aggravate serious security challenges. The short-term gains of undermining core values of freedom and non-discrimination are rarely worth the long-term price.

"China under Xi Jinping is escalating hostility to human rights and democratic pressures, at home and abroad, yet the international community remains largely silent," Richardson said. "Abetting the systematic suppression of basic freedoms is a short-sighted and dangerous policy, one that only encourages Beijing's growing intransigence."

The report said that "the Chinese government targeted the Internet and the press with further restrictions in 2014. All media are already subject to pervasive control and censorship. The government maintains a nationwide Internet firewall exclude politically unacceptable information."

"Authorities also tightened press restrictions. The State Administration of Press Publication, Radio, Film, and Television issued a directive in July requiring that Chinese journalists sign an agreement stating that they will not release unpublished information without prior approval from their employers and requiring that they pass political ideology exams before they can be issued official press cards," the report added.

"Even as China has taken major steps backwards on human rights under Xi Jinping," it said, adding" "most foreign governments have muted their criticisms of its record, opting to prioritize economic and security issues or trying to win Chinese co-operation on issues like climate change."

"Few bilateral human rights dialogues were held in 2014, and few governments that had pointed to such dialogues as centerpieces of their human rights strategy developed effective, alternative long-term strategies, such as elevating their engagement with Chinese civil society," the report noted.

"Foreign governments also largely failed to mark the 25th anniversary of the Tiananmen massacre, or to speak up for Hong Kong when China ruled out true universal suffrage for the territory, though several noted the harsh sentences handed down to high-profile human rights defenders and the release of Gao Zhisheng, who, however, remains under heavy surveillance. For the third time in recent years, South African authorities indicated they would not grant a visa to the Dalai Lama," it further added.

The Rights group stressed that "China also continued to pressure governments to forcibly return Chinese asylum seekers and to deny visas to individuals it dislikes, such as the Dalai Lama."