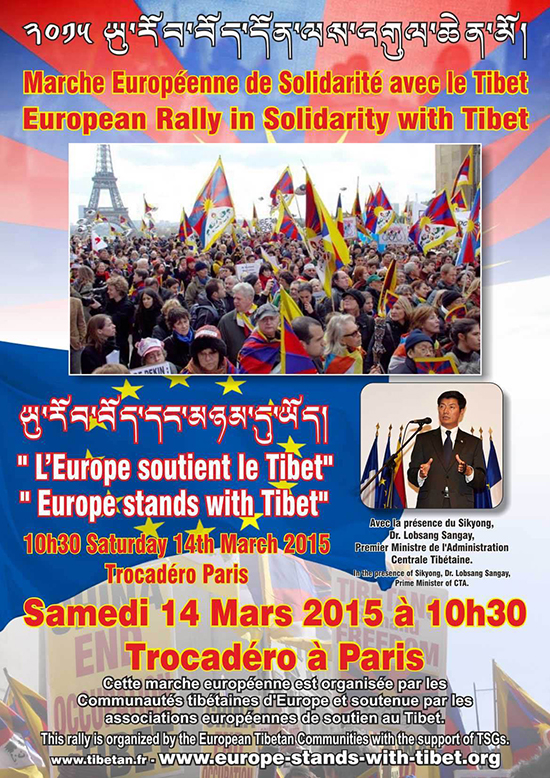 Paris, France: — Thousands of Tibetans and their supporters from across Europe will gather in Paris for a major rally "Europe Stands with Tibet" on 14 March, 2015 to demonstrate their solidarity with the Tibetan freedom struggle and His Holiness the Dalai Lama in his 80th birthday year.

"We are coming together in the heart of a city where liberty, equality and fraternity are passionately-held values, at a critical time for Tibet," said Thupten Gyatso, President of the Tibetan Community in France. "We know that the European people care very deeply for the Tibetan cause, and aim to convey that message to Governments of EU Member States and to EU leaders. We also wish to send a message of hope to the Tibetan people – we acknowledge their bold and peaceful struggle for freedom, and we stand with you."

"The International Campaign for Tibet is gravely concerned about the restrictions on Tibetans' civil liberties," added Vincent Metten, the EU Policy Director of the International Campaign for Tibet. "A number of European cartoonists have therefore contributed caricatures underscoring Tibetans' right to unadulterated freedom of speech, expression, association, conscience and religion etc. Those freedoms need to be defended by European countries as well as upheld by China."

"Europe Stands with Tibet" will bring together Europeans and Tibetans in Paris to assert their solidarity and to call upon the EU leaders to raise the issue of Tibet's future with the Chinese authorities as a matter of urgency. We call upon the Chinese government to urgently resume the Sino-Tibetan dialogue at highest level without any preconditions.

The Tibetan political leader, Sikyong Dr Lobsang Sangay, will address the rally alongside with several prominent national and European politicians and human rights activists, such as Robert Badinter, French Senator and former Minister for Justice; Karim Lahidji, President of the International Federation for Human Rights; Harry Wu, Director of the Laogai Research Foundation; and Matteo Mecacci, President of the International Campaign for Tibet.

The rally marks the anniversary of the national uprising against China in Tibet in March, 1959, and an unprecedented wave of protests that swept across Tibet from March 10, 2008. Due to an environment of unbearable oppression, 136 Tibetans have self-immolated in Tibet since 2009.

"Europe Stands with Tibet" is organised by the Tibetan communities in Europe and the International Campaign for Tibet in cooperation with the International Network and with the support of its members as well as groups from non-EU countries.