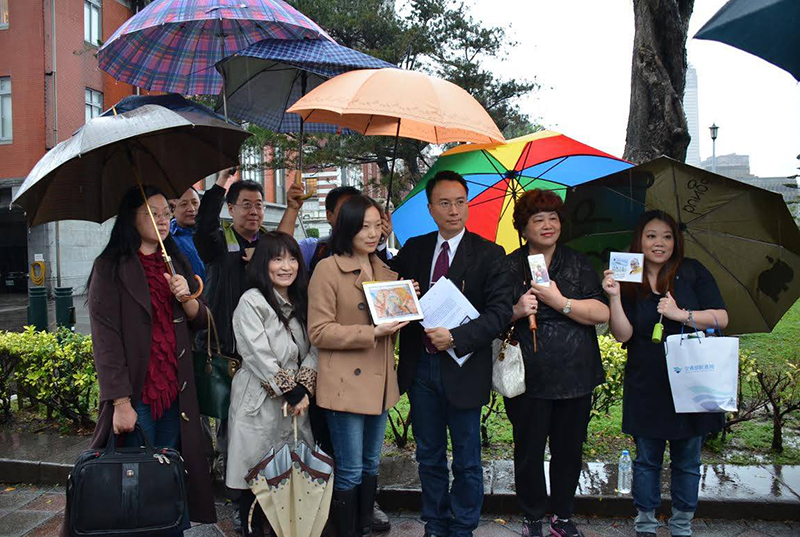 Dharamshala - A petition asking for a Taiwanese visa to be granted to His Holiness the Dalai Lama was submitted earlier today to President Ma at the Presidential Office Building, Taipei by ten members from the International Association of Tibetan Buddhist Dharma (IATBD).

The petition asks for a visa to be granted to His Holiness the Dalai Lama to allow him to visit Taiwan in July to celebrate his 80th birthday and to offer his blessings to the country.

According to Hou Yi-Ling – a representative of the delegation – the petition was signed by over 50 organisations in Taiwan, who are eager to welcome His Holiness back to Taiwan following his visits in 1997, 2001 and 2009, where he prayed for the victims of Typhoon Morakot.

The submission of the petition was preceded by the visit of 12 IATBD members to Dharamshala on March 16, where they presented His Holiness with an invitation to visit Taiwan from 15 Taiwanese civic organisations.

He responded immediately, saying: "If Taiwan does not have any difficulty, I am fully prepared to visit." He also reminded his followers to be pragmatic, stating that he respected the decision made by Taiwanese authorities.

Since devolving his appointed authority as political leader of Tibet to the democratically elected Sikyong Dr Lobsang Sangay in 2011, His Holiness has openly said that he will continuously promote his three main commitments around the world through travel. These commitments are: the support of human values such as compassion, tolerance and contentment, the championing of religious harmony among the world's major religious traditions and the preservation of Tibet's Buddhist culture, one of peace and non-violence.