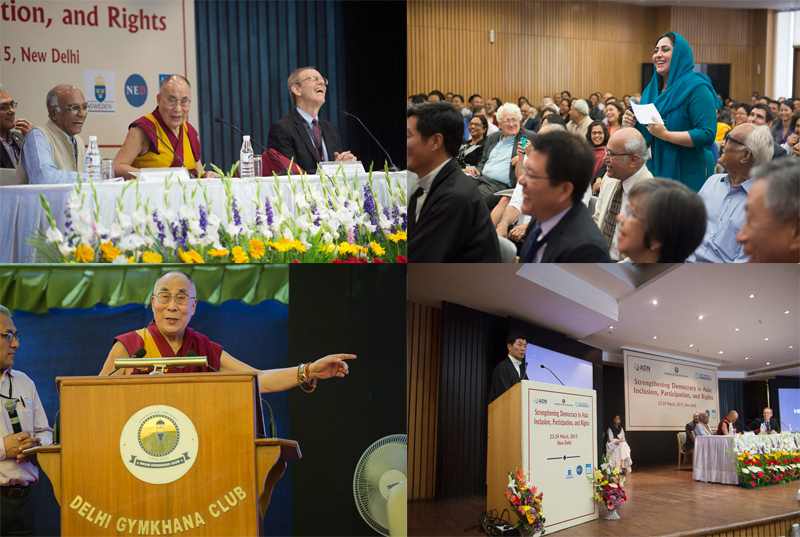 New Delhi  — The spiritual leader of Tibet His Holiness the Dalai Lama said that 'truthfulness and transparency will lead to trust and trust yields friendship and the use of force is entirely the wrong method to employ.'

His Holiness addressed conference on the theme — ‘Strengthening Democracy in Asia’ to mark the legacy of veteran Indian activist and politician, George Fernandes at the India International Centre in New Delhi.

Carl Gershman, President of the National Endowment for Democracy welcomed His Holiness and Sikyong Dr Lobsang Sangay before outlining the aspect of George Fernandes’ life.

Anselmo Lee from Korea mentioned that this was the first time the Asian Democracy Network had participated in a meeting in India. He pointed out that this year, 2015, is the 800th anniversary of the Magna Carta, one of the first documents to describe human rights. It is the 70th anniversary of the end of the Second World War and therefore of the establishment of the UN.

“On this special occasion, we remember my old friend George Fernandes, who even when he became Defence Minister continued to maintain his simple, self-sufficient way of life. Some of our friends’ attitudes changed once they came to exercise power; not George Fernandes," said His Holiness.

"Fernandes was sympathetic to Tibet and the Tibetan cause right from the start and never missed an opportunity to speak up for them. His face will remain in my heart until I die and I’ll remember him even into my next life,” he added.

With regard to the importance of democracy, His Holiness said that "even animals love freedom." He mentioned the small dog and cat that live with him, who, whenever the door is open, love to run free.

It’s in this spirit that, His Holiness said, "it’s really important that we use our human creativity and intelligence. Looking over the audience His Holiness observed that there were hardly any delegates from Africa or from the Arab lands." His Holiness suggested they be invited in future, noting the great potential waiting to be fulfilled in Africa.

“There are real problems in many of the Arab lands at present, but it’s important to recall that even the terrorists and militants, who are causing such alarm, are human beings," he said.  Adding "We need to befriend them and win their trust. The use of force is entirely the wrong method to employ."

“Today, we place too much stress on secondary differences between us like our religious faith or nationality. Here in India the caste system is an obstacle to freedom and democracy. 2600 years ago Buddha Shakyamuni was opposed to caste discrimination. In the context of democracy not only freedom, but also equality are essential.

“The Bolshevik revolution opposed and removed the Tsar, but then Lenin became a tyrant like the Tsar before him. Likewise, the Chinese communists successfully opposed the Emperor and powerful warlords, only to become like warlords themselves. Today, the movement for democracy should include people from all over the world standing opposed to the narrow-minded short-sightedness of totalitarianism.”

Answering questions from the audience, His Holiness stated that India is the world’s most populated democracy and, because it also has the rule of law, it is the most stable country in its neighborhood. By comparison, Deng Xiaoping saw that China remaining isolated from the rest of the world was not in its interests. He opened up the economy, which has led to millions being lifted out of poverty, but now there are those who say that unless the political system changes too, the economic benefits may be lost.

His Holiness said that eventually the Chinese people will resist totalitarianism just as Liu Xiaobo has resisted it. Change will also come because of the thousands of Chinese students who are studying abroad. Carl Gershman thanked His Holiness for remembering Liu Xiaobo, expressing the hope that he will be free to attend a meeting like this in the future and that he will know of the support there is for him.

Recalling the drawbacks he had noted in his childhood of too much power in too few hands, His Holiness explained how he had tried to implement reforms. It was not until Tibetans were in exile that he was able to take the steps that eventually culminated in the election of a political leadership and the opportunity for him to retire from such responsibilities.

A female delegate from Bangladesh asked about the difficulties faced by women, even in democracy. His Holiness recounted how, when the need for leadership emerged in early human societies, physical strength was the main criterion, which led to male dominance. Today, with the development of education there is more equality and it is essential that more women give a lead. Another woman from Pakistan asked about developing greater trust between India and Pakistan and His Holiness encouraged greater people to people exchanges, which are a practical way to overcome the propaganda of vested interests.

Carl Gershman introduced Sikyong Dr Lobsang Sangay who was effusive in his appreciation of the democratic changes His Holiness has introduced. He noted that although His Holiness had called him ‘my political boss’, while he would serve for a limited term, His Holiness was spiritual leader for life. He was also full of praise for the consistent support and solidarity George Fernandes showed with Tibetans for decades.

During the hot afternoon His Holiness received an enthusiastic welcome at the Gymkhana Club where he spoke about the need to foster both warm-heartedness and intelligence. He told the audience that “All our knowledge came from India. One great Tibetan master in the early 15th century remarked that although Tibet is nominally bright with snow, until the light of knowledge came from India, Tibet had remained in the dark.

“You Indians are our gurus and we are the disciples, but I think we have proved to be reliable disciples because we have well preserved the knowledge we gained from you.”

He spoke of the need to promote ethics in a secular way, beginning with the acknowledgement that we are all the same as human beings.

“If we are honest, truthful and transparent it will lead to trust and trust yields friendship. For social animals like us, friendship is very important. Taking a more ethical approach in this very life will bring self-confidence and inner peace.”

In answering questions His Holiness mentioned the Buddha giving his followers the liberty to question his teachings and examine them with reason. He pointed out that the Buddha had given different explanations on different occasions according to the dispositions of those listening to him.

“The hand is empty, fire is empty and burning is empty, but if you put your hand in the fire there will be pain.”

Questioned about karma His Holiness said that the word karma means action. While some people lazily blame what happens to them on ‘their karma’, they don’t stop to ask who created this karma by doing the action. The answer is that they did. In response to doubt about the presence of ancient values in contemporary society, he said it is true that there is a need to make an effort to preserve positive traditional values in the community.

At the end, Club Secretary, Mr Vidya Chibber offered his thanks to His Holiness for coming, praising him as a man of peace and a rare human being. The members who thronged the path to catch a closer glimpse of him as he left seemed to agree.