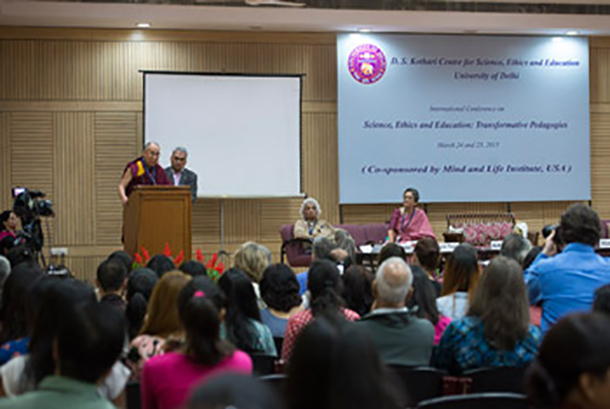 Dharamshala – His Holiness the Dalai Lama asserted his belief in science as "an important method for exploring reality" during the inaugural address at Science, Ethics and Education, a two day international conference on March 24-25 at the University of Delhi.

His Holiness was joined by scholars and teachers from around the world involved in the research of the ancient pedagogical traditions of India. Together, they considered how they might develop a more rounded education system that promotes ethical values as well as materialistic ones.

"Everybody knows that science gives us an important method for exploring reality. And coming to an understanding of reality is important if your approach to what you are doing is to be realistic. If it isn't, it's not likely to succeed," His Holiness said.

"I've been interested in science since I was a child. I was always curious to know how and why things worked. When I was given mechanical and clockwork toys I played with them for a while and then took them to bits to see how they worked. Some of the time I was able to put them back together again."

It was this passion that prompted His Holiness to defy the advice of a friend 30 years ago – that "science is the killer of religion" – to actively engage in dialogue with scientists. In due course, this led to the establishment of the Mind & Life Institute, which co-sponsored the conference.

His Holiness elaborated: "Many scientists are now interested to know more about the ancient Indian science of the mind. To begin with they assumed that the mind was the product of or entirely dependent on the brain, so if the brain stopped the mind stopped. Nowadays, however, there are clear findings that mental training can affect the brain."

His Holiness pointed out that many of the problems that we face today relate to an imbalance in the way we develop our cognition and our emotions.

"Too often emphasis is placed on developing a powerful brain despite the fact that – as human beings – we have the potential to develop warm-heartedness. Scientists have found that infants shown images of people helping each other or hindering each other clearly show a preference for the former. This suggests that it is basic human nature to be generous and helpful," he said.

His Holiness argued that the 1 billion people who currently declare themselves irreligious can benefit from the nurturing of inner values, which are often associated with theistic ideas but are in fact a genuine source of humanistic ideals.

He asserted: "We need to employ a secular approach to ethics, secular in the Indian interpretation of respecting all religious traditions and even the views of non-believers in an unbiased way. Secular ethics in scientific findings, common experience and common sense can easily be introduced into the education system. If it can be done, there is a real prospect of making the 21st century an era of peace and compassion."

Professor Gananath Obeyesekere – a Sri Lankan academic who is Professor Emeritus of Anthropology at Princeton University – also spoke at the conference, and discussed the varying presentations of Buddhism with His Holiness. Obeyesekere recalled the dry pedagogy of Buddhist teachings in abstract intellectual terms in his youth, in contrast to the powerfully vivid experiences of visiting sites of pilgrimage where teachers told stories based on vernacular texts.

His Holiness acknowledged the different ways Buddhists invoke the teachings, and said that "humanity benefits from diversity, a variety of approaches. But if we over-emphasise differences, we risk dividing "us" and "them", with the attendant risks of conflict and violence."

Other speakers included Dr Radhika Herzberger – Director of the Rishi Valley Education Centre – established by the late Indian writer and mystic Jiddu Krishnamurti. She presented a paper that echoed Krishnamurti's philosophy, asking if knowledge has any place in human transformation. Krishnamurthy suggested that at a time and in a context in which most education theories are based on rationality, learning in fact consists not so much of rational ideas but of ideas that are infused with feeling, powerfully influenced by the social environment surrounding the student.

Another academic, Dr Bataa Mishigish – a former monk in Ulaanbaatar, Mongolia and an expert on religion in the modern world – expressed challenges that have appeared in the social relations of Buddhist institutions in Mongolia, where democracy emerged in 1990 after the disintegration of communist regimes across Europe in 1989. Despite its political freedom, the public, cultural and educational relations of restored and reinvigorated Buddhist institutions are still being worked out in modern Mongolia.

His Holiness commented that "modernisation tends to be about external trappings rather than inner values, and it's the inner values that are the most important. Buddhism is part of Mongolia's national identity, and the proper way to preserve it is not by building temples and statues, but by preserving knowledge of the tradition and putting it into practice."

The final speaker of the first day of the conference was Ha Vinh Tho, a teacher who shared his experience of implementing a compassion-based curriculum in Bhutan and Vietnam. The curriculum is based on four pillars:

Tho emphasised the final two pillars in indicating the importance of children developing social and emotional skills, ones which he says "can be cultivated and trained."

He also spoke of the heartening experience he has had implementing the Call to Care programme that is being developed in collaboration with the Mind & Life Institute and is being piloted across Israel, Bhutan and Vietnam. Essential to Call to Care are three kinds of care: receiving care (based on gratitude), self-care (based on self-management), and extending care (based on expressing compassion for others).

Above all, Tho stated that Call to Care is about educating the next generation in the most rounded way possible.