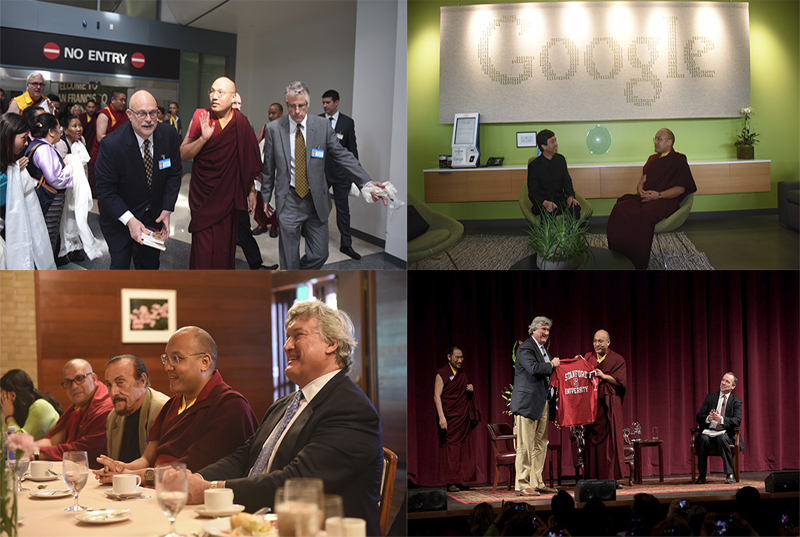 Redlands, California, U.S. (March 115-17, 2015)– The 17th Gyalwa Karmapa, Ogyen Trinley Dorje delivered a lecture on the theme of 'Caring Connections: Compassion, Technology and the Environment' after meeting with both students and faculty at Stanford campus as part of his two-day visit to the campus and his two-month tour of the United States.

The lecture was held at the university's Memorial Hall to a sold-out gathering of 1,700 students, faculty and alumni. The event was live-streamed by Stanford University, and another 3,000 people watched online. Simultaneous translation was provided.

"Although this is my third visit to the USA," the Karmapa began, "it's my first opportunity to have an extended visit to any foreign country, and I feel this is a special opportunity for me in my life. At the beginning of this tour I had an appreciation of great freedom, and I feel that this tour marks a significant step into the future for me."

He then began to explore the term 'compassion' and what it means on a personal level. The Karmapa shared some of his treasured childhood memories with the audience, showing just how deeply compassion was woven into his own Tibetan upbringing.

"I think the environment I was raised in by my parents was an environment of great compassion. Part of this was just the closeness we all shared with each other in our physical space. My whole family lived inside a tent made of yak hair, all in the same room together. You could call it the living room, you could call it the kitchen—it was just one room," he described.

"What I remember in that very close space together with my family is the sound, every morning, of my parents making prayers, expressing sentiments such as may all sentient beings be happy, may all sentient beings be free of suffering. Then again I would fall asleep to the sounds of similar aspirations in the evening. In this way I really feel that I was raised in a mandala or a circle of compassion and love."

The Karmapa then explained that compassion is tightly woven with the reality of interdependence that we all share.

"I think all of us have our own individual understanding of what the term 'compassion' means. But I think if we called compassion by another name, we could say it's all about developing a sense of responsibility in relation to the reality of interdependence," he said.

"When we look at the way things happen in real life, we can see that many problems arise in the context of issues such as the environment, gender inequality, and so on, because we don't have an appreciation of the interdependent nature of reality. Instead, perhaps unknowingly, we adopt a default attitude of selfishness, basically only cherishing our own concerns. We can see that this is the root of many of these problems."

The Karmapa drew examples from everyday life to demonstrate the powerful reality of interdependence between beings and the natural world we depend on.

"We can especially see how this phenomenon of interdependence plays out in the context of technology. We're seeing rapid advancements in technology, and as humans we're also coming to depend more on technological advancements and placing even more of our hopes in technology. But technology is something that constantly requires updates and improvements, and that constant flow of updates and improvements in turn depends on a great array of natural resources," the Karmapa pointed out.

"But we only see what we have in our hands when it comes to technology. We only see, for example, the new iPhone that we've acquired or that we want to acquire—we don't see directly with our own eyes all the natural resources and all the human hardships that went into the production of that iPhone. Our attention tends to remain just at the surface with what we can see with our own eyes, even though all the information about what went into the production of the iPhone is available to us. We're not looking at the longer or larger picture of where this is all coming from."

His Holiness used another powerful, everyday example to illustrate our interconnectedness and the common ground we all share of wanting to be happy and not wanting to suffer.

"We may wear clothes here in the US, but most of those clothes aren't made in the US," he said. "They're made in other countries, often developing countries. So developing compassion might involve giving rise to greater awareness of the conditions in the factories where our clothes are made and the hardships the people who work at those factories might endure. Compassion might involve giving rise to greater awareness about their difficult situation, in contrast to the pleasant situation we enjoy. With the purchase of clothing it seems that we get the good stuff, and they get the bad stuff. We get the good times, and they get the hard times."

Rather than merely sitting back and observing the situation, the Karmapa explained that our compassion also needs to be active and involved.

"We can also see how sometimes we separate ourselves from the suffering of the world by regarding it as a show that we're sitting back and watching," he said. "For example, we might become aware of the suffering and difficulties that are happening in the Middle East. But we're just kind of sitting back and observing as if it were a show to take in, not really involving ourselves by taking action or becoming more dedicated toward that situation.

"Compassion means becoming more involved, taking more action, developing more dedication. And that means we need to take more risks. But our habit as human beings is that very few people seem to enjoy taking risks. We tend to be more comfortable in our habitual zone of having things be easy and smooth for us.

"Although we appear to be separate from others, we're actually very close," the Karmapa said. "The modern world is bringing that reality even more into the fore – our world is becoming smaller and we're becoming even closer to everyone else we share the planet with. We're sharing others' experiences of happiness and suffering even more."

The first stage on his official tour of the United States brought the young Buddhist leader to Silicon Valley in California. He spent the day at Googleplex, touring its facilities, taking a ride in its prototype driverless car and giving a talk to Google staff.

His talk at Google was prefaced with opening comments by Google's only Tibetan employee, Sonam, who brought many members of the audience to tears with her personal reflections. After speaking movingly in Tibetan to the 17th Karmapa, she translated her comments into English for the audience. "Your presence here is like a dream for me," she said.

The Karmapa Rinpoche on his arrival at the San Francisco airport was given a warm welcome by Tibetans as well as international devotees, on Sunday, March 15.

He first expressed his sheer joy at having this opportunity to spend two months in the United States. He then spoke of his own experience listening to the plans for him to deliver lectures on so many different topics at the various universities.

"I appreciate their kind words, but all this praise puts me under a lot of pressure and puts me on the spot to say something important," he said wryly. "I am not sure how I will perform under such pressure, but hopefully it will turn out well."

He went on to express his gratitude to everyone for showing him such a warm welcome, and singled out those who had exerted such efforts on behalf of this trip. "Thank you from the bottom of my heart," he said.

"This is the first time I have had an opportunity to spend such an extensive amount of time in any foreign country," he observed. "Therefore, I would like to take this opportunity to offer my sincere thanks to the Indian Government, and to all my supporters and friends in India who helped to make this possible."