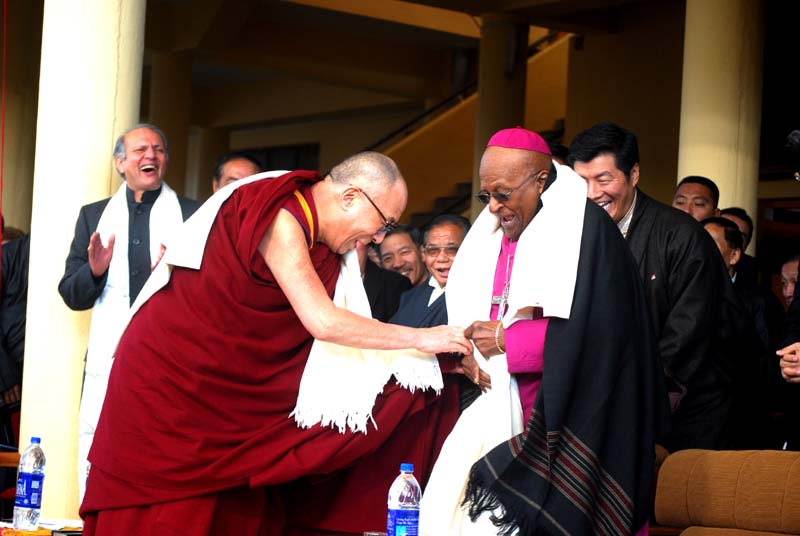 Dharamshala — Archbishop Desmond Tutu, Nobel Laureate from South Africa, arrived in Dharamshala Saturday afternoon who is on a week-long visit to collaborate a book titled 'Book of Joy. He was received at the Gaggal airport by the spiritual leader of Tibet His Holiness the Dalai Lama.

Sikyong Dr Lobsang Sangay, the political leader of the Tibetan people and Ngodup Dongchung Kalon for the Department of Security had also arrived at the airport to welcome the Archbishop.

"I am so thrilled to be with my dear friend, often things and people try to keep us apart but the love that we have for each other and the goodness of god's universe ensures that we will meet." Archbishop Tutu told reporters at the Gaggal airport on his arrival from South Africa.

"I do not know why the South African government is denying visa to His Holiness the Dalai Lama," he said.

"I invited the Dalai Lama to be part of my birthday celebrations in South Africa. However, I was surprised to know that he had been denied visa by the government. I talked to the Dalai Lama on the phone and enquired how many divisions of the army he had because of which the Chinese government was afraid of him." Answering the question Tutu said: "They are right; spiritual leader is something to be taken seriously." Desmond Tutu said.

To mark His Holiness the Dalai Lama's 80th birthday, the two Nobel peace laureates will spend time together in Dharamshala 'in deep dialogue and playful laughter as they share their experience of how to find joy in the face of life's challenges.'

It acquired the pair's collaborative "The Book of Joy" in what the bookseller described as a "very spirited" 12-way auction. Their discussion will form the basis of the text, with the pair - who call each other "spiritual brother" - also inviting members of the public to ask the questions about joy and happiness they most want answered on the authors' Facebook pages. The most popular will be addressed during the meetings this April, according to multiple media reports.

83-year-old Archbishop Tutu, who flew to Dharamshala from Amritsar after paying obeisance at Golden Temple on Friday, would stay in the hill-town till April 26. This has been Tutu's second visit to the CTA headquarters in since 2012.