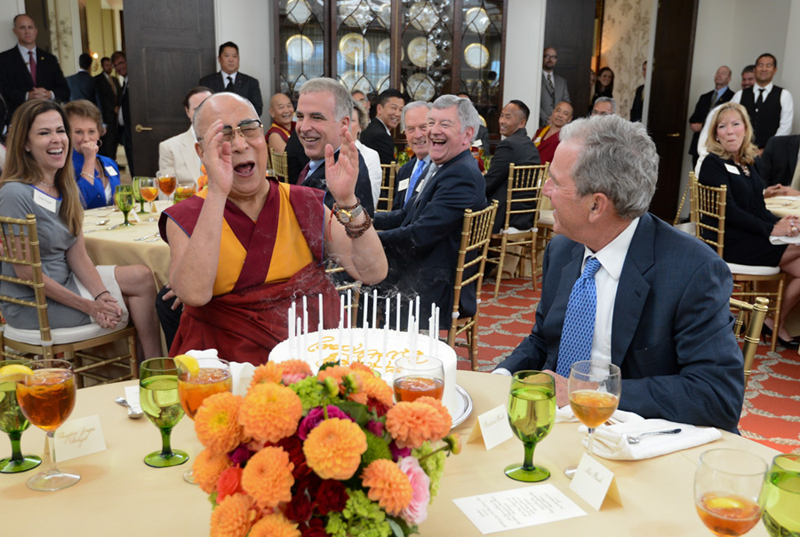 Dharamshala — Expressing his hope, that the United States will continue to lead the free world, His Holiness the Dalai Lama of Tibet praised the former US President George W. Bush for his lifelong commitment to freedom, liberty and democracy.

The Wednesday event was moderated by ABC News political correspondent Cokie Roberts and it was hosted by the George W. Bush Presidential Center and SMU in conjunction with the World Affairs Council of Dallas-Fort Worth.

At a luncheon with Bush Center friends and supporters Margaret Spelling, President of the George W Bush Presidential Center welcomed His Holiness as a leader of our time. She said: "We celebrate you and the principles of peace and compassion you represent. We are honored that you are beginning your current visit to the USA here in Dallas. Thank you for coming."

Over 5000 people attended the sold-out event. Among the crowd was former President George W. Bush and former first lady Laura.

In his remark, Bush said: "Sadly, Chinese leaders are more concerned that their country will break up, but I told them this is the best guy for you to deal with, but they don't listen."

"I am the only US President who has stood up with His Holiness in public. He is dealing with forces that seek to undermine his basic sense that everyone should be free. It's an honor to have you here."

"Thanks for the cake and thank you all for coming. You know, sometimes in politics you meet someone who tells you something and doesn't really mean it. His Holiness is someone who looks you in the eye and means just what he says. China makes things hard for him and yet he's joyful, because his heart is so sweet and full of love.

His Holiness said he admired George W. Bush's lifelong commitment to freedom, liberty and democracy. He also said that US is responsible not only for 350 million Americans, but as the leader for the wider free world.

"My dream is that the 21st century will lead to a better world, a more peaceful, more compassionate world based on a sense of the oneness of humanity," he added.

Bishop McKee offered prayers before the meal. Afterwards in her brief remarks Mrs Laura Bush reminded the gathering that it will be His Holiness's 80th birthday on July 6, a birthday he shares with her husband. A cake was brought out, everyone sang 'Happy Birthday' and the two friends blew out the candles together.

His Holiness came face-to-face with his portrait during a visit to The Bush Center in Dallas, Texas, on his 80th birthday.

Beaming, he said he was impressed and flattered - but joked that his right eye could use a little work, a staff member told Daily Mail Online on Wednesday.

In a gesture of thanks, His Holiness also presented Bush and Laura Bush with white traditional scarves which embodies purity and good fortune.

The Nobel laureate was one of the leaders Bush visited and hosted most during his tenure in the White House. The pair struck up a close relationship, and in 2012 His Holiness told Piers Morgan on CNN: 'I love President Bush.'

Morgan replied: 'Really?' His Holiness the Dalai Lama responded: 'Yes, really. As a human being. Not as a president of America. Sometimes his policy may not be very, very successful. But as a person, as a human being, very nice person. I love him.'

He added: 'After he sort of began the Iraq sort of crisis ... I expressed to him: "I love you, but your policies concerned, I have some reservations" I told him.'.

George W. Bush has been a close friend of His Holiness the Dalai Lama for years. Bush met several times with the Tibetan spiritual leader at the White House when he was the 43rd president of the United States.
In 2007, in a hugely symbolic moment, Bush met publicly with His Holiness the Dalai Lama, personally presenting him with the Congressional Gold Medal in an elaborate ceremony.

In front of TV cameras and Washington's most powerful lawmakers, the two leaders warmly greeted each other. President Bush urged the Chinese government to invite His Holiness the Dalai Lama for talks; the authorities in Beijing were enraged.