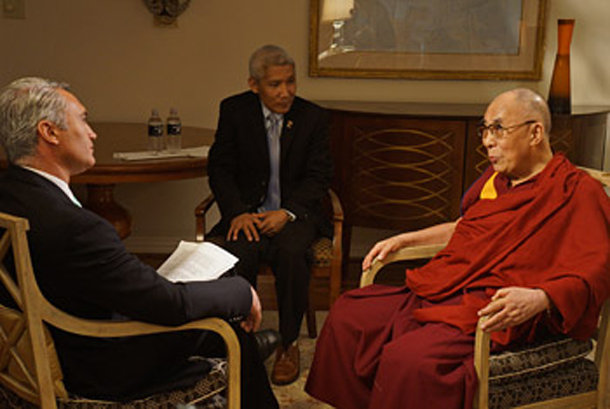 Dallas, Texas, USA — In an interview with Edgardo Del Villar, who is a news anchor for Telemundo, the largest Spanish TV channel in the USA, His Holiness the Dalai Lama of Tibet said, the ongoing censorship system in China is "wrong" and "the 1.3 billion Chinese people have a right to receive reliable information."

Del Villar recalled that in 1987 His Holiness released a "Five Point Peace Plan" and he wanted to know what had happened to that plan.

"The Zone of Peace was an idea for the longer term, what we need to do now is preserve Tibetan culture and language, which remains the best medium for explaining the Nalanda tradition of Buddhist understanding. Ecology too is important," His Holiness said, adding: "We opened a dialogue, but hardliners brought it to a halt."

"Xi Jinping seems to be a more realistic leader, but he is currently absorbed with tackling corruption, taking a courageous stand that I admire," His Holiness reiterated.

As for what might change in China, the Tibetan leader said that "the 1.3 billion Chinese people have a right to receive reliable information and that censorship is wrong. Meanwhile students abroad will learn about reality and take that knowledge home with them, therefore, he repeated, censorship should stop."

"It's also important that the Chinese judicial system be raised to international levels. Xi Jinping has spoken about this, but hardliners in the system continue to ignore reality," he added. In the meantime, Chinese Buddhists who come to see him regularly weep and plead with His Holiness not to forget them.

Regarding his retirement from political responsibilities in 2011 and the response to it from Tibetans in Tibet, His Holiness stated that by and large they trust him, so they understood why he'd done it.

He mentioned that some Tibetan religious conventions are linked to the earlier feudal system and the time has come to change them. The custom of Dalai Lamas being political as well as spiritual leaders, he said, is out of date.

Villar asked what His Holiness would have wanted to study if he hadn't undertaken a spiritual training and he replied, "Science." He added that although he had made a hobby of dismantling watches and so on in the past, these days when he has time he prefers to read religious texts and revise what he has studied before.

Asked who he admires, he answered, "Humanity", noting that if you believe in God, then God's greatest gift has been the human brain. The important thing to do, however, is to learn to use it properly.

Before closing the interview, Villar asked about what he most likes doing, he replied: "Talking", adding that his favorite topic is human values.

"When I open my mouth, I always talk about humane values, science and Buddhist philosophy."

Asked what is the most important of those humane values, he unhesitatingly replied by saying "Concern for others."