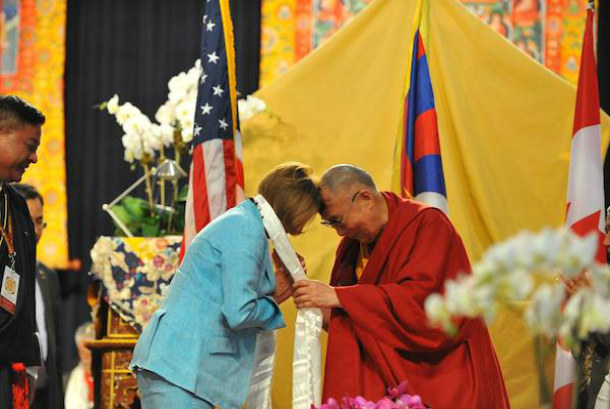 Washington DC — US House Minority Leader Nancy Pelosi (D-Calif.) praised His Holiness the Dalai Lama's compassion, kindness and infinite wisdom and said if freedom-loving people do not speak out against "oppression in Tibet," then they have lost all "moral authority."

The former Speaker of the United States House of Representatives Nancy Pelosi made the following remarks at NATA's event to honor His Holiness the Dalai Lama, the spiritual leader of Tibet.

Your Holiness, it is with profound gratitude and humility that I am deeply honored for the privilege to join you for this blessed celebration of your 80th birthday—and to do it in the company of Rigdhen Dolma, Sikyong Dr. Lobsang Sangay, Speaker Tsering, Richard Gere — oh my goodness, Richard Gere, thank you for your persistent advocacy, leadership, and long term dedication to His Holiness and the people of Tibet. And to join Valerie Jarrett, who early in President Obama's Administration, right at the start, met with His Holiness in India, as she mentioned, on behalf of the President — thank you for bringing his greetings today. It's an honor to be with the monks who are here. And I want to go from Valerie's comments to say that it was President Obama who earlier this year, at the National Prayer Breakfast in February, said this, he said that His Holiness the Dalai Lama "is a powerful example of what it means to practice compassion, who inspires us to speak up for the freedom and dignity of all human beings." President Barack Obama, earlier this year.

I have some wishes on His Holiness's birthday and I wish that you all could have seen the response that that statement made at that breakfast in appreciation—Richard, you were there, you saw the response, people watching on TV saw it, I wish you all could have. For many Presidents, His Holiness has been an enduring example of how world leaders must practice compassion and defend the dignity of the downtrodden. Again, another President, President Bush, I was blessed to be Speaker of the House when the Congress of the United States presented His Holiness with the Congressional Gold Medal in 2007 – Richard, you were there! I wish you could have seen at that ceremony President Bush called His Holiness, quote, "A universal symbol of peace and tolerance, a shepherd for the faithful, and the keeper of the flame of his people". But His Holiness — I come as a civic leader — I come also to brag about the connection His Holiness has had with our country, and with Presidents of the United States. Many Presidents have honored this keeper of the flame over the years. The first one was Franklin Roosevelt. As a young child, the Dalai Lama received a gold watch from President Franklin Roosevelt showing the phases of the moon and the days of the week. The watch is a symbol of the lasting friendship between His Holiness and the United States. His Holiness still uses the watch, and his teachings about the connection between science and religion remain an important and relevant part of his message. His Holiness says I'm always talking about the watch. Do you have it today, Your Holiness? [laughs]. Next time, 90th birthday.

The connection has always been present in his messages to Congress, where he has had a strong relationship. So I am proud to bring heartiest birthday greetings from His Holiness' many, many friends in Congress, and they are truly friends—on both sides of the aisle, and on both sides of the Capitol, in the House and in the Senate. On recent occasion I saw him there with Senator Dianne Feinstein, a friend of His Holiness and of Tibet, and John McCain, on the same program. In our House this week, I joined with Republican Chairman Chris Smith, your friend, in celebrating the occasion of His Holiness's 80th birthday when we unanimously—His Holiness brings people together, yes, as was mentioned, but he also brings Democrats and Republicans together because the vote to celebrate his 80th birthday, Valerie, was unanimous.

His Holiness' relationship with Congress goes back many years. It was mentioned that I've been in Congress 28 years that would be in June. In September, 28 years ago, it was an honor for me to join my colleagues in welcoming His Holiness as he proposed the historic Five Point Peace Plan for resolving the future status of Tibet, and he made that presentation to the United States Congress. I wish you could have been there to see that presentation 28 years ago. It did change our lives. In its five points, His Holiness was already emphasizing our responsibility to the environment. As it is stated in one of his points, serious efforts must be made to restore the natural environment in Tibet. Tibetans have a great respect for all forms of life. The inherent feeling is enhanced by the Buddhist faith, which prohibits the harming of all sentient beings, whether human or animal. That is in the five points. It's important to know that when His Holiness received the Nobel Peace Prize—when he received that, just a couple years after his visit to us—he was the first Nobel Laureate to be recognized for his concern about the global environment challenge, the first Nobel Laureate! A few years later, I wish you could have been there when our delegation to Rio, the earth summit in Rio in 1992, to see when His Holiness was so gloriously received at that Rio summit, having again recently received the Nobel Prize. It was for the environment, but it was also for consistently advocating nonviolence despite extreme aggression in Tibet. Many of us were privileged to be together 10 years ago—you were there, Richard—for his 70th birthday, in Washington, D.C. I had the privilege to introduce him to thousands of people; a crowd like this was there—seems like yesterday, Your Holiness. When we awarded the Congressional Gold Medal in the Congress, that takes place inside the Congress—but so many people wanted to be there that we had to have an outside program as well—thousands of people traveled from many distances, to be there, to be in the presence of His Holiness. Massive crowds, I wish you could have seen them, turned out to visit him.

When we went on a Congressional CODEL to Dharamsala, our delegation was so moved to see His Holiness in his setting. And yes, Valerie, it was so incredible to see the faces of the little children, being raised in the Tibetan culture, which many children in Tibet would be deprived of that opportunity. It was also moving to see the anguished faces of people newly coming in to Dharamsala over the mountains just to report to His Holiness about the conditions in Tibet. I just associate myself with the characterization Valerie gave because she described it so well. I wish that you could all see how embraced His Holiness – you know how respected he is in the world, it's such a joy to see him in Dharamsala, of course we want to see him in Tibet. Of course, as we see him today, we know that people all over the world would do anything to seek an audience with His Holiness. Tibetans have walked and hiked for months across the freezing Himalayan mountain passes—it is the most perilous escape route on Earth. A month of walking over the mountains, in the freezing cold, they all do this to be in the presence of the Dalai Lama. How blessed we are today to be here for an audience with His Holiness on his birthday celebration.

For almost eight decades, because it started as a child practically, the visionary leadership of the Dalai Lama has been critical to amplifying the voices of Tibetans in Tibet and beyond. His clarion call of freedom for Tibet is a challenge to all who believe in justice, in dignity, and in the power of the human spirit. Indeed, the situation in Tibet remains a challenge to the conscience of the world. Under the Chinese government's continuing occupation of his homeland, Tibetans are losing their culture and their future, and the human rights situation is deteriorating. If freedom-loving people do not speak out against oppression in Tibet because of China's economic strength, then we have lost all moral authority to speak out on human rights anywhere in the world. When I say that to His Holiness, he said he prays that he can rid me of my negative attitudes, but anyway...

As a young person in 1960, though he's always young, His Holiness wrote a beautiful prayer entitled "The Words of Truth" which proclaims: "May all fears from unbearable war, famine, and disease be pacified to freely breathe an ocean of happiness and well-being". His Holiness' vision of happiness and wellbeing, so similar to our founders' promise of life, liberty, and the pursuit of happiness, ensure that people of every faith and every nation have a role to play in improving the lives of others. His Holiness has truly lived this truth.

In reading about His Holiness and the situation in Tibet, I came across a Sanskrit word, Satyagraha, and I learned that word in Sanskrit means nonviolence, and it also means insistence on the truth.

Nonviolence. Insistence on the truth. Isn't this exactly what His Holiness is about? Isn't it what we should all be about? And yes, under his leadership we must in a nonviolent way, a non-negative way, insist upon the truth of what is right for the world and what is right for Tibet. By speaking out against injustice we insist upon the truth by following the dedication of his life to the wellbeing of others and insisting on the dignity of every human being, His Holiness has indeed changed the lives of some of us, he has changed many lives—he has changed the world, he has changed history, and he is changing the future.

Richard Gere and I recently wrote a Wall Street Journal op-ed in praise of His Holiness. We agreed that "there is no better way to honor the Dalai Lama on his 80th birthday than by standing with him and the Tibetan people, vowing to keep their cause alive". Let us celebrate His Holiness with our actions, let us honor his cause with our commitment to justice, let us continue to work to fulfill the wishes of so many, who seek peace. Happy birthday again, Your Holiness. May you continue to change the world with your loving message of global peace through compassion. Richard has said I am looking forward to your 90th birthday. This doesn't sound like much after what Richard and Valerie said, but as we say in Italian, cento anni —may you live a hundred years; a hundred and ten, a hundred and twenty—you will always live in our hearts."