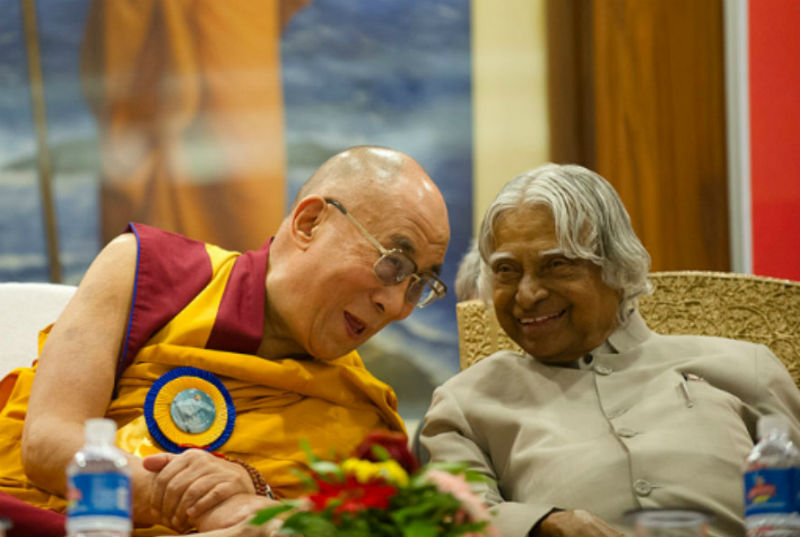 Dharamshala, India, July 28, 2015 – In his condolence message, His Holiness the Dalai Lama of Tibet expressed his deep sadness on learning of the passing away of Former President Dr A.P.J. Abdul Kalam.

His Holiness wrote: "I am very sad to learn of the sudden passing away of our former President, Dr. A.P.J. Abdul Kalam yesterday evening."

His Holiness said that "This is an irreparable loss. He was not only a great scientist, educationist and statesman, but also above all a real gentleman."

"Over the years I had the opportunity to meet and interact with him on many occasions and always admired his down to earth simplicity and humility," the message added.

"I used to enjoy our discussions on a wide range of subjects of common interest, but mainly concerned with science, spirituality and education," it stated.

"I offer my condolences and prayers to his family and the people of India at this sad time," said His Holiness the Dalai Lama.

Former Indian president APJ Abdul Kalam, known as the father of the country's military missile program, died on Monday after collapsing while delivering a lecture, according to media reports. He was 83.

After his presidential term ended, Kalam traveled to remote schools and colleges, speaking to students and inspiring them to follow their dreams.

Even after he left office, he received hundreds of emails each day from high-school students and other young people seeking his advice. He would reply to most of the children who wrote to him.

He played a crucial role when India tested its nuclear weapons in 1998. He also authored several books, notably Wings of Fire, India 2020 and Ignited Minds.

Kalam had a humble beginning. His father owned boats which he rented out to local fishermen. Kalam used to describe himself as "Made in India," as he never trained abroad.