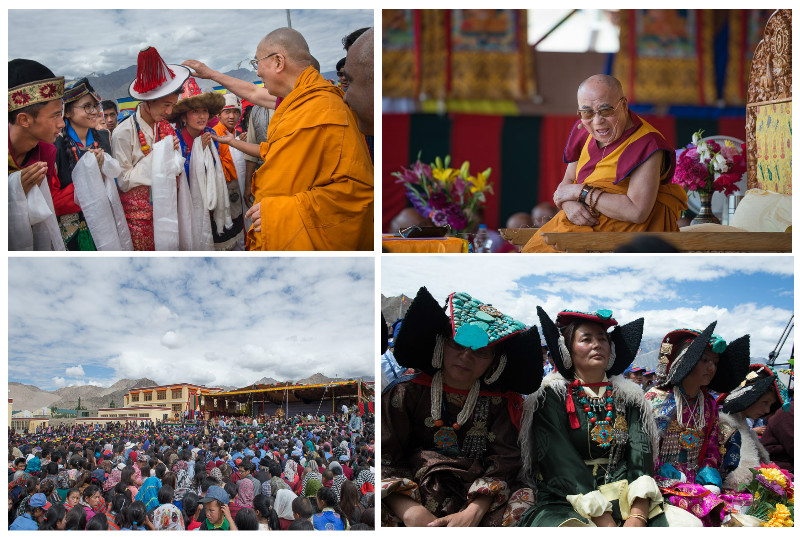 Leh, J&K, India — "The main message of religion is peace," His Holiness the Dalai Lama of Tibet said, adding "All religions tell us to be good human beings."

His Holiness the Dalai Lama arrived in the J&K state of India Monday morning. The spiritual leader of Tibet was formally welcomed by Ganden Tri Rinpoche, Rizong Rinpoche, the young Bakula Rinpoche, Thiksey Rinpoche and many other senior monks and officials.

His Holiness the Dalai Lama began his second day in Leh with a visit to the Jokhang. "However," he added, "the main purpose of both Kangyur and Tengyur is not to be an object of respect, nor to be occasionally ritually recited, but to be studied. The Buddha's teachings are an account of his experience. They reveal his great qualities. You people of Ladakh, laypeople and monastics, should study what the Buddha taught."

Laughing, the spiritual leader turned to his friends among the politicians and teased them saying:

"If you study and put what you learn into practice, it may help you get elected. What's more, when you retire you'll have the opportunity to make the remainder of your life meaningful."

From the Jokhang he drove to the Jamyang School, where several thousand people, most of them students at Leh's schools, had gathered to hear him speak. First of all, he inaugurated a new hostel for girls, making a point of clasping the hands of his politician friends as they unveiled the commemorative plaque together. He then cut the ribbon across the door and tossed flowers and grain into the air as he recited auspicious prayers.

His Holiness walked to the covered stage where he sat down amongst Lamas and local dignitaries. Formal greetings were expressed before students of the Jamyang School stood with folded hands and fervently sang the prayer 'Limitless qualities' composed by His Holiness. In his speech of introduction, School Principal, Geshe Lobzang Samten greeted all present, thanked His Holiness for coming and acknowledged his recent 80th birthday. He called on the people of Ladakh, whatever faith they profess, to continue to maintain the region as a place of peace. He concluded by offering a report of the school's last three years' accounts, with thanks to all donors, principal among them being the Dalai Lama Trust.

His Holiness began his address, speaking sometimes in Tibetan, sometimes in English, which was translated into Ladakhi dialect.

"Today, I'm here in Ladakh mainly at the invitation of Spituk Monastery to attend their summer Perfection of Wisdom debates. Tri Rinpoche mentioned to me that it would be good if I could come. Sometime ago, when I met an old woman from Dah-Hanu I became aware of these people and their unique headdress. I realised that they weren't very well able to look after themselves, nor was their understanding of Buddhism very strong. We established this school particularly with their children in mind. On this occasion the school has asked me to speak to their students and many others gathered from other nearby schools. I'd like to thank the organizers for providing this opportunity and offer my greetings to you all."

He said that he had been asked to talk about the ongoing dialogue between Buddhist science and modern science. He began by clarifying that he never promotes Buddhism as somehow better than other traditions. He views all religious traditions as having religious, philosophical and cultural aspects. The religious aspect, which all religions share in common, includes the practice of love, compassion, tolerance and so on. They differ in their philosophical and cultural aspects. While theistic traditions believe in a creator god, traditions like Jainism and Buddhism that don't teach about causality instead. In whatever way these philosophical approaches differ, their purpose is the same: supporting the practice of love and compassion.

"The main message of religion is peace. All religions tell us to be good human beings. Islam, for example, exhorts its followers to extend kindness to all creatures of Allah, so it's very disappointing to see clashes between Sunni and Shia adherents. I have a lot of admiration for the good sense of community you have among the various faiths here in Ladakh. The conflict between Buddhists and Muslims in Burma, however, is disheartening. Let me repeat my earlier suggestion that Ladakhi Muslims consider whether they could exert a positive influence over their quarrelling Muslim brethren in other parts of the world. What is important, if we are spiritually inclined, is that we take the practice seriously.

"Change in the world comes about through action rather than prayer alone. We've prayed for hundreds of years without much effect. The crucial point is to begin with a sense of the oneness of our human family, an acknowledgement that as human beings we are all the same. What we tend to do instead is to pay too much attention to secondary differences between us of race, nationality, faith, social status and so on."

Returning to the topic of Buddhist science and modern science, His Holiness repeated that he never promotes Buddhism in lands that regard it as a foreign belief, but here in India it is an indigenous tradition. He reminded his audience that when Tibetan Emperor Trisong Deutsan invited Shantarakshita to Tibet, he was making a deliberate decision to seek Buddhist teaching from its original source. Alluding to the advice he had just given in the Jokhang about the Kangyur and Tengyur, he remarked that we pay the Buddha our respects without paying proper attention to what he taught. Saying that it's time to change this custom of blind faith, he asked his listeners if they agreed and they let him know that they did.

"As a result of his analysis of reality, the Buddha explained the cause of suffering. He spoke about the nature of consciousness and how we need to understand the nature of our disturbing emotions. We need to deal with mind within the mind, to examine how anger and attachment are mental phenomena," His Holiness said.

"It's the profound exploration of the mind that originally took place in India that Buddhist science brings to the conversation with modern science. On the other hand while the Abhidharma contains rudimentary explanations of atoms, they have been thoroughly investigated by modern science. Similarly, Raja Ramana's observation that Nagarjuna's writings deal with ideas echoed today in quantum physics indicates that the dialogue between Buddhist science and modern science can be mutually beneficial."

Noting that modern education is dominated by materialistic views, His Holiness suggested there is a need to encourage greater warm-heartedness by including secular ethics in the curriculum. What this means is learning to constrain our negative emotions while developing constructive ones. He commended to the audience a book recently published in Tibetan that compiles Buddhist science from the Kangyur and Tengyur. Translations of it into other languages are under way.

His Holiness had been keen to take questions from the audience. The first concerned Buddhist attitudes to belief in a creator and he replied that it is a very powerful idea that can provide great confidence. Asked whether the Buddha accepted the existence of other religions, His Holiness confirmed that he did and recommended studying and examining other points of view, because doing so is an effective way of extending our understanding. Being aware of other traditions makes for greater open-mindedness.

He spoke of a suggestion he has made that India, as a multi-religious society with a long history of spiritual harmony, convene an international inter-religious conference much as it conducted celebrations of the Buddha Jayanti in 1956. He further proposed inviting Muslim militants and by providing an opportunity for an exchange of views allow their emotions to cool and seek peaceful, positive solutions.

To a question about whether the Buddha or his teaching came first, His Holiness remarked that the continuity of mind, whose nature is clarity and awareness, has neither beginning nor end. Buddhism asserts different levels of consciousness of which consciousness of the waking state is the coarsest, that of the dream state is subtler, and that of deep sleep is yet more subtle. The subtlest level of consciousness dawns at the time of death. There are cases that have attracted the interest of modern science of people whose bodies remain fresh for from days to weeks after their apparent clinical death. The Buddhist explanation is that the subtlest consciousness and its accompanying subtle energy remain present. Research and investigations of the phenomenon continue.

Answering one of the final questions, His Holiness explained:

"All beings want to live a happy life, but only human beings have the ability to analyze its causes. Although the mind is fundamentally pure, when we develop anger, attachment or even compassion, it seems that the mind is suffused with that emotion. Anger is a disturbing emotion based on wrong view, the misconception of things having intrinsic existence, itself based on the way they appear. Constructive emotions arise on the basis of a correct view of reality.

"The Buddha taught according to his own experience. A 21st century Buddhist understands that the Buddha's teaching has nothing to do with faith, rituals and blessings.

His Holiness was offered lunch at Jamyang School before returning to Spituk Monastery in the afternoon.