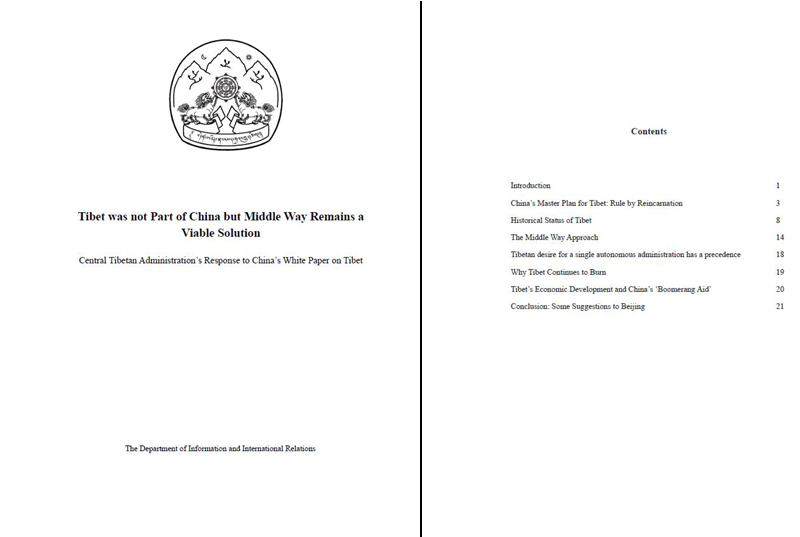 Dharamshala — In response to the most recent white paper regarding Tibet issued by the Chinese Communist Party in August, the India based Central Tibetan Administration has released a 21-page document attempting to set the record straight regarding the historical timeline China has claimed.

While China observed its 50th anniversary of the establishment of the 'Tibet Autonomous Region,' the 21-page document entitled 'Tibet was not a part of China but Middle Way remains a viable solution,' was released by Sikyong Dr Lobsang Sangay, accompanied by DIIR Secretary Sonam Norbu Dagpo, DIIR Secretary Tashi Phuntsok and Tibet Policy director, Thubten Samphel.

The CTA revisits the elongating historical claims that China stakes over Tibet. Reminding us that, "the white paper on Tibet in 2004 claims that 'Tibet became part of the territory of China in the 13th century.' On the other hand, the Chinese Republican-era scholars assert that Tibet became a vassal state of China during the Qing period (1644-1911). Now, with its latest white paper, China has again shifted the goal post and states that Tibet has been an integral part of China since 'antiquity'."

The CTA goes on to refute each of China's claims, revisiting the history of the region. In terms of the vague 'antiquity' that China most recently claims, the rise of the Tibetan Empire was in the seventh century CE, when both the King of Nepal and Emperor of China courted the Tibetan Empire and each offered their daughters to the Tibetan Emperor for marriage.

The first to suggest that this claim to Tibet holds no weight was the former Vice-chairman, of the standing committee of the National People's Congress of China, who refuted his own government's claim in 1989, saying, "some historians claim that Tibet had been a part of China from antiquity, some others claim since the time of Tibetan king Songtsen Gampo through his marriage to the Chinese princess. I do not agree with both these views. When you talk about antiquity, there is no time line or if it is from the time of Songtsen Gampo's marriage, we all know that the first queen of Songtsen Gampo was Nepal's princess in which case Tibet should be part of Nepal. How can we explain this?"

Going on to counter the claim that Tibet became a part of China during the 13th century, the CTA revisits Tibet's history with Mongolia at the time. "The Yuan dynasty was a Mongol empire and its ruler Genghis Khan and his successors conquered vast territories in Europe and Asia, including China. By 1279, the Chinese Song dynasty in southern China fell before the advancing Mongols. The Mongols' conquest of China was complete. Today, China claims the Yuan Dynasty to be its own dynasty and, by doing so, it lays claim to all Mongol conquests, at least in the eastern half of the Mongol Empire."

However, a Tibeto-Mongol relationship was established in 1240, when a Mongol expedition was launched to Tibet, thus leading to a religious relationship between the Mongol leaders and Tibetan religious hierarchs. It is well known that Kublai Khan embraced Tibetan Buddhism, adopting it as the official religion of his empire. "In gratitude, Kublai Khan offered his Tibetan lama political authority over all Tibet in 1254, conferring various titles on him. This Tibeto-Mongol relationship continued to exist even after the fall of the Yuan Dynasty."

The dates of these expeditions, relations and invasions fail to match the timeline that the Chinese government claims. "The year of Mongol military expedition to Tibet in 1240 preceded the Mongol invasion of China's Song Empire in 1279 by 39 years. This debunks China's claim over Tibet based on the relations between Mongol Empire and Tibet's Sakya Lamas." The CTA concludes that even if by transitive property all Mongol conquests were in fact Chinese conquests, the Tibeto-Mongol relationship predated the fall of the Chinese Song Empire.

Finally, in opposition to China's final claim that Tibet was acquired during the Qing Dynasty, the CTA's response uses a statement made by the imperial envoy and commander of the Manchu army, General Fu K'angan, to the Eighth Dalai Lama in 1792, showing the nature of the 'regulations' imparted by the Manchu emperor after he assisted the Tibetans in expelling the Gorkhas from Tibet. The statement clearly exudes the Emperor's context as a protector or assister, rather than a ruler ordering his subjects, as the statement ends with, "The Tibetans may, therefore, decide for themselves as to what is in their favour and what is not or what is heavy and what is light, and make a choice on their own."

Furthermore, after the conclusion of all the history that China claims made Tibet a part of China, it was in 1914 that Tibet signed a bilateral treaty with British India called the Simla Agreement, legitimizing Tibet's independent status. Mao Zedong himself remarked after the long march that China's only foreign debt was to the Tibetans for the provisions we owe them.

The CTA succeeded in using the history against China to refute their broken record that Tibet was at any point in history, part of China. The CTA suggests that the recent most intrusion into Tibet's history is a blatant attempt of the Communist party to doctor history, to literally stretch the truth, in attempt to legitimize their continued occupation of the region, when in reality the history is against them.