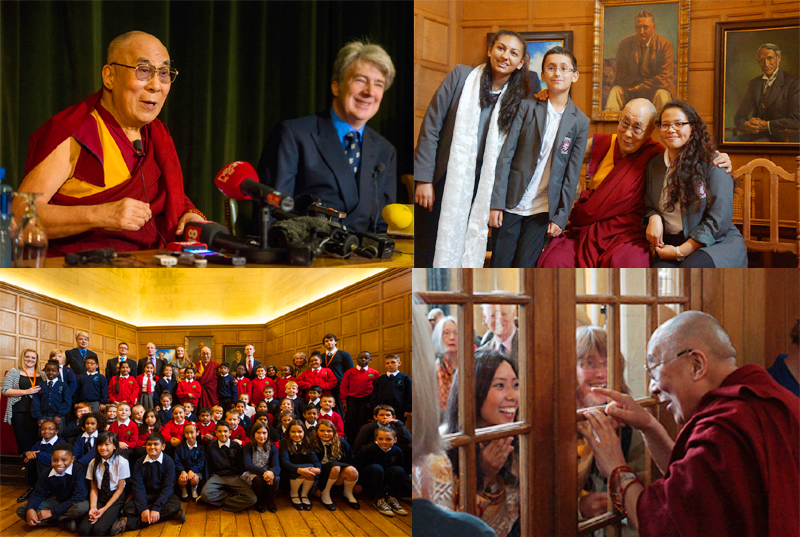 Oxford, UK — "Changing the world is up to us. If each of us tries, the next generation may see a happier, more peaceful world emerge," said the spiritual leader of Tibet His Holiness the Dalai Lama. His Holiness was speaking at Magdalen College in Oxford Monday at the start of a nine-day visit to the UK.

"We can't change the past and the future is yet to come, but its causes are in our hands. We can change the future. The 20th century generation to which I belong created all sorts of problems that it will be up to you to resolve," said His Holiness the Dalai Lama while interacting with school children on the topic of 'Some Lessons from Life' at Magdalen College's Rhodes House in Oxford, UK on September 14, 2015.

"You are our source of hope, so perhaps the end of the 21st century will be peaceful and happier. Instead of focusing on secondary differences between us, we need to think of how we are interdependent and that all human beings belong to one big family," His Holiness said.

"Demilitarization and disarmament may seem like a dream, but you could make it real and create a happier more peaceful world," His Holiness said, adding "the future is in your hands, but for it to be peaceful and happy requires a sense of compassion and concern for others' well-being. To make this a reality involves incorporating secular ethics, universal values, into education."

Three groups of children asked questions. The first was about Syrian refugees. His Holiness voiced appreciation that their problems are beginning to be taken seriously. He noted that it is necessary to be practical because taking them in requires in the long term providing them with education, support and jobs. Even more important is resolving the problems in their own countries that cause them to become refugees.

The second group of students told His Holiness they had three rules: "Be kind, be kind and be kind." His Holiness agreed saying "That's right because our own welfare is related to the rest of humanity. We have to think of the welfare of all human beings."

The third group offered him a basket of eggs from the chickens they look after.

Speaking to Fellows of the Dalai Lama Centre for Compassion (DLCC), His Holiness suggested that despite it being the beginning of the 21st century, we are hampered by old ways of thinking that give rise to man-made problems.

He cited the way Russia and China have recently mounted displays of military strength, proudly showing off their weapons. "We need to acknowledge that we all want to be happy and don't want suffering. To do that we need to improve education and raise awareness."

To a suggestion that it may soon be possible to eliminate pain by taking a pill, His Holiness declared himself sceptical that mental unease could be overcome the same way. He said:

"I doubt that this will allow us to overcome our disturbing emotions. They are part of the mind and need to be tackled within the mind. What's much more important is coming to understand the whole system of emotions. This is something ancient Indian psychology had a profound understanding of. Tibetans have nurtured and kept this knowledge alive."

His Holiness spoke of three divisions of the content of traditional Buddhist literature: science, philosophy and religion. Of these, science and philosophy can be of interest to anyone on an academic level, while the religious aspect is the business of Buddhists. His final suggestion was to explore how to combine compassion with a proper sense of reality.

Meeting members of the Oxford Tibetan Studies Department after lunch, they first presented him with a volume they had all signed in tribute to Anthony Aris, who is gravely ill.

In his remarks His Holiness mentioned that when Buddhism came to Tibet it was relevant and useful. Warlike Tibetans became more compassionate and peaceful. He counseled them to consider what in Tibetan studies would be relevant today and told the story of a former Tibetan official who was working cleaning vegetables in the USA.

His colleagues noticed that he set worms and bugs aside and took them out to release them at the end of his shift. When they asked what he was doing he told them that Tibetans have a deep reverence for all forms of life, and that there was no need to kill these creatures. Soon, many of them too began to follow his example.

"Tibetans have their own culture," His Holiness said. "It's not Chinese culture and it's worth preserving. What's more, it's culture, language and religion that unify Tibetans today."

In the final gathering of the day, part of the inauguration of the DLCC, in conversation with his old friend Alex Norman, His Holiness recounted lessons from his own life. He stressed the need to encourage education, which he regards as our only hope. He observed that while the religious and philosophical aspect of religion may be fairly constant, where cultural aspects are out of date, they need to change.

Once again emphasising the need for secular ethics he noted that while Dr Ambedkar and India's first President, Rajendra Prasad, were deeply religious, the constitution they drew up for newly independent India was strictly secular. He repeated that such a secular approach continues to be relevant and appropriate today.

He also suggested that scientific findings indicate that basic human nature is compassionate. Meanwhile common sense tells us even if it is not very well off, the family that is kinder and more compassionate is happy. The wealthy who lack basic affection and are afflicted by jealousy are unhappy.

When challenged, he replied that there is certainly a role for religion, but because this or that religion will never have universal appeal, secular ethics is more relevant today. Asked for any final advice for the people before him, he replied:

"Be realistic. When the old pretend to be young and the foolish pretend to be intelligent, it is better to just be realistic. Changing the world is up to us. If each of us tries, the next generation may see a happier, more peaceful world emerge."