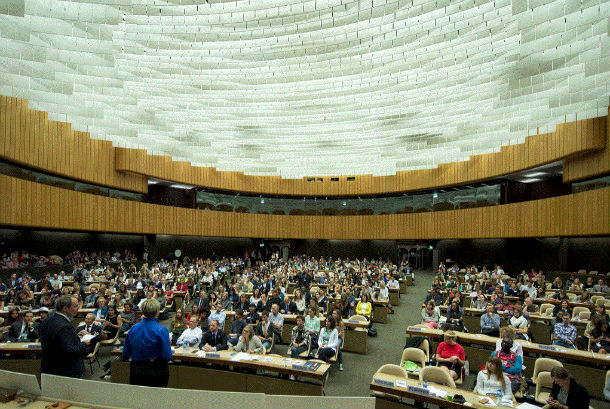 Geneva — During the 30th session of the United Nations Human Rights Council in Geneva, on 21 September 21, Luxembourg speaking on behalf of the EU and the United States, expressed deep concern over the deteriorating human rights situation in China, Tibet and Eastern Turkestan (Ch: Xinjiang).

It said, "In China, the recent mass arrest of human rights lawyers and human rights defenders has raised serious questions about its commitment to strengthening the rule of law."

"China should release all those detained for seeking to protect the rights of others and for exercising their freedom of expression and association, including Liu Xiaobo, Ilham Tohti, Gao Yu and Pu Zhiqiang," it said.

"China should also promote an enabling environment for civil society activity and take into account deep concerns about the draft law on foreign NGOs and the recently adopted national security law.

Lastly, the EU urges China to address the root causes of unrest and foster dialogue with and between different ethnic groups, especially in Tibet and Xinjiang," the EU delegation stated.

The US Permanent Representative Mr Keith Harper delivered a statement which called upon the Council's attention and commented "China has detained nearly 300 lawyers and activists since July; we call for the immediate release of 27 who are still in custody, as well as Ilham Tohti, Shokjang, Zhang Kai, Pu Zhiqiang, Gao Yu and Liu Xiaobo."

"Draft NGO and national security laws unreasonably constrict civil society. We urge China to cease undue restrictions on religion in Tibet and Xinjiang and stop church demolitions and cross removals in Zhejiang, which contravene international standards," the US Representative said.

Other countries, including Germany, Ireland, Netherlands, France, UK, France and Switzerland, have stood by the EU statement, expressing concern over "human rights violations" in China, Tibet and Eastern Turkestan, especially the recent abductions and detentions of "human rights lawyers and activists."

Simultaneously, on behalf of the Society for Threatened People, NGO in Special Consultative Status, Mr Dawa Tsultrim from the Office of Tibet, Switzerland, delivered an oral statement during the 1st session under Agenda Item 4 and submitted a written statement.

Germany raised concerns over about the human rights situation in China and urged China to reconsider the adoption of laws that would restrict freedom of expression.
Mr. Frank Jarasch, Counsellor and Head of Political Affairs of Permanent Mission of Germany to the UN said, "Germany alliance itself with the statement made on behalf of the EU. Germany is worried about human rights situation in China and it has continued to deteriorate.

"We also urge the government to reconsider the draft law for foreign NGOs. This law in conjunction with the recent draft national security law and draft counterterrorism law, which potentially restricts independent civil society and freedom of expression," he added.

Switzerland expressed concerns about the human rights situation in China. "Switzerland remained concerned with the reactions of the Chinese authorities against more than 200 lawyers and their families in China. We call upon the Chinese authorities to guarantee their fundamental rights, includes the right of access to a lawyer," said Ms Barbara Fontana.

United Kingdom raised concerns over the human rights situation in China. "UK remains concern by restriction of freedom of expression in China. That incldudes recent detention of defense lawyers such as Wang Yu. We urge authorities to release all these individuals to hold their peaceful expression of views," said Mr Ian Duddy.

Belgium then raised concerns over human rights violations in China. It called on "China to put an end to repressive measures against political opponents and activists."

Human Rights Watch said that the Council had demonstrated inefficiency in human rights protection all over the world. "China, Azerbaijan and Tajikistan also required further attention of the Council. "

International Federation for Human Rights Leagues called on all States to urge China to cease its targeting of human rights defenders and to immediately release those arbitrarily detained.

"The Chinese government embarked on a sweeping and systematic effort to harass, detain, and silence human rights defenders and lawyers, their supporters and colleagues, and even their families," Mr Nicolas Agostini said, adding: "The Council should speak out strongly against such blatant backpedalling on human rights by a Member State."

"We call on all States to use the platform of the Council to urge China to cease its targeting of human rights defenders; immediately release all those arbitrarily detained; respect and enable the exercise of the rights to freedom of expression, association and assembly; and provide for transparent investigations and adequate remedies for those affected," Mr Agostini further added.

In response, China said that "human rights issues should not be used for interference in other countries' internal affairs." China also refused accusations made during the session, including on China's ethnic policy.

The Human Rights Council said "speakers have raised allegations of human rights violations in countries and regions around the world and reiterated the Council's responsibility to address all situations of concern" that require the Council's attention.

The delegations "voiced concerns over restrictions on freedom of expression in a number of countries, and condemned attacks against civilians in conflict situations," the UNHRC said, adding they also "raised concerns relating to specific country situations."

The UN Rights Council also said that "Several speakers reiterated their concerns over the politicisation of this agenda item of the Council, and expressed support for a non-selective and dialogue-based approach instead."