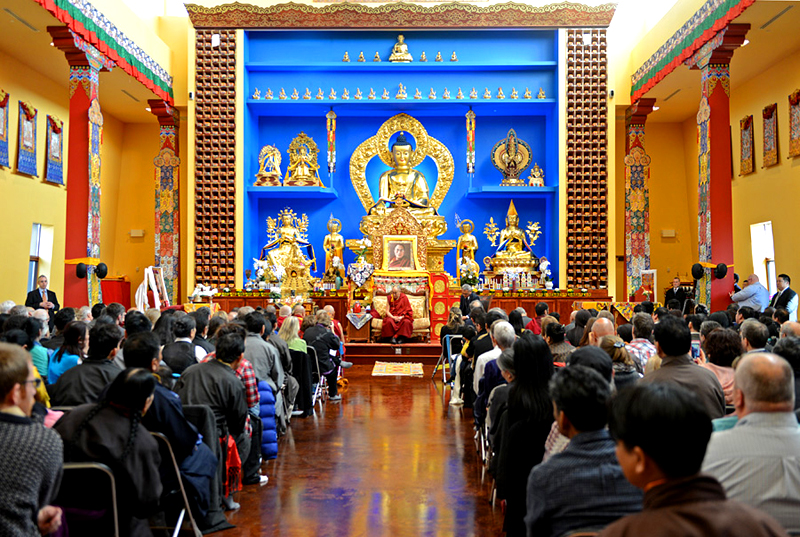 Madison, Wisconsin, US — Explaining that more and more people are showing an interest in Buddhism, the spiritual leader of Tibet said it would be better if Buddhist centres were not only temples for worship, but academic centres of learning, somewhere that could be a focus for the study of Buddhist philosophy and science of the mind.

About 300 people gathered in the temple at Deer Park Buddhist Center in Hamilton County, Ohio, United States to listen to the spiritual leader of Tibet, His Holiness the Dalai Lama, on March 6, 2016.

"I'm very happy to be here again, although Geshe-la is no longer here. I'm happy to see that his students and followers are fulfilling his wishes. The great masters of the past like the Buddha himself and Nagarjuna are no longer with us, but their teachings have survived for more than 2000 years.

"As a follower of Buddha Shakyamuni, I am proud to think of myself as a simple Buddhist monk, just as I am also proud to consider myself a student of Nagarjuna. These great teachers, great thinkers, great philosophers and logicians did not rely on the Buddha's teachings just because they were his own words; they analysed and investigated them. The Buddha advised that monks and scholars who followed him should examine what he said in the light of reason.

"Subsequent Indian teachers like Nagarjuna, Chandrakirti, Buddhapalita and Bhavaviveka did just that. Likewise, over the last 30 years I have engaged in dialogue and discussions with modern scientists, one of whom, Richie Davidson, is sitting here with his wife. I've learned a great deal from Richie, who investigates and analyses things like a student of Nalanda. As a student of Nalanda myself, I have publicly rejected ideas like the existence of Mt Meru and a flat earth, despite the unease of some abbots and scholars."

His Holiness went on to say that the Buddha's teachings and the Nalanda tradition in particular are entirely based on reason. He said that Nalanda flourished as a centre of learning for several centuries, but now lies in ruins. The Chinese Buddhist tradition also derives from Nalanda, but only in Tibet were the works of logic by Dignaga, Dharmakirti, Shantarakshita and Kamalashila preserved. Today, His Holiness said, not only do translations of these books survive, but so does a thorough-going understanding of them.

"Geshe Sopa was among those scholars who escaped from Tibet," His Holiness observed, "who contributed to our ability to re-establish our monasteries in India, where 10,000 monks now study. What's more there are now people elsewhere who are taking an interest in Buddhist logic and science of the mind from an academic viewpoint. Until 1959 there were people who thought of Tibetan Buddhism as 'Lamaism', not as a true tradition of Buddhism. Since 1959, an appreciation has grown that if you want to know what Nagarjuna or Dignaga taught, you can look to the Tibetan tradition. I have made an effort to show that Tibetan Buddhism belongs to the genuine Sanskrit Buddhist tradition.

"Today, although America is not traditionally a Buddhist country, more and more people are showing an interest in Buddhist philosophy and science of mind, small centres have come up here and there. However, it would be better if they were not only temples for worship, but centres of learning. I have urged people in places in the Himalayan region, like Ladakh, to ensure that even caretakers of temples should have sufficient training to be able to explain to visitors what they can see there. Even small monasteries can function as centres of learning.

"Here, due to the late Geshe-la's determination, we have a quite well-established centre. You can do practice here, you can perform rituals too, but the important thing is to think of the centre as like a classroom. Since you have people here who are well-qualified to explain the teachings, you should hold classes about the science of mind that can appeal to everyone."

His Holiness pointed out that the traditional texts dealing with the science of mind are based on the 'Treatise on the Compendium of Valid Cognition (Pramanavartika)' and the 'Treasury of Knowledge' (Abhidharmakosha) and do so from the point of view of the Sautrantika and Chittamatrin schools of thought.

However, he said, there is also a text by Gyen Lobsang Gyatso, the founder director of the Institute of Buddhist Dialectics, who was murdered by Shugden people, called a 'Higher Study of the Science of Mind' (Lo-rig Gong-ma). In composing it he drew on the works of Nagarjuna and Tsongkhapa to present a science of mind from the subtler point of view of the Prasangika Madhyamika school of thought. Ultimately this derives from ancient Indian knowledge of the mind.

He said that in the past in Tibet, only monks were involved in this kind of study as if it was their sole right. Now, laypeople and nuns are taking part. Indeed, His Holiness will shortly be taking part in a ceremony to award nuns with Geshe-ma degrees. Soon there will be nuns and laypeople among the top scholars. He jokingly reported the grumbling of monks from monasteries that perform rituals in people's homes that laypeople should not be taught so much because it leads them to ask questions they cannot answer.

"As interest in understanding the workings of the mind and emotions grows in foreign countries," His Holiness said, "there will grow a need to debate with scientists who do not accept there is any mental function apart from the brain. Therefore, centres like this should be centres of learning.

"In addition, they should provide opportunities for inter-religious dialogue. All the major religious traditions convey the same message of love, whether they teach about a creator or not. If we are to create a happier humanity and lead more meaningful lives, we have to learn to show each other greater love and affection. We see many wonderful practitioners of these virtues among Christians, Jews, Hindus and Moslems. It's because people have different aptitudes and dispositions that there is a need for such differences of approach.

"There are cases where religion is used to exploit people's fears, but this is completely inappropriate. When the Buddha taught the truth of suffering he did so only in the context that he taught its cessation and the path to that cessation. I'm reminded of the story of someone arriving at a monastery in Kham and asking to see the abbot. His attendant replied that he wasn't there because he'd gone to the village to frighten the old people. This is a sign of the degeneration of the Nalanda tradition. Nothing in Buddhism should lead to people feeling frightened.

"I request you to make this a centre of learning not confined to a narrow-minded sense of 'lamaism', but dedicated to a rich tradition of understanding that requires us to use our brains to the full. I look forward, when I come again, to seeing the classes you are holding and meeting the professors who teach them. I hope you can also extend links to the University of Wisconsin."

"I'd also like you to know that we have prepared books in Tibetan containing Buddhist science and philosophy extracted from the Kangyur and Tengyur. These are presently being translated into a number of languages such as English, Chinese, Japanese and German, and should be available by the end of the year. These textbooks can form the bases of classes in the future."