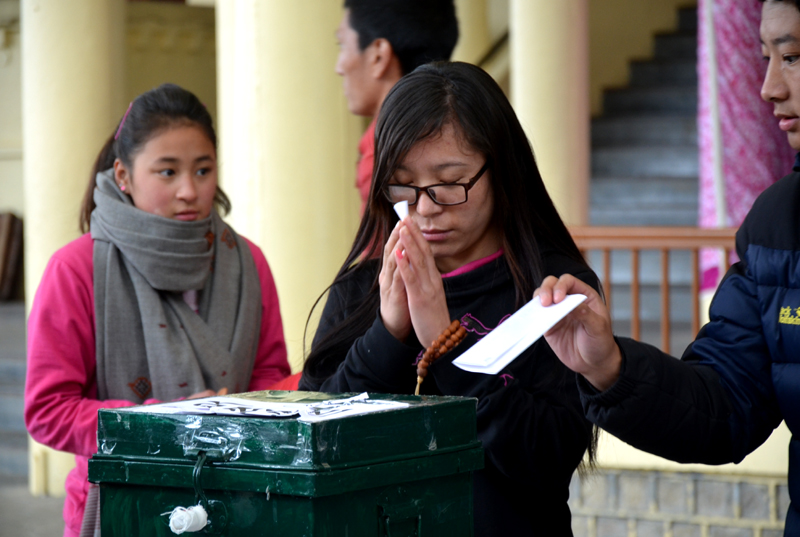 Dharamshala — Tens of thousands of Tibetan exiles on Sunday voted around the world to elect their nominees for the post of 'Sikyong' or political leader and the 45 members of the Tibetan parliament-in-Exile, in a bid to maintain their non-violent struggle for freedom, which based on truth, justice and non-violence.

Tibetan monks and nuns in crimson robes lined up along with thousands of men and women in schools, government buildings and the courtyard of the main Tibetan Temple in Dharmshala, India where the Central Tibetan Administration is based, to cast their votes for political leader and parliament. Polling was carried out at 85 different places around the world.

This is the second such election since His Holiness the Dalai Lama retired as political leader of the Tibetan government in-Exile four years ago, handing over power to a democratically elected leadership.

Dr Lobsang Sangay, the incumbent Sikyong and Mr Penpa Tsering, the Speaker of the Tibet Parliament in-Exile, arrived at the Gangchen Kyishong polling place on Sunday morning, in order to cast their votes. The story of the elections was covered by the Indian, Tibetan and foreign reporters.

Both candidates reiterated their commitment to the Middle Way Approach and resumption of meaningful dialogue with the Chinese government would be their main priority.

"The dialogue with China will be the main initiative," Dr Lobsang Sangay, who is running for re-election, told reporters.

"I hope Chinese President Xi Jinping in his second term in 2017 will relook at the Tibet issue. If you look at the past history, when Deng Xiaoping fully consolidated his position in the late 70s and early 80s, he initiated the dialogue. Under Jiang Zemin, he touched the Tibet issue late in his second term and hence our envoys went to China. So hopefully Xi Jinping will take the initiative but the ground reality is repression still continue," he said.

Speaking on the development of Tibetan democracy in exile, Dr Sangay said "It is possible for China to embrace democracy. Kindly see our good example of Democracy. If implemented, it will benefit both China and Tibet."

Speaking on why Tibet is an important issue in India-China relations, he said that Indian government sees Tibet as an issue, not just on human rights front but also from geopolitical, environmental and climate change point of view.

"The reason why we are in exile today, is because of the political situation inside Tibet, so we have to find all ways and means to to reach out to the Chinese leadership, to resume negotiation," the incumbent speaker of the Tibetan Parliament, Mr Penpa Tsering said. He further added that "I will try every possible means and ways to resume dialogue and resolve the Tibetan issue as soon as possible."

In Sunday's final round of voting, nearly 90,000 exiled Tibetans in about a dozen countries from Australia to the United States are registered to cast ballots for a Sikyong and for a new exiled 45-member Parliament. The voter turn out was approximately 53% of registered voters.

Voters have turned out in large numbers for primaries last year to exercise their democratic right to select their leaders in a peaceful and orderly manner. Some of the other countries where the elections are taking place included Japan, Russia and Australia. A total of 47,105 Tibetans voted in the preliminary round in October last year.

Estimates show that nearly 60% of the approximately 150,000 Tibetans worldwide are above the age of 18 and are eligible to vote. A total of more than 90 candidates are in the fray. The official results from Sunday's voting are expected on April 27.

A foreign delegation comprising members of the European Parliament is here in Dharamshala as part of the Tibetan election observation mission. Last year, a foreign delegation representing the Asia Democracy Network (ADN) and the Asian Network for Free Elections (ANFREL) observed the preliminary elections.

The five-year term of incumbent Sikyong Dr Sangay will expire in August. He took over the reins of the government-in-exile from Tibetan-scholar Samdhong Rinpoche, who held the post for 10 years.