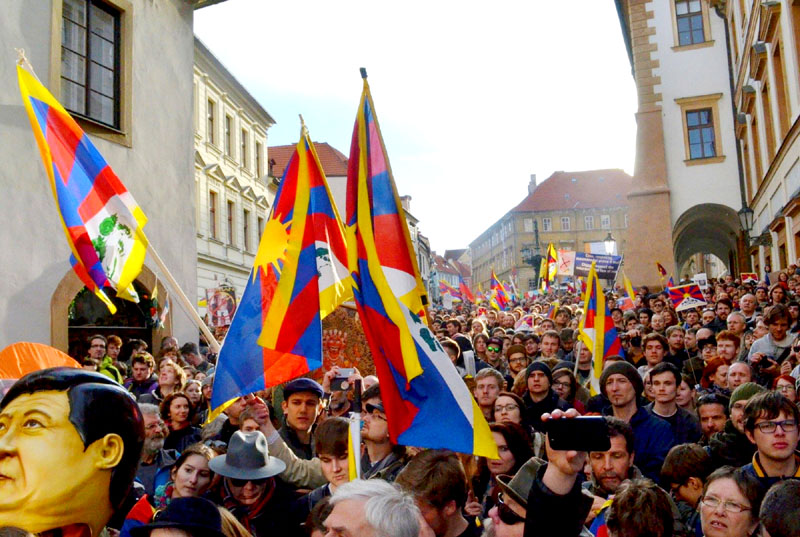 Prague — Hundreds of supporters rallied in central Prague”to protest against Chinese president Xi Jinping's visit, waving Tibetan national flags and they took up a number of chants including “Long live Havel,” “This isn't Beijing,” “We don't want a panda,” “We break with Miloš,” and “Freedom for Tibet.

Many in the crowd had been in an earlier rally at Kampa Park, near a palace where Xi Jinping met with Czech Prime Minister Bohuslav Sobotka (Social Democrats, (CSSD).

Over 500 people attempted to protest Xi's visit at the square in front of Prague Castle but were turned back by police.

Several Czech politicians include the OP 09 chairman Miroslav Kalousek and Member of European Parliament Jaromír Štetina (TOP 09) were among those at the front of the crowd of people waving Tibetan flags and carrying pictures of former Czech president Václav Havel with His Holiness the Dalia Lama.

Most of the protesters then went to Park Maxe van der Stoela in Prague 6, where Bursík and Kocáb addressed the crowd with amplification. They called for the Czech Republic not to weaken its strong human rights record.

The lawmakers for the Czech conservative opposition TOP 09 also put up two Tibetan flags from the windows of the Chamber of Deputies today, former TOP 09 leader and foreign minister Karel Schwarzenberg has told journalists.

The Tibetan national flag is a potent symbol for all Tibetans, and to see the flag flying high across the world shows support for and solidarity with Tibetans inside Tibet and in exile. It is currently banned in Tibet.

President Xi arrived on a three-day visit to the Czech Republic on Monday, March 28, Czech media "Ceske Noviny" reported. Zeman and Xi signed a strategic partnership agreement on Tuesday. China has such deals with about 15 European countries.

It is right to demonstrate against the dictator who allows mass executions and who has introduced the cult of his personality and strict censorship, Schwarzenberg said.

"However, there is even a strong reason to protest against the approach of our big shots. I have never come across such a servility as I can see now," Schwarzenberg said.

"Even Hacha never invited Hitler there (to the presidential chateau in Lany, where Zeman met Xi on Monday)," he added.

Emil Hacha was president of Czechoslovakia in 1938-1939 and the president of the war-time Protectorate of Bohemia and Moravia (1939-1945).

When Xi Jinping was driving from the Prague airport to the city center after his arrival, his route along the Evropska (European) Street was lined with Chinese flags, which provoked mass protests.

"However, people are angry at the big shot aesthetics, the moment when European Street became again Lenin Street (as it was called under the communist regime). All of us remember how comrade Brezhnev was welcomed there," Kalousek said, adding that the Czech Republic did not deserve this.

Over 500 Czech supporters gathered in the Czech capital to protest against the visit of the president Xi, carried Tibetan flags and posters, including a giant photo of His Holiness the Dalai Lama, alongside one of former president Vaclav Havel (1936-2011), a former dissident and human rights activist.

Schwarzenberg said it was bad that the Czech Republic was abandoning its foreign policy and its foundations.

Before Xi's arrival in Prague, Zeman said that the Czech Republic is an independent country once again now and it forms its own foreign policy based on its own interests. "It was our own policy that we defended the human rights, also in Tibet, but we were never under any pressure," he added.

Zeman was the only European Union leader to attend China's celebrations of the end of World War II last year and said he hoped his country becomes "an entry gate" for China to the European Union.

Tibet was invaded by Communists China in 1949. Since that time, over 1.2 million out of 6 Tibetans have been killed, over 6000 monastaries have been destroyed, and thousands of TIbetans have been imprisoned.