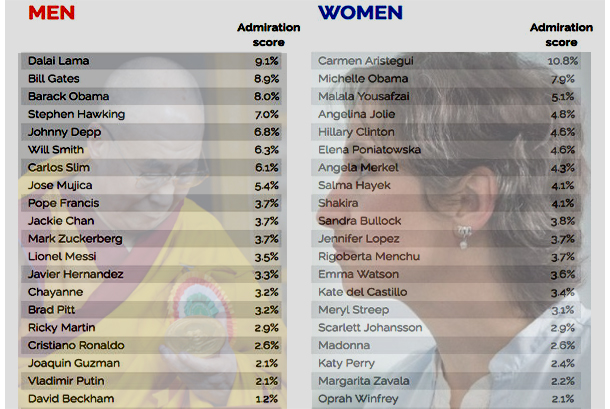 Mexico City — The spiritual leader o Tibet His Holiness the Dalai Lama and Mexican journalist Carmen Aristegui topped the list of most admired people among Mexican Internet users according to the pollster YouGov.

An "admiration score" developed by the market research firm for its World's Most Admired survey put Aristegui at the top of the list of most admired women among Mexicans, followed by U.S. First Lady Michelle Obama, Pakistani activist Malala Yousafzai, actress Angelina Jolie and U.S. presidential hopeful Hillary Clinton to make up the top five.

There were just four Mexicans on the men's list, led by businessman Carlos Slim in seventh place, soccer player Javier Hernández in 13th, Joaquín Guzmán in 18th and President Enrique Peña Nieto in 23rd (just ahead of another U.S. presidential hopeful, Donald Trump).

Even Russian President Vladimir Putin made the top 30 in Mexico, placing ahead of Peña Nieto (and one behind Guzmán) at 19th.

On the women's list were four Mexicans in addition to Aristegui. They were writer Elena Poniatowska in sixth place, actress Salma Hayek in eighth, actress and Guzmán associate Kate del Castillo in 14th and politician (and wife of former president Felipe Calderón) Margarita Zavala, who wants to run for president in 2018, in 19th spot.

Actors, singers, politicians and soccer players were among the majority on both men's and women's lists of the most admired.

YouGov conducts its poll by first asking for nominations from panelists in 30 countries, each of whom is asked to name the person he or she most admires. From those names a list is compiled of the 20 men and women who received the most nominations, with an additional 10 popular people added to the lists for individual countries.

YouGov qualified its results by noting that Internet penetration was so low in 10 of the countries that the sample could only be said to be representative of the online population. Mexico was among those.