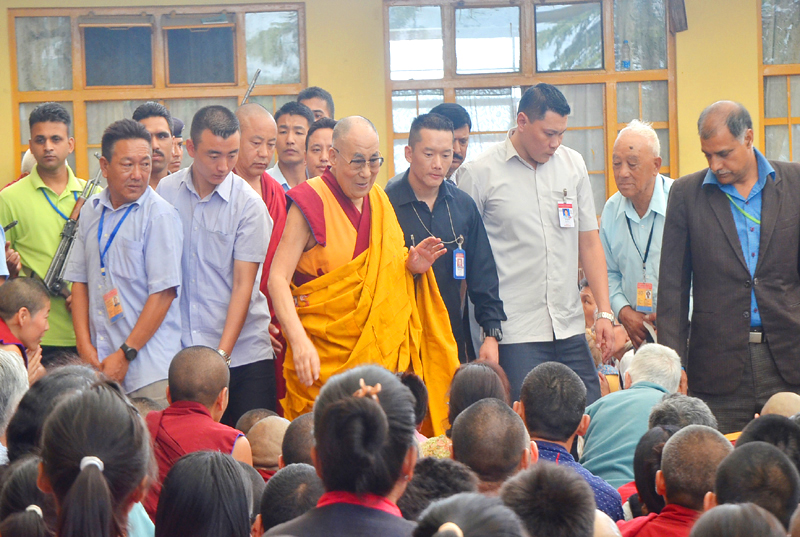 Dharamshala, India — Whilst delivering teachings on Domthonpa's Tree of Faith, the spiritual leader of Tibet, His Holiness the Dalai Lama underlined the need to understand Buddhism in order to develop a happier person.

His Holiness the Dalai Lama concluded his three-day Buddhist teachings on Friday which was held from 01-03 June at the main Tibetan temple in Dharamshala, India. The teachings, attended by over 10,000 devotees, including more than 3000 young Tibetan students, mostly from Tibetan Children Village.

Speaking on generating the awakening mind of bodhichitta, His Holiness quoted Maitreya's 'Ornament for Clear Realization', which defines bodhichitta as the intention to become enlightened for the sake of all sentient beings.

The Tibetan spiritual leader went on to say: "Whenever sentient beings think of themselves, they have a sense of 'I' in relation to their body and mind, their family and friends. Human beings have a sense of 'I' as the controller of their psycho-physical aggregates. But Buddhist teaching rejects any such objective existence of the self. It rejects any perception of a solidly existent 'I'."

"If you only think of yourself, you put yourself at a disadvantage. If, instead, you open your heart and extend your concern to others, you'll be free of fear and anxiety. If you think of all sentient beings as being like you in not wanting suffering, self-cherishing will be reduced. Look at those around you," he said.

The Nobel Peace Prize laureate added: Those who are respectful and concerned about others tend to be happier, those who are more self-centred are less so. Think of those who share their sweets and whatever good things they have and those who keep them to themselves—which of them seems to be happier?

"As young Tibetans, extend the scope of your thoughts to others, to the 6 million Tibetans in Tibet, to the other people of Asia, to the whole world's population and to all sentient beings. Bodhichitta is the mind intent on attaining Buddhahood for the sake of all sentient beings. It includes two aspirations, the thought to benefit others and the thought to realize Buddhahood."

His Holiness spoke of how 40 or 50 years ago he thought bodhichitta was admirable but that it was too difficult to develop. Then in 1967 he received an explanation of the 'Guide to the Bodhisattva's Way of Life' from Khunnu Lama Rinpoche, who suggested that he also teach it as often as he could. Slowly his interest grew and, he said, he began to feel bodhichitta was more approachable.

Shantarakshita said that those of sharper intelligence develop an understanding of emptiness first and cultivate bodhichitta on the basis of that—His Holiness said he includes himself in that category. He stated that he has thought about emptiness since his twenties, but the important thing in the end is to combine the two ideas.

During the ceremony for generating the awakening mind, His Holiness aslo told a story about the Avalokiteshvara statue in the Tsuglagkhang. He mentioned having a dream of circumambulating a particular self-arisen image of Avalokiteshvara.

The statue called him close and he hugged it and heard it recite a verse about keeping up joyful effort. He reported that the statue in the dream was destroyed during the Cultural Revolution, but some parts were brought to him in exile.

They were placed inside the present 1000 armed, 1000 eyed image that stands in the temple today. His Holiness said: "When it was constructed, this statue was made in such a way that we will eventually be able to dismantle it and take it back with us to Tibet. And you should all join me when that time comes."