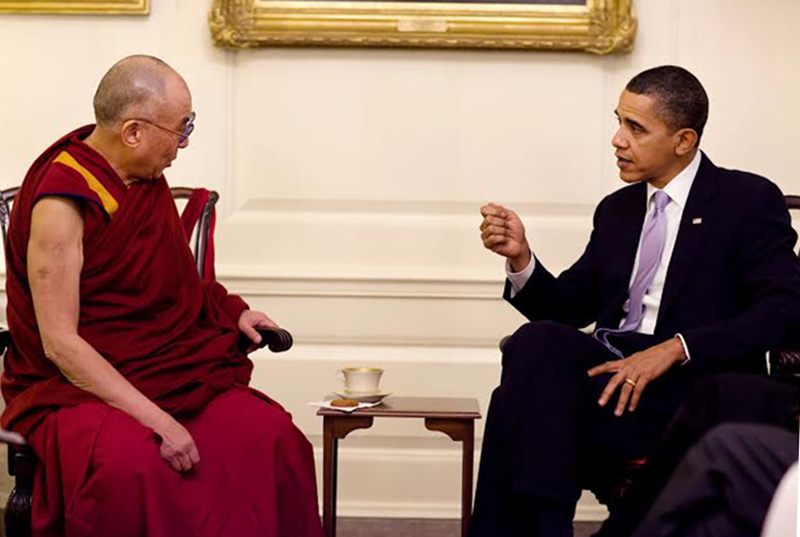 Dharamshala — The White House has announced that US President Barack Obama will meet with His Holiness the Dalai Lama on 15 June, despite China cautioning him not to.

While there is no information on what the pair will discuss, the meeting is sure to bring international attention to the Tibetan struggle.

With both the Tibetan spiritual leader and Taiwan's new president set to visit the United States, Chinese Foreign Ministry spokesman Lu Kang said that the country should avoid breaking its promise to support China's "one China policy".

"We demand the US government earnestly stands by its promises, conscientiously handle the relevant issue in accordance with the one China principle and not give any space to any individual or behavior which tries to create two Chinas, one China one Taiwan, or to split China," he said during a news briefing on 14 June.

Under the 'One China policy' Beijing is insistent that foreign governments must recognise both Taiwan and Tibet as part of China. Lu added that His Holiness the Dalai Lama, "often puts up the facade of religion to peddle internationally his political position of splitting China. We demand no country or government give him any space for such activities and should certainly not do anything the 1.3 billion people of China would resolutely oppose."

The meeting will be the fourth time that President Obama has defied China's demands over meeting the Tibetan spiritual leader. When the pair met in 2014 a spokeswoman for China's foreign ministry called the meeting, "a gross interference in China's domestic politics" and "a severe violation of the principles of international relations." Despite this, Obama vowed to give strong support for Tibetans' human rights.

The meeting is sure to add more tension to the already strained relations between America and China. Both countries have exchanged strong criticisms of each other since the dispute over the South China Sea. Last month Chinese State media accused the US of being an "active provoker" of Tibetan independence.

Meanwhile, a report published at the end of 2015 by the US government's Congressional Executive Commission on China said: "Human rights and rule of law have suffered a devastating blow since President Xi Jinping came to power. By nearly every possible measure, China today is more repressive and more brutal."