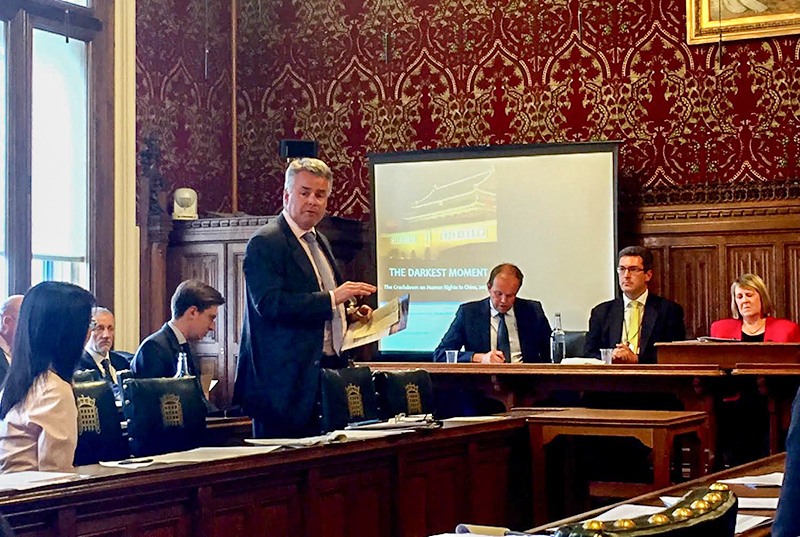 London — The UK government's Human Rights Commission has publicly released a report on human rights abuses in China since 2013, with one member of parliament describing the situation in Tibet as "deeply troubling" and "never been worse".

The launch of the comprehensive report titled The Darkest Moment took place on 28 June at the Houses of Parliament. Tim Loughton, a member of parliament and chair of the All Parliamentary Group for Tibet said he was pleased that Tibet is referenced throughout the report and the issues in the region have an effect not just Tibetans but on the world.

Loughton went on to describe a number of human rights violations including the suspicious deaths of political prisoners, the gradual elimination of Tibetan language and culture, environmental damage, and the destruction of UNESCO World Heritage sites. He also made strong and frank statements on the influence the Chinese government has on Westminster and the international community. "People should not underestimate the tentacles that China extends throughout the world," he said.

The section of the report that examines China's oppressive policies toward Tibet took evidence from the Tibet Post International, Tibet Society and Free Tibet.

"Every aspect of Tibetan life is under siege and Tibetans have even fewer civil and political rights than Chinese people also ruled by the Communist Party," wrote Yeshe Choesang, editor of Tibet Post International in his submission. "The regime enforces its control over every aspect through the threat and use of arbitrary punishments, at times including severe violence."

Meanwhile Tibet Society highlighted the plight of political prisoners in their submission, stating that Tibetans charged with political crimes are often tried in secret without independent legal representation. Much of the evidence in these cases is extracted through torture.

The report goes on to say that it is important to note that observations that might show there has been a reduction in the number of the most shocking abuses since 2013, such as in the use of lethal force against protestors, should not be regarded as a sign of improvement.

"This does not indicate a softening of China's approach in Tibet or of greater acceptance of Chinese rule by Tibetans," Free Tibet wrote. "Instead it reflects China's current effectiveness in implementing policies that have so restricted Tibetans' ability to express opposition to its rule in both private and public spheres that the need to systematically employ violence arises more rarely."

The report was written in order to detail the significant deterioration of human rights in China since 2013 and along with highlighting serious concerns for Tibet, it is also highly critical of issues such as the treatment of human rights lawyers, the use of torture, the detention of Hong Kong booksellers, and the deteriorating situation in Hong Kong.

It concludes that the period between 2013 and 2016 is the worst in China's human rights situation since the Tiananmen Square massacre in 1989. And goes on to criticise the UK government's relationship with China, which in recent years has seen government ministers regularly turn a blind eye to human rights abuses due to their fear of damaging the economic relationship between the two countries.

The former Governor of Hong Kong, Lord Patten also spoke at the launch and said that the fear of speaking out is an attitude that must be eliminated and the UK government must be willing to "raise these issues without fear of failure or that we are commercially shooting ourselves in the foot, because we are not".

He continued that while many European countries are too much like the UK in their attitude towards human rights dialogue, Germany's Chancellor Angela Merkel is an example of a leader who has been willing to consistently speak out against China's human rights record without any detrimental effect on their economic relationship. To illustrate the importance of this, he said that during the days of the Soviet Union dissidents who were detained regularly said their conditions improved when western countries spoke up and in China the same thing has been observed.

Regarding the UK's relationship with China, the report states: "Given the overwhelming evidence of a very grave deterioration in the human rights situation over the past three years, the Conservative Party Human Rights Commission is deeply concerned about the UK Government's decision to develop a friendship with the government of the People's Republic of China, without this being an appropriately critical friendship, particularly at this juncture and especially in the manner in which the relationship has been presented, described and calibrated.

"While we recognise the strategic and economic significance of China, we do not believe that it is in anyone's interests for the United Kingdom Government to be almost silent, publicly, on human rights, in light of such a grave deterioration."