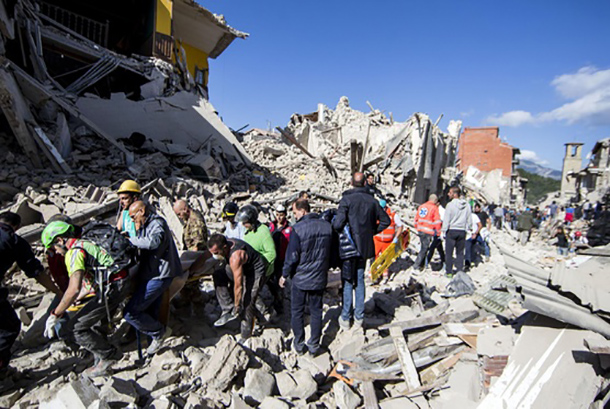 Dharamsala, India — The spiritual leader of Tibet, His Holiness the Dalai Lama has expressed sadness over the loss of life and destruction to property brought about by earthquakes in Italy, a country in Southern Europe.

In a letter to the Prime Minister of Italy, Matteo Renzi, His Holiness the Dalai Lama expressed his sadness at hearing reports of the devastating earthquake that struck Central Italy with loss of many lives and injuries to many people as well as widespread damage to property.

"His Holiness offered his condolences to the Prime Minister and to those that lost members of their families, friends and their homes in the tragedy," said an official post on Friday (August 26), citing His Holiness the Dalai Lama.

"As a token of solidarity with the people of Italy, His Holiness asked the Dalai Lama Trust to make a donation towards rescue and relief efforts." it added.

Following the massive devastation and loss of valuable lives in Italy as a result of the massive quake in the country, the Tibetan Parliament in-Exile (TPiE) also has expressed heartfelt sorrow and grief.

In a condolence letter addressed to Mr Sergio Mattarella, President of Italy, Speaker Khenpo Sonam Tenphel of the TPiE expressed his profound condolences to the victims of the devastating earthquake.

"On behalf of all the Tibetans in and outside Tibet, the Tibetan Parliament-in-Exile express our condolence to all the victims of the recent earthquake in Central Italy that has taken so many lives," Tibetan Speaker said.

"The 5th World Parliamentarian Convention on Tibet was held at Rome, Italy in 2009 with the support and cooperation of Italian parliament and its people. We are thankful of Italy's ever strong support for the Tibetan Issue. In such period of hardship, our solidarity is with you and your people," he said.

"We pray for the departed souls and for the victims & their families to overcome this disastrous challenge to get back to peaceful lives soon," he added.

A strong earthquake struck a mountainous stretch of central Italy early Wednesday (August 24), killing at least 241 people, trapping scores under debris and setting off tremors that awakened residents in Rome, nearly 100 miles to the southwest.

The earthquake, which had a preliminary magnitude of 6.2, struck at 3:36 a.m., about 6.5 miles southeast of the town of Norcia in the Umbria region, followed by about 200 aftershocks over the next several hours, including a 5.5-magnitude tremor at 4:33 a.m.

The authorities said the quake was comparable in intensity to one in 2009 in the Abruzzo region of central Italy that killed more than 300 people.

According to the US geological survey, it was the largest earthquake in Italy since April 2009, when a 6.3-magnitude earthquake hit L'Aquila, killing at least 295 people and injuring more than 1000.