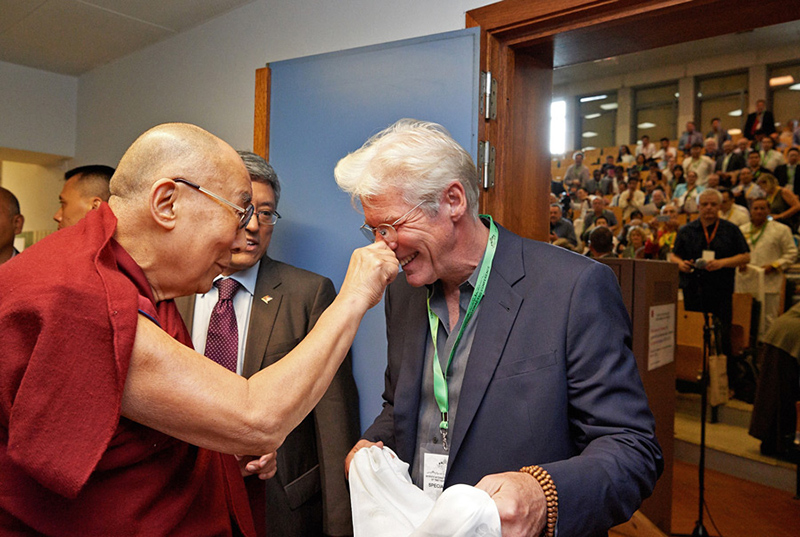 Brussels — The International Conference of Tibet Support groups commenced their 7th meeting this week with their opening ceremony, graced by His Holiness the Dalai Lama, on Thursday, March 8th. The three day conference, which is being held in Brussels, Belgium, includes more than 250 delegates from over 50 countries including 29 Chinese participants and 103 European participants.

His Holiness called on his friends and supporters of Tibet to take a broader view; to work to emulate his commitments to promote human happiness and encourage inter-religious harmony. In addition, he described himself as Tibetan and someone the Tibetan people trust. He described being interested in democracy since childhood and after failing to implement reforms in Tibet, working to establish it in exile.

The result was that with an elected leadership he felt able to semi-retire in 2001 and retire completely in 2011. What's more he willingly put an end to the Dalai Lamas taking a political role in the future. He said his retirement allowed him to work for the preservation of Tibetan culture and language. One of the ways of doing this has been engaging in dialogue with modern scientists. Many of them are interested in learning from Tibetan experience and understanding of the workings of the mind and emotions.

The first speaker of the event was Mr Thomas Mann, President of the Tibet Interest Group in the European Parliament, who welcomed the guests and His Holiness the Dalai Lama and went on to say that this 7th conference was an excellent opportunity to send a message to China regarding the 'deficit of human rights and unacceptable conditions' inside Tibet.

Several other speakers followed, all echoing a similar point, that it is time to change diplomacy with China, and it is time to seriously prioritize human rights.

Following this theme, Mr Henri Malosse, former President of the European Economic and Social Committee, stated that "we must never forget to mention human rights, civil rights and political freedom for everyone. When the EU is tough on small countries about these issues, why does it go easy on China? The Tibet issue is important because it affects the image we wish to reflect to the outside."

Cristian Preda, Vice Chair of the Human Rights sub-Committee and Member of the Foreign Affairs Committee of the European Parliament also asserted, "as repressive as a policy might be, it cannot kill the hope of an entire community... It is time to change our method and publicly condemn the policies of the Chinese government for the Tibetans and engage in a stronger public diplomacy on human rights issues."

An unplanned speaker was then introduced, and long time advocate for Tibetans and His Holiness the Dalai Lama's close friend, Richard Gere, continued by saying, "China is being viewed differently today than they were a year ago or a year ago before that. I think we can help reorder the world into the world we want it to be... We are all just human beings on this planet looking for happiness and we need to include the Chinese people in that. And my hope for this conference is that we can figure out how we can view the Chinese people as brothers and sisters in this enterprise."

The democratically elected Prime Minister of the Tibetan people, Sikyong Dr. Lobsang Sangay, spoke later, looking towards the future with hope for a peaceful conflict to the Tibetan issue. "I do believe that will happen, because this is Europe. This is the land where the Berlin wall came down, you are the veterans of the Berlin wall.... we have to make it happen that his Holiness's message and the message of peace prevail. The Berlin Wall came down in Europe, the wall of injustice in Tibet will also come down. With that hope and prayer I do believe that nonviolence will prevail over violence, compassion will prevail over war, justice will prevail over injustice, and His Holiness the Dalai Lama will return to Tibet."

The five decades old Tibetan struggle led by His Holiness the Dalai Lama generated intense and active interest for Tibet from people of all walks of life internationally since 1959. As a result, numerous Tibet Support Groups (TSGs) have been formed around the world. The International Conference was founded as a way to join efforts of the many groups found around the world to unite and collaborate.