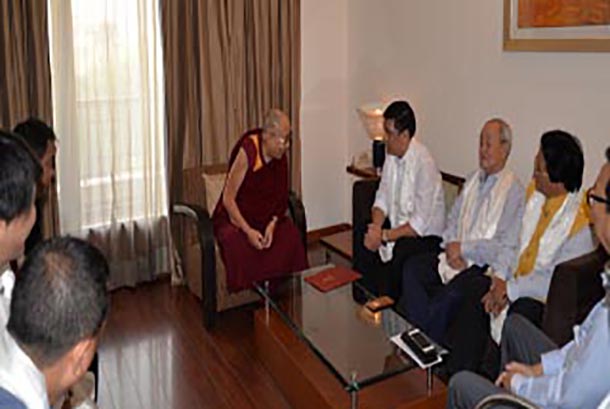 Dharamshala — His Holiness the Dalai Lama is free to travel to any part of India and China's objections about Arunachal Pradesh will not be accepted, the BJP spokesperson has said. "As far as whoever wants to visit any part of India, they can do so and these kinds of comments are uncalled for and they do not help in Bilateral relations in any way," BJP spokesperson Nalin Kohli told ANI in New Delhi.

China on Friday warned India that bilateral ties may suffer "damage" if it allows the Tibetan spiritual leader to visit Arunachal Pradesh, which Beijing claims is part of southern Tibet. Beijing routinely objects to visits by His Holiness the Dalai Lama and foreign leaders to the Indian state.

The border dispute covers the 3,488-km long Line of Actual Control (LAC). According to media reports, India asserts that the dispute covered Aksai Chin area, which was occupied by China during 1962 war.

China also objected on October 24 to US ambassador Richard Verma's visit to Arunachal Pradesh, saying any interference by Washington in the Sino-India boundary dispute will make it "more complicated" and "disturb" hard-won peace at the border.

However, New Delhi curtly dismissed China's protest against US Ambassador's visit. "The US Ambassador visited Arunachal Pradesh, a state which is an integral part of the country to which he is accredited," External Affairs Ministry spokesperson Vikas Swarup told the media.

His Holiness the Dalai Lama has confirmed his visit to Arunachal Pradesh in the second week of March next year," said recently elected AP Chief Minister Pema Khandu, who led a delegation to Dharamshala recently and expressed their gratitude to the Tibetan leader.

"We are eagerly waiting for the cherished moments of your holy presence in Arunachal Pradesh". Khandu conveyed the prayers of the people of Arunachal for His Holiness's long years of cheerful health and extraordinary wisdom," Khandu continued.