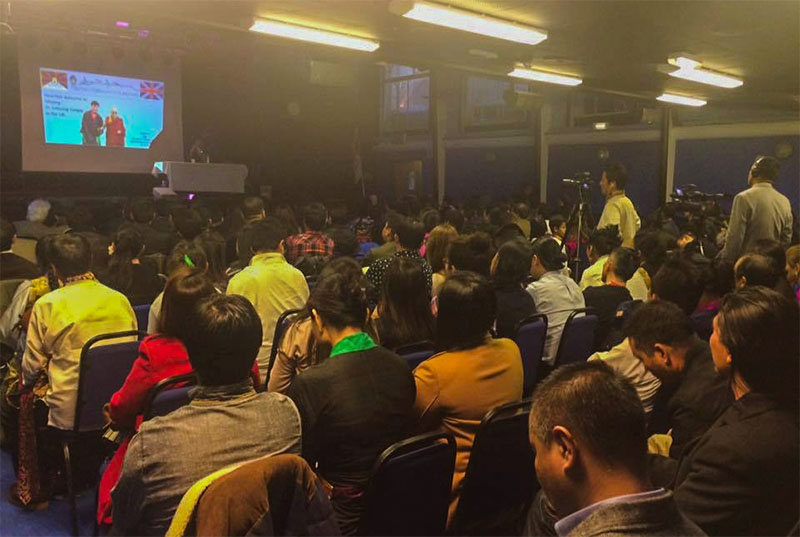 London — "In the course of next fifty years, China's political and civil society will definitely change and we can gain our basic freedom," Sikyong Dr Lobsang Sangay said while addressing Tibetan community in London, the capital city of the United Kingdom.

The democratically elected leader of the Tibetan people, Sikyong Dr Lobsang Sangay gave a public address to the local Tibetan community in Britain on October 30th during his visit to the United Kingdom.

The public address, held at the University of London Union, was attended by former members of Central Tibetan Administration, Representatives of local Tibetan associations and members of the Tibetan community.

Addressing the large gathering of Tibetans, Sikyong thanked the local teachers of the London School of Tibetan Language and Culture for their invaluable contribution towards preserving Tibetan language, cultures, and traditions, even in the face of adversity.

"The sustenance of Tibetan movement measures the success of our movement. The Kashag's five-fifty strategy calls for a renewed effort in our struggle to seek genuine autonomy in the next five years while strategizing to strengthen and sustain the Tibetan movement over the next fifty years," Sikyong said, adding that the Middle Way Policy proposed by His Holiness the Dalai Lama has gained huge respect, support and admiration of world leaders including President Barack Obama.

"The five-year strategy seeks meaningful dialogue with China to resolve the Tibetan issue, based on the Middle Way Approach (MWA). However if that does not happen in these five years, CTA will continue to sustain and strengthen the Tibetan movement, as per the fifty-year strategy. In the course of next fifty years, China's political and civil society will definitely change and we can gain our basic freedom," Sikyong added.

Sikyong recalled the advice and instructions given by His Holiness during a special audience that was granted to members of the Kashag on October 28th. "During the audience, His Holiness stressed the importance of preserving Tibetan language and promoting the knowledge of Tibetan Buddhism among Tibetans, especially the laypeople and children."

Sikyong further informed the public about the initiatives and accomplishments of the seven major departments of CTA, including updates on preparation of the upcoming 34th Kalachakra, which is being organised by Central Tibetan Administration. "In terms of the preparation for the upcoming 34rd Kalachakra, the security of His Holiness the Dalai Lama and convenience of the devotees is of utmost importance. CTA will also be sponsoring destitute Tibetan children, families and infirm health Tibetans to attend the teachings at Bodh Gaya this year."

Following the talk, Sikyong visited London School of Tibetan Language and Culture and spoke to the young Tibetan children about the importance of learning and preserving one's language and culture. The school is run by Tibet House Trust, London, UK. There are 45 students and three volunteer teachers. A committee of parents handle the smooth functioning of school.

Sikyong's upcoming events of his UK trip also include public talks at the University of Westminster, Merton College and the Oxford Union.