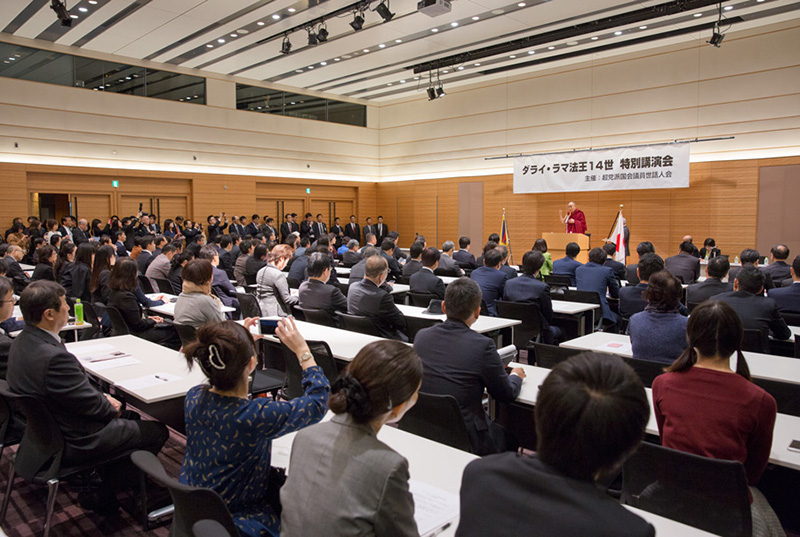 Tokyo, Japan — Politically we are not looking for independence, we want to stay within China. The Tibet issue is not just a political matter, His Holiness the Dalai Lama said while clarifying his position on the issue.

His Holiness the Dalai Lama visited the Japanese Parliament on 16 November and interacted with 229 parliamentarians from different political parties on the theme “Tibet and Japan” in the global world.

On his arrival at the House of Representatives Congress Hall His Holiness was greeted with thunderous applause from over 200 parliamentarians and policy makers present at the meeting.

His Holiness praised Japan as the most industrialised democratic country in Asia with very rich traditions of Shintoism and Buddhism. He expressed respect for the Shinto tradition of loving and respecting all forms of nature.

“Shintoism carries respect for all forms of life. Ultimately, we are part of nature. So respect for nature is very essential.” Shinto is the indigenous religion of Japan and the Japanese people. It is defined as an action-centric religion, focused on ritual practices to be carried out diligently, to establish a connection between present-day Japan and its ancient past. Shinto is the largest religion in Japan, practiced by nearly 80% of the population.

Clarifying his position on the Tibetan issue, His Holiness said, “Politically we are not looking for independence. For economic and other reasons, we want to stay within China. But the Tibet issue is not just a political matter, it is the preservation of one of the world’s ancient cultures which is relevant to today’s world. So it is worthwhile to preserve it. The Chinese government has the responsibility to preserve rather than destroy it.”

His Holiness criticised the communist hardliners at the helm in China for attempting to censor the flow of information to the public. “1.3 billion Chinese people have every right to know the reality. Once Chinese people know the reality, they have the ability to judge what’s right and wrong. So censorship is immoral… Freedom of speech and a democratic system, that’s the only way,” he argued.

“The world belongs to seven billion human beings and Japan belongs to Japanese people. Each country belongs to the people. Government from time to time change, people always remain there.”

His Holiness the Dalai Lama reiterated that as one of seven billion human beings on this planet, he is committed to creating a peaceful and happy 21st century. Secondly, as a Buddhist monk, he is fully committed to promoting harmony between different religious traditions, as they all have the same message of compassion and love. Thirdly, as a Tibetan he is fully committed to the preservation of Tibet’s environment, rich heritage of knowledge and culture.

In response to a series of question, His Holiness expressed his genuine admiration and respect for the centuries-old culture and traditions of the Chinese people. “The Chinese people we really admire, we really respect. They have a 5000 year-old culture, they are a very cultured and hard-working people.”

Speaking to members of the new Parliamentary Support Group for Tibet in the Japanese Parliament, His Holiness said that their support for the Tibetan issue represents a universal commitment to justice and truth.

A Parliamentary support group for Tibet has been set up in the Japanese Parliament, which pledged to reinvigorate its support to the issue of Tibet.

The next day His Holiness met with a group of Tibetans who had gathered in long rows on the floor to greet him in Yokohama, holding up pictures of the Buddha, wiping away tears, joining their hands in prayer as he spoke, he stressed how much of Buddhist philosophy, so vast and so profound, is preserved only in the Tibetan language. Sanskrit, after all, is dead, and neither Chinese nor Hindi contain these texts.

So the Tibetan language is indispensable for all serious Buddhists, especially in the Nalanda tradition. And Buddhist philosophy, as well as Buddhist psychology, are very much in demand in today’s world. So a living Tibetan is similarly essential for all of the globe. Buddhism does not suggest that redemption comes from a Creator and devotion to that Creator; it emphasizes “training of the mind,” and the way in which we are all makers of our own destiny. So he urged the Tibetans to sustain their spirit, their language and their philosophy.