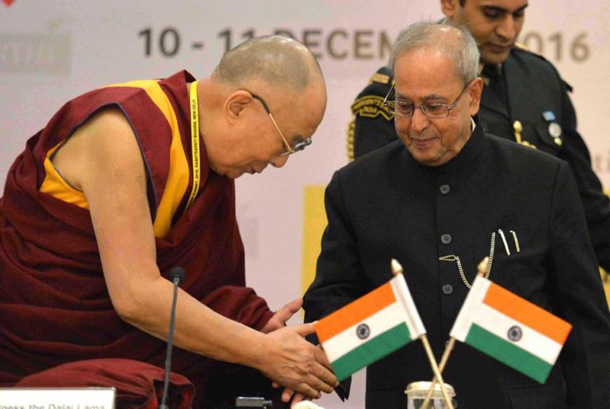 New Delhi — The spiritual leader of Tibet, His Holiness the Dalai Lama and President of India, Mr Pranab Mukherjee graced the inaugural session of the first ever Laureates and Leaders for Children Summit held on Saturday at the Rashtrapati Bhavan (Presidential Palace) in New Delhi, the capital of India.

Organised by Nobel laureate and child rights activist Kailash Satyarthi, the summit brought together around 25 laureates and leaders.

Reminding the society about its moral obligation towards development and the security of children, President of India Pranab Mukherjee said programmes and actions for children have to take centre-stage in national policy-making.

'The disparities in education, health and poverty indicators will have to be eliminated and pointed out that education was the strongest weapon in the fight against inequality,' Mukherjee said, adding that problems of varying degrees afflict children - from bullying at school to cases of sexual harassment, child marriage and trafficking.

Addressing the"Laureates and Leaders for Children Summit" at the Rashtrapati Bhavan in the Indian capital, His Holiness Dalai Lama of Tibet called for making the 21st century a century of peace and said today's education was "materialistic". "The world is facing a lot of troubles, a lot of issues most of which are man-made. Basic human nature is of compassion, so there is hope," His Holiness added.

Nobel Peace Laureate Kailash Satyarthi envisioned the Summit to harness the collective intellectual, moral and political will of the Laureates and Leaders for the benefit of the world's children. The summit will deliberate on issues such as child trafficking and child slavery as the inaugural ceremony leaders called for urgent action for the world to allow children to enjoy their childhood years unhindered.

"According to UNICEF, 80 percent of child deaths occur in South Asia and Sub-Saharan Africa. In regions marred by armed conflicts, violence and insurgencies, children are the most affected. There are many children amongst refugees who face an uncertain future.