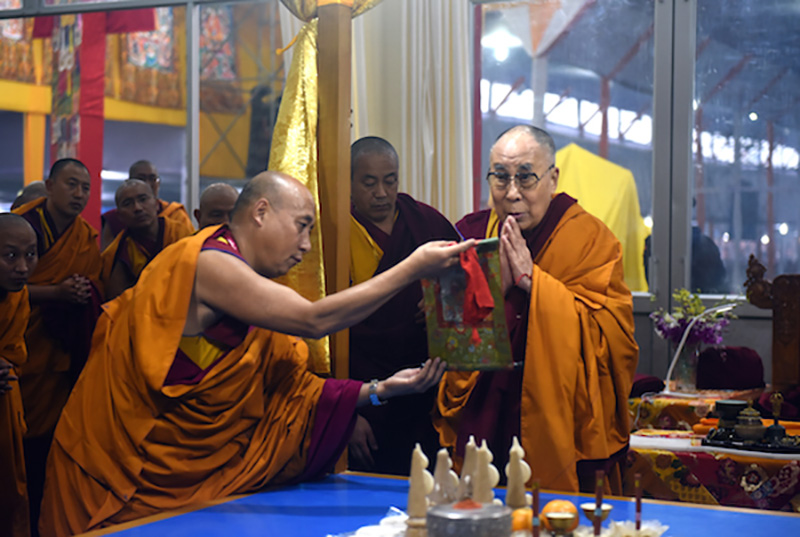 Bodh Gaya — The Tibetan spiritual leader, His Holiness the Dalai Lama, began the 13-day Kalachakra Initiation in the heart of the holiest Buddhist pilgrimage, Bodh Gaya in the early morning of January 2nd. This also marks the 62nd year since His Holiness first bestowed the initiation at Norbulingka, Lhasa in April 1954.

The Kalachakra teaching ground was jam-packed by more than 100,000 devotees who have traveled from over 17 different countries including China, Mongolia, US, Australia and many others across the world.

As His Holiness ascended on the throne, the offering of prayers and the preliminary service of ‘Guiding the Disciples Ceremony’ began with recitations of verses in praise of the Buddha, the Heart Sutra and the mantra of Kalachakra deity. ‘The Guiding the Disciples Ceremony’ is observed by the guru, before giving a discourse to his disciples, to ensure smooth transition of the teachings.

Inaugurating the ‘Guiding the Disciples Ceremony,’ His Holiness said: “Bodh Gaya is an extraordinarily sacred place of over 2000 years old. It is the seat of Shakyamuni’s enlightenment and therefore is supremely holy place for all the Buddhists around the world. Some of the great Nalanda and Tibetan masters have accomplished their practices here. On account of this place being so sacred, we are doing the 34th Kalachakra initiation here for the following two weeks.”

Enlightening his disciples on motivation for drawing blessing from the Kalachakra teachings, His Holiness said: “Many of you have come here, leaving the comforts of your home, for spiritual practice and dharma. But regarding spirituality, you need to practice in order to draw blessings of the Kalachakra. Through mere prayers, you can’t draw this kind of inspiration and therefore you must strive for transformation of your mind and to the best your ability, try to integrate the teachings and train your mind.”

“The purpose of receiving the Kalachakra initiation is to make transformation within oneself. Therefore, having come here for the Kalachakra, your goal should be that you will become better in your spiritual practice. If you can do that, the purpose of coming here is served.” His Holiness advised his devotees.

Regarding the transformation of mind, it cannot happen by receiving teaching in few days. You are sowing the seed for enlightenment, he said.

For the next two days, His Holiness will conduct the ritual ceremony to consecrate the venue and therefore, told the devotees to use the time to make pilgrimage at holy places in and around Bodh Gaya.

On 5 January, His Holiness will begin the “Teaching on Shantideva’s A Guide to the Bodhisattva’s Way of Life (Chodjug) and Kamalashila’s The Middling States of Meditation (Gomrim Barpa).