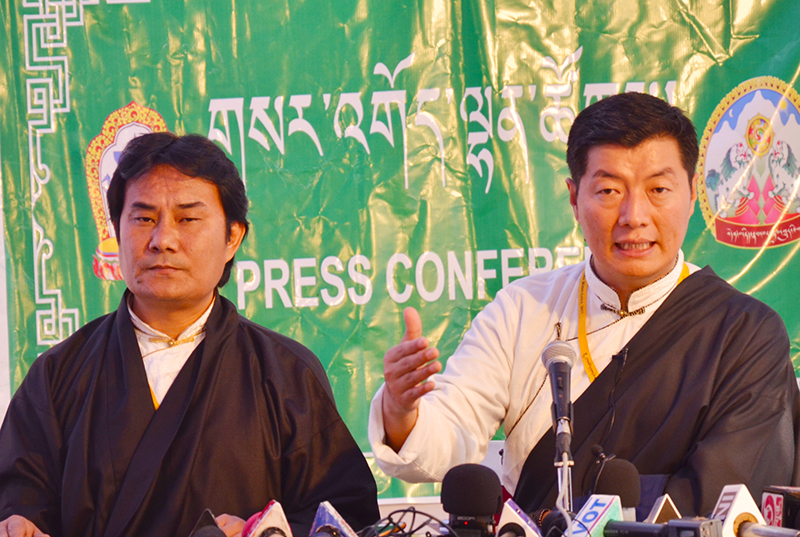 Dharamshala — The Central Tibetan Administration strongly condemns the barring of thousands of Tibetan pilgrims from taking part in the the 13-day Kalachakra teachings now taking place in Bodh Gaya, one of the four holiest places for the Buddhists around the world.

"The state of religious freedom in Tibet is acute," Tibetan PM Dr Lobsang Sangay Sunday told reporters at a press conference in Bodh Gaya after the Chinese government's refusal to allegations of barring thousands of Tibetans to attend Kalachakra teachings by His Holiness the Dalai Lama and Sikyong also criticised Chinese government's imposition of ban on Tibetans intending to take pilgrimage in India.

"Thousands of pilgrims have come from Tibet purely to take part in a spiritual event. They have attained legal permit to travel here. The Chinese government threatening Tibetan pilgrims to return immediately under such severe pressure is simply unacceptable. It is in clear violation of International human rights norms," said Sikyong.

The Chinese government has charged severe travel restrictions on Tibetans in Tibet in a bid to block their travel to India to attend the 34th Kalachakra Initiation–a prominent Buddhist ceremony led by the most revered Tibetan spiritual leader His Holiness the Dalai Lama at Bodh Gaya.

Thousands of pilgrims, who have already arrived in Nepal and India have been summoned back to Tibet under threats of severe punishment. Yesterday Xu Zhitao, deputy director of the bureau of the Tibet question at the United Front Work Department of the Communist Party of China Central Committee  refuted reports of pressurising Tibetan pilgrims against attending the Kalachakra and called the Buddhist teaching a "political tool".

The Tibetan political leader argued that the refutation is untrue. "I have personally met hundreds of them. After many years of hard work, they have been able to visit India and Nepal and for the simple purpose to visit the place of Buddha's enlightenment and seek spiritual blessings."

"Thousands of them have now scrambled and returned back to Tibet because the authorities had threatened the family members of cutting subsidies, jobs and severe consequence if they don't return between 1 – 15 January."

Protesting discriminatory restraints faced by Tibetans applying for passports in Tibet, he said, "It can be categorically stated that 90 per cent of Tibetans in Tibet are not issued passports while large majority of Chinese are issued passports and are traveling all over the world." If Tibetans are "the masters of their regions" as offered in Chinese White Paper on Tibet, they should be allowed to travel free, Sikyong urged.

While regretting the unfortunate developments, Sikyong commented that the spiritual transmission of the Kalachakra cannot be restricted by physical boundaries and that its blessings would be bestowed upon Tibetans living inside Tibet and those across the world. His Holiness the Dalai Lama, on several occasions, has reassured the Tibetans, returning mid-pilgrimage under Chinese pressure, not to get disheartened and pray on the days of the main initiation to receive the the Kalachakra empowerment in spirit.

Remarking on the auspicious and smooth initiation of the Kalachakra teachings at the holy town of Bodh Gaya, Sikyong expressed profound gratitude to the people and government of Bihar for their kind hospitality and support in making the event prosperous. The Tibetan political leader also offered special thanks to Chief Minister Shri Nitish Kumar, DM Shri Kumar Ravi, SSP Garima Malik.

Thousands of pilgrims from Tibet, mostly from Kham and Amdo provinces who had hoped to attend have been forced to return home, though, while others have been blocked from leaving Tibet. The 34th Kalachakra initiation is being underway at Bodh Gaya with His Holiness the Dalai Lama presiding over the religious rituals. More than 100,000 of pilgrims people from 85 are in attendance. The organisers also say more pilgrims still arriving.

"The government by no means threatened them to return, although the government does not encourage them to attend the ritual" and the ritual, organised by the Tibetan "government-in-exile certainly involves politics", a Chinese state-run media the Global Times reported, citing two officials, including Zhu Weiqun, known for his deadly hardline stance on Tibet.

Tibet was occupied by Communist China, beginning in 1949. Since that time, over 1.2 million out of 6 million Tibetans have been killed in what historians consider a genocide under the dictator Mao Zedong regime and over 6000 educational institutions and monasteries have been systematically destroyed— the acts of murder, rape and arbitrary imprisonment, torture and cruel, inhuman and degrading treatment were inflicted on the Tibetans inside Tibet, China calls a "peaceful liberation"?