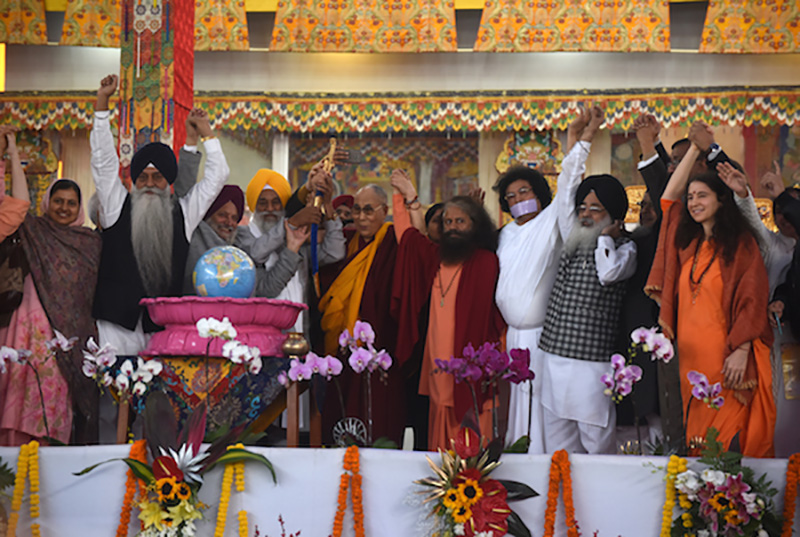 Bodh Gaya — During the preliminary days of the Kalachakra Initiation, His Holiness the Dalai Lama participated in an interfaith prayer for world peace, joined by representatives of major world religious traditions in Bodh Gaya.

Inaugurating the ceremony, leaders of major religious traditions including Hindu, Islam, Jain and Sikh joined together in prayers for world peace, promotion of religious harmony and promotion of common message of love and compassion.

His Holiness the Dalai Lama exchanged an emotional greeting with the representatives and expressed his delight at being able to gather the major religious leaders and share their messages of love and brotherhood at the holiest Buddhist pilgrimage in the world.

“In front today’s gathering of respected gurus of various faith I vow to carry on my pledge of religious harmony till my last breath. I know that you have worked hard till now and I hope you will continue to do so.

“For 7 billion human beings, there are different mental dispositions and mindsets. It is impossible to have all the 7 billion people follow one religion and be able to benefit from it as effectively.”

He further emphasised that even within one tradition as Buddhism, there are different vehicles and philosophical tenets to benefit different followers. “Similarly, we are all following the same message but practising different religions inorder to reap effective benefits.”

Offering India as a model of religious harmony and brotherhood, His Holiness said, “I think religious harmony in India is truly wonderful. Although there are occasional problems created by mischievous people, India is one among the 200 countries in the world where all different religions coexist harmoniously since thousands of years.”

In order to mark the auspicious event, His Holiness and the religious leaders participated in symbolic ceremonies such as tree-planting and pouring water over a model of globe which symbolises cleansing and rejuvenating the earth.

His Holiness applauded the spirit and contribution of the representatives in their respective communities and encouraged them to continue the efforts.

A Jain representative, in his remarks, expressed deep reverence and admiration for His Holiness the Dalai Lama and his leadership in promoting religious harmony. “His Holiness the 14th Dalai Lama is supreme leader among the global interfaith congregation. He has taught the world the teaching of all religions are to bind people together; not break them. Due to the blessings of His Holiness, this kind of conference are going on all over the world,” he said.

His Holiness then resumed his teachings on Shantideva’s A Guide to the Bodhisatva’s Way of Life (Tib: Chodjug) and Kamalashila’s The Middling Stages of Meditation (Tib: Gomrim Barpa).