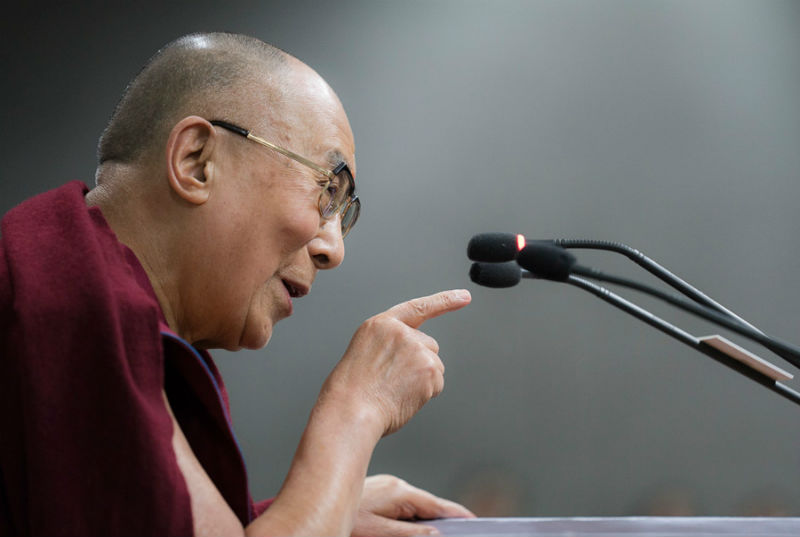 New Delhi — Expressing hope that US President Donald Trump and Russian President Vladimir Putin will work together for global peace, the spiritual leader of Tibet, His Holiness the Dalai Lama said the world needs more leaders with compassion, while addressing the FICCI Ladies Organisation in New Delhi.

He said the world is headed towards peace and non-violence as countries including Japan and European Union are working towards peace and nuclear disarmament, and hopes Trump and Putin will come closer and work towards creating global peace.
Stressing over the need for peace to prevail across the globe, he called for dialogues with a sense of concern at all levels for solving problems of violence in the world, further reiterating the importance of dialogue over violence and how the leaders across the globe must work towards making this a century of dialogue and not one of violence.

His Holiness the Dalai Lama, who has met former US presidents, including four meetings with Barack Obama, had said in Mongolia in November that he had 'no worries' about Trump's election as US president and looked forward to meeting him after he took office. His exchanges and dialogues have not been received too well by Beijing and Dalai Lama has also been allegedly accused of trying to split Tibet from China in the past.

Refuting all accusations hurled at him, His Holiness the Dalai Lama's firm commitment to a resolution that has Tibet as a part of the People's Republic of China, the need to unify all Tibetan people into one administrative entity, and the importance of granting genuine autonomy to the Tibetan people within the framework of China's Constitution. But with an emphasis on stronger protection for its traditional Buddhist culture and more active political participation by Tibetan people.

"We must take steps wherever necessary to improve educational opportunities with emphasis on secularism and hygiene for all, especially women, so everyone lives a healthy life," the Dalai Lama said while addressing the FICCI Ladies Organisation (FLO) in New Delhi.

The Nobel Peace Prize Laureate called for the need to develop compassion and warmheartedness to survive in the exceedingly inter-dependent world.

"We should all develop inner value of compassion as all religions in common teach us cultivating love and compassion. Although they advocate different philosophical views, purpose of every religion is to ultimately support the practice of love and compassion.", he said, adding that there is a dire need to focus on oneness and equality of all human beings, alleviating completely the ideology that promotes 'us' and 'them' which leads to nothing but conflict.