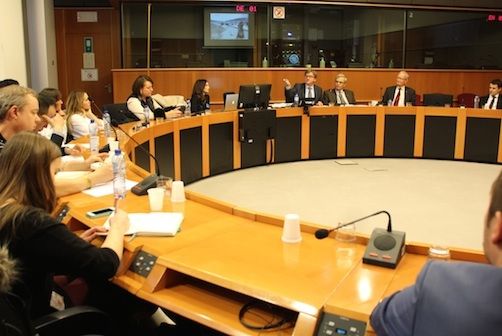 The main item on the agenda was a follow-up on the Larung Gar Urgency Resolution adopted by the European Parliament in December.

Mr. Mann greeted the first TIG meeting of the year 2017 and said that a large majority of MEPs had voted in favor of the resolution, which sent a clear signal to China.

Mr. T?kés, who was among the initiators of the resolution, said that the topic is very close to his heart, and that friends of Tibet should continue to fight against the totalitarian regime in China.

Secretary Thutop Namgyal and Under Secretary Tenzin Rabga from Bureau du Tibet, Brussels attended the meeting. Mr. Thutop Namgyal expressed his gratitude to the MEPs for their support in the recent resolution. He gave a brief note on Representative Tashi Phuntsok’s weeklong tour to France where he visited French National Assembly and urged the French lawmakers to adopt a similar resolution in the French parliament.

The Tibet Interest Group was initiated in 1989 and have been a strong voice for the interests of the Tibetan people in attempts to create a constructive dialogue between the Tibetan Government in Exile and the People’s Republic of China.

TIG has been responsible for all resolutions of the European Parliament concerning the human rights situation in Tibet.