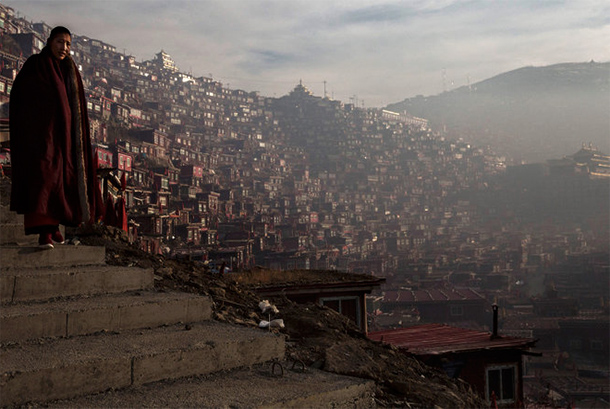 Dharamshala — A new report from the International Campaign for Tibet details how “demolitions and expulsions at Larung Gar and Yachen Gar in the past six months are part of an unfolding political strategy involving more aggressive measures in order to curb and manage the growing influence and number of monks and nuns,” while simultaneously “using this very interest in Tibetan Buddhism to attract domestic tourists.”

The report, titled ‘Shadow of Dust Across the Sun,’ released on March 13th is informed exclusively by first hand sources and eyewitness accounts, and while original reports from the Chinese authorities indicated that destruction of the religious institution was due to overcrowding and space concerns, the new ICT report suggests otherwise.

Larung Gar and Yachen Gar have achieved widespread popularity among both Tibetans and Chinese as non-political hubs dedicated to monastic education, academic learning and Buddhist ethics since the mid-1980s when they were founded. Video footage of nuns weeping as they are expelled in convoys of buses while their wooden huts are demolished has drawn global attention to the extent of a crackdown at the world-famous Buddhist institute of Larung Gar in eastern Tibet.

According to the ICT report, “information from the area [suggests] the buildings under construction are likely to be part of a push to develop the area with new guest-houses or facilities for temporary visitors rather than long-staying monastics as part of a broader official plan to re-shape and develop the area. According to various Tibetan sources, tourist attractions are likely to include Tibetan restaurants, souvenir stores, horse-riding centers, trekking, and organized visits to the now world-famous Larung Gar.”

“Major construction work in the vast valley at the foot of Larung Gar to build a new tourist village and other developments has revealed that tourism is now being used as a tool by the Chinese authorities to confront revivalist trends of Tibetan religious and cultural expression and contain monastic growth.

“Heightened security and surveillance at both Larung Gar and Yachen Gar and local sxdtowns, including new mobile police stations and intensified militarization in urban areas nearby are consistent with more systematic and intrusive measures across eastern Tibet since the wave of self-immolations began in Ngaba, Sichuan in 2009.

“Official plans for urbanization and tourism focused on presenting an official version of Tibetan religious culture and a ‘happy Kardze’, involving an emphasis on non-religious elements of Tibetan culture, aligned with longer-term strategies to contain dissent, ‘manage’ religious activities and ensure Party control across the prefecture.”

An educated Tibetan man in the Serthar area said that tourism is being used in Tibet to assist official efforts to restrict religious freedom: “Tibet is being turned into a huge tourist destination. Religious activities will be increasingly minimized and contained in monasteries. These will be limited in terms of demography and housing. This is the main objective of the Chinese government with regards to Buddhism, and we Tibetans have no power to influence any of these plans.”

In a rare step, six UN experts said publicly last month that they had made a joint submission to the PRC stating that the developments at the Buddhist institutes violate international human rights laws and “seem to be concerted attacks on tangible and intangible cultural heritage, which constitute serious violations of cultural rights of current and future generations."

Matteo Mecacci, President of the International Campaign for Tibet, said: “The new evidence presented in this report calls into question the entire basis of the demolition of homes and expulsion of nuns and monks, which have caused such distress. It cannot be possible for the Chinese authorities to claim there is overcrowding and not enough space for genuine religious practitioners given the extent of construction over a vast area in this remote valley. The UN statement reflects global alarm over the counter-productive razing of homes and expulsion of monks and nuns who have peacefully studied at these world famous religious institutes – which are so precious for Chinese as well as Tibetans.”