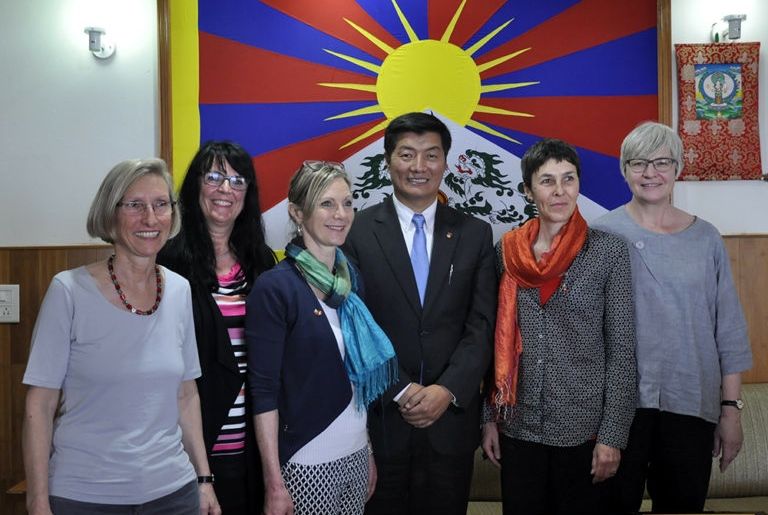 Dharamshala — Sikyong Dr Lobsang Sangay received a six-member delegation of Swiss parliamentarians at the Kashag secretariat in Dharamshala on March 29th, to discuss important issues on Tibet and the geopolitical concerns associated with the Tibet issue.

The Tibetan political leader urged the MPs to support China-Tibet dialogue based on CTA’s Middle Way Policy. He pointed that the Middle Way Policy calls for genuine autonomy for Tibetan people under the PRC, and does not contradict the One China Policy.

Sikyong recalled the remarks made by US Secretary of State Rex Tillerson on encouraging dialogue between Beijing and Representatives of Tibet’s ‘Government in Exile’ and/or the Dalai Lama. Tillerson had stressed, in connection with his Senate confirmation hearing, had said he will “encourage Beijing and the Governments of all nations to respect and preserve the distinct religious, linguistic, and cultural identity of the Tibetan people worldwide.”

He also called their attention on environmental issues such as depletion of Tibet’s ecology and its looming impacts on Asia and Europe.

In light of these ongoing environmental and human rights violation in Tibet under the Chinese government, Sikyong informed that Kashag has declared 2017 as ‘year of campaign’ to galvanise the global Tibetan movement to resolve the Tibet issue.

“CTA’s year of gratitude campaign in 2018, which will highlight Tibetan people’s immense gratitude towards governments around the world, particularly India for hosting His Holiness the Dalai Lama and the Tibetan community for the last sixty years.”

The Swiss parliamentary delegation expressed their wholehearted support for dialogue between Beijing and envoys of His Holiness the Dalai Lama for peaceful resolution of the Tibetan issue. They also expressed support for women empowerment initiatives led by the Kashag.