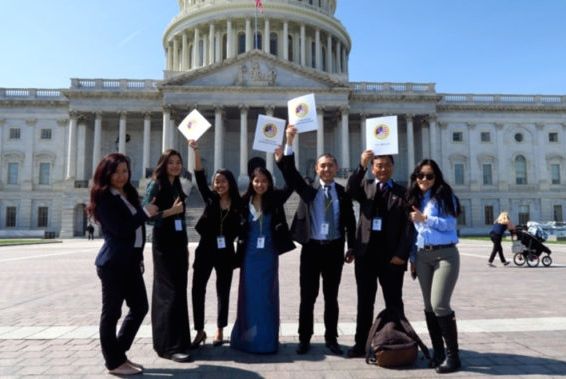 Dharamshala — “We’re here to speak for those who cannot,” said Chimi Youdon of Colorado. Howard Fass of Boston, MA, said “we have an amazing opportunity to reach out to our elected officials in America. We live in a free country and we can talk to our elected officials and voice our concerns.” “They listen,” said Marah Litchford of North Carolina.“You just have to talk loudly.”

Hundreds of Tibetan leaders and Tibet supporters from all over the United States, Europe, and Australia gathered in Washington DC, Brussels and Canberra to urge their governments and Parliaments to increase their support for Tibet and the Tibetan people for the official Tibet Lobby Day.

In Washington, over a hundred and thirty Tibetan-Americans and Tibet supporters met for the ninth annual Tibet Lobby Day, and asked Members of Congress to continue to support the aspirations of the Tibetan people, to continue funding of Tibet programs, advocate for the release of Tibetan political prisoners, promote access to Tibetan areas for US officials, journalists, citizens and to hold Chinese leaders accountable for their human rights violations in Tibet.

Tibetan advocates in Washington met with the offices of more than 250 US Members of Congress over the course of the two days program, from March 27th to 29th.

In addition to the in-person meetings on Capitol Hill, ICT members taking part in Virtual Lobby Day sent thousands of messages to their Members of Congress, covering 49 states and the District of Columbia. The International Campaign for Tibet coordinates Tibet Lobby Day in Washington in cooperation with Students for a Free Tibet and Tibetan Associations in the US.

In Brussels, a group of Tibetan activists from Austria, Germany, Italy and Poland participated in the Tibet Lobby Day organized in Brussels (Belgium), the capital of the European Union, between the 27th until the 29th March. The program was prepared jointly by ICT Europe offices in Amsterdam and Brussels and began with a briefing on EU human rights mechanisms and policies, EU-China relations, new developments inside Tibet, the role and responsibility of the CTA, and advocacy and communication techniques and exercises.

They had the opportunity to meet with some European deputies and their assistants who are known as long-time supporters of Tibet, either members of the Tibet Interest group, of the Delegation in charge of the relations with the People’s Republic of China, of the Foreign Affairs Committee and/or of the Sub-committee on Human Rights.

In Canberra, the Australian Tibet Council held the sixth Tibet Lobby Day in Australia. The Tibetan delegation was in Parliament House on 27 and 28 March. Over two days, they met with MPs and Senators from all parties and from across the country. The participants briefed elected representatives on the key issues facing the Tibetan people and asked them to be part of a global effort to increase pressure on China to improve the human rights situation in Tibet.

The delegates discussed China’s intensifying crackdown on the Tibetans’ freedom of religion, as demonstrated by the recent demolitions and expulsions of monks and nuns at Larung Gar Buddhist Institute, and pushed for a visit to Tibet by Australian parliamentarians.

“In stark contrast with the severe repression Tibetans inside Tibet face when they try to exercise their fundamental rights, Tibet Lobby Day sees Tibetans and their supporters around the world asking their elected officials to stand up for Tibet,” said Matteo Mecacci, President of the International Campaign for Tibet. “The Dalai Lama says that truth is the only weapon in the Tibetan struggle for freedom. Over the last few days hundreds of people have met with their members of Congress and Parliament to tell them the truth about the situation inside Tibet, and to ask for their help in improving it.”