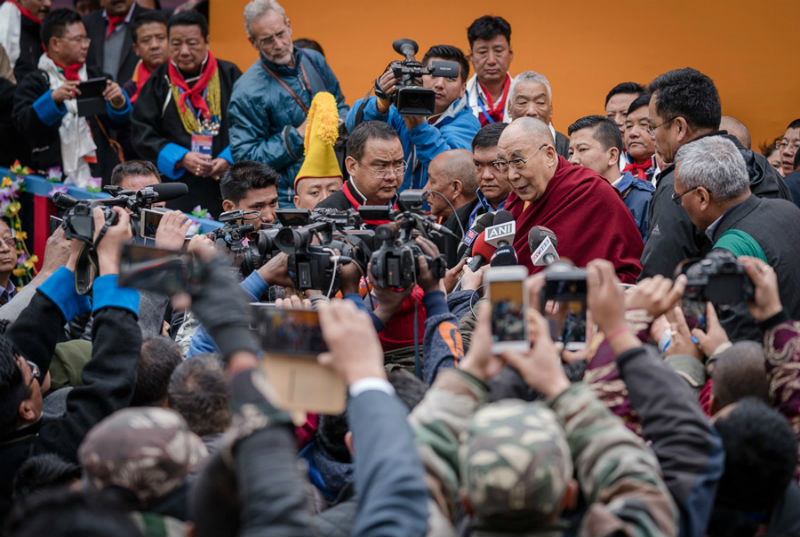 Bomdila, Arunachal Pradesh — Explaining Tibet is materialistically backward but spiritually highly advanced, His Holiness the 14th Dalai Lama said that people of Tibet is not seeking Tibet's independence but only "meaningful autonomy" from China.

The 81-year-old Nobel Peace Prize Laureate, who arrived here on Tuesday on his way to Tawang, said, "We are not seeking independence. We want China to give us meaningful autonomy. We want to remain with the People's Republic of China."

Speaking to reporters in the Indian State, the spiritual leader of Tibet said that "Tibet is materialistically backward but spiritually highly advanced. We want to develop materialistically by remaining with China and it should also feel the same way for mutual benefit."

His Holiness he Dalai Lama has praised the European Union for preserving national cultures while pursuing collective goals, suggesting it could be a model for Tibet within China. "I always admire the spirit of the European Union."

His Holiness also rejected China's claim that India was using him diplomatically to challenge the Communist country, and described himself as a messenger of ancient Indian thought and values.

"India has never used me against China. I am a messenger of the ancient Indian thought and I talk about ahimsa, peace, harmony and secular ethics wherever I go," he said talking to reporters here on the second day of his week-long visit to the remote northeastern state.

Calling for restraint, His Holiness the Dalai Lama said, "Please do not say 'angry Chinese'. There are many in China who love India. It's only some narrow-minded politicians who see India in a different way, just the way they see me as a demon. I am not a demon."

His Holiness spoke fondly of Arunachal Pradesh and said he had a special connection with the state as it served as his point of entry when he arrived in India in 1959. "I would like to thank the government of India. I have been in this country since 1959. India has taken great care of me. I am their longest staying guest. I am thankful to them.

"When I got freedom, when I first reached India, I entered through Arunanchal Pradesh. I have an emotional connect with the state. It is a special place for me."

From April 8 to 10, he will deliver discourses in Tawang. Owing to the rescheduled visit, he would not be able to go to Itanagar. "I am a Buddhist. The entire Himalayan range had been traditionally following Buddhist dharma and modern physics is based on Buddhist philosophy."

"Situation inside Tibet is tragic. The situation in the 21st century will be miserable if it continues like this. The world suffers from short sightedness which is not good. We shouldn't bully each other," His Holiness the Dalai Lama Thursday told reporters at Thuphung Dhargeling monastery in Dirang, Arunachal Pradesh.

"There is so much of poverty. Children not getting education. We need to work hard to take care of everyone. I am a half Buddhist monk and half scientist. I will spend my entire life in spreading happiness and love," His Holiness added.