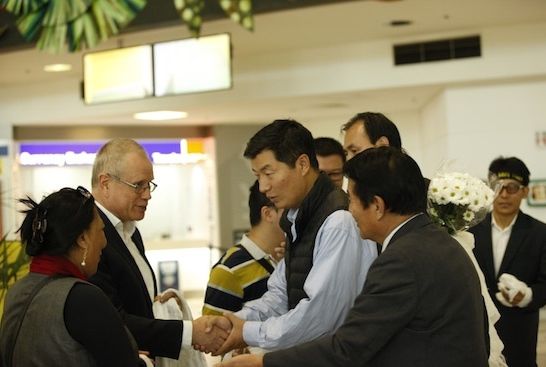 Dharamshala — The democratically elected political leader of Tibet, Sikyong Dr Lobsang Sangay is seeking support for Tibetans and the middle way approach during his visit to Australia and New Zealand this week, after arriving in Brisbane on April 28th.

This is the leader's first trip to both Australia and New Zealand. He was received by Representative Lhakpa Tshoko and Chinese Liaison Officer Kelsang Gyaltsen from the Tibet Information Office and members of the local Tibetan Community at the Brisbane International Airport.

Gracing the 9th Festival of Tibet as the Festival’s Chief Guest at Brisbane Powerhouse, Sikyong said, “Through this event, the rich and dynamic culture of the Tibetan civilization has been on display over the years in the form of cultural songs, exhibitions, talks, and workshops.”

“The Tibetan civilization is not a relic preserved in a museum. Rather, it is a living breathing civilization and culture, which deserves its own place in this living world,” he added.

"Events such as this festival sends a message to our brothers and sisters back in Tibet that we are doing our best to preserve our religion and culture, a message to His Holiness that he is the greatest scholar of Nalanda tradition and Champion of peace and non-violence. At the same time, we are sending a message to the leaders in Beijing that our culture & tradition are so rich that it must be preserved and not destroyed," he said, concluding the festival.

Addressing the gathering of Tibetan community, Sikyong touched upon various issues relating to Tibetan struggle including the importance of unity and preserving the rich Tibetan language and culture as advised by His Holiness the Dalai Lama.

Meeting with various media, Sikyong gave an interview to SBS National Broadcasters of Australia, in addition to appearing on "In Conversation with Paul Barclay," where he said, "there are good people in Australia who are supporting us, they are with us, and they are also sending a message to Beijing: Tibetans are here. We are with them. You might be more rich and more powerful but the truth will prevail. The resilient spirit of Tibetan people will prevail, because we are with you. That is the message to Beijing."

Arriving in New Zealand on April 30th, Sikyong was first interviewed by the New Zealand Herald.

“New Zealand got its freedom supported by others, and the values that it fought for, the basic values of democracy and human rights, are the values that we are fighting for. Now I am here to seek the support of the people of New Zealand to fight for the same basic rights for Tibet.

“The situation in Tibet is tragic, as we speak Larung Gar monastery is being destroyed,” he said. “From 12,000 monks and nuns, it will be reduced to 5000, many are forced to leave and made to sign a pledge never to return again.

"Three nuns have committed suicide because they have nowhere to go,” Sangay said. “Since 2011, 146 Tibetans have set themselves on fire because of the repressive policies of the Chinese Government. There is no religious freedom, no political freedom, and not even environmental rights.

“Many feel it is better to commit self-immolation and die, than suffer for a long, long time in Chinese prisons.”

He explained that he is seeking for a “Middle Way” rather than independence, so Tibetan people can achieve autonomy within China similar to what Hong Kong and Macau enjoy.

Sikyong is scheduled to stay in New Zealand for four days, meeting with local Tibetans and drumming up support for the Tibetan cause.