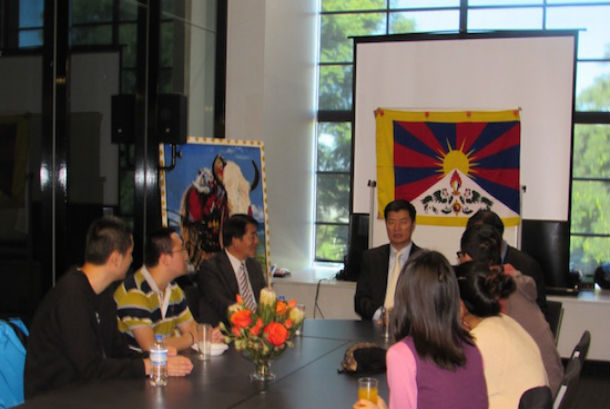 Dharamshala — Tibet was never a part of China but Middle Way Approach remains a mutually acceptable solution of the issue of Tibet, said democratically elected Tibetan political leader, Sikyong Dr Lobsang Sangay who was on a two day tour to Australia from April 28.

With his message of non-violence freedom struggle for Tibet, Dr Lobsang Sangay, spoke about history of Tibet, Middle-way Appoach and other Tibet related issues to a group of Chinese students from China.

Dr Sangay arrived in in Brisbane, capital of Queensland, Australia on April 28 to begin his two-day tour of the country along with Representative Lhakpa Tshoko, according to the office of Tibet in Australia.

It said that Sikyong met students from Mainland China, interacted with them by exchanging views and thoughts about Tibet and China. Sikyong spoke about Tibet China relation, both past and present.

He explained them the reasons why Tibet was never a part of China, current situation in Tibet and gave them information about the Cultural Revolution when Tibet's sacred monasteries were demolished; sacred Buddhist literatures burned, captured monks and nuns and tortured them.

Sikyong also touched on China's policy on population transfer of Han Chinese; how they affected Tibetans to become secondary citizens in their own country.

Dr Sangay also spoke and explained the Middle Way Policy initiated by His Holiness that seeks genuine autonomy for the Tibetan people within the constitutional framework of China through meaningful dialogue.

Speaking to Tibetan community, Sikyong spoke on various issues relating to Tibetan struggle including the importance of unity and preserving the rich Tibetan language and culture as advised by His Holiness the Dalai Lama.