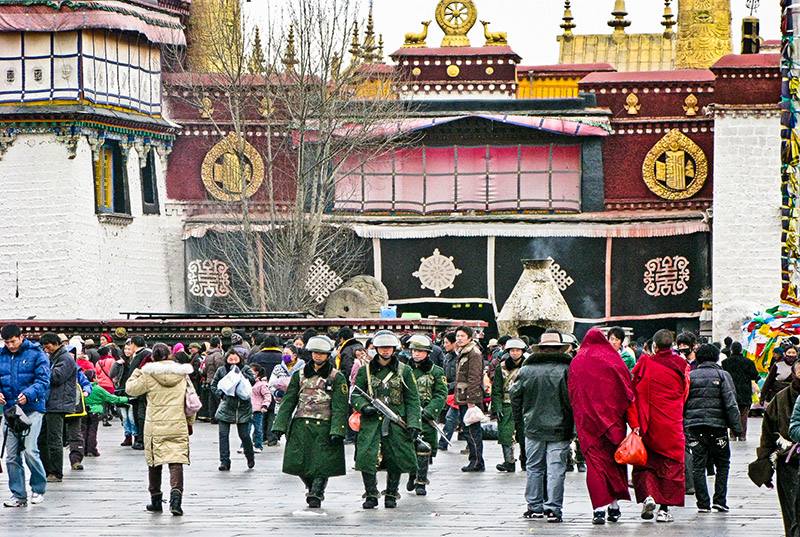 Dharamshala — The U.S. State Department’s International Religious Freedom Report for 2016, released on August 15, 2017, says the Chinese “authorities engaged in widespread interference in religious practices, especially in Tibetan Buddhist monasteries and nunneries," which has led to a continued 'decline' in the traditional monastic system.

The report says, “Across the Tibetan Plateau there were reports of forced disappearance, physical abuse, prolonged detention, and arbitrary arrest of people due to their religious practice, as well as forced expulsions from monasteries, restrictions on religious gatherings, and destruction of monastery related dwellings, according to media reporting and human rights organizations.

"Security forces maintained a permanent presence at some monasteries. In many Tibetan areas police detained monks and lay persons who called for freedom, human rights, and religious liberty, or who expressed support for the Dalai Lama or solidarity with individuals who had self-immolated. Several monks were detained without formal criminal charges. Restrictions on religious activities were particularly severe around politically and religiously sensitive anniversaries and events.

"Tibet scholars stated the Chinese government’s ban on minors entering monasteries and nunneries and restrictions on travel of monks and nuns threatened the traditional transmission and practice of Tibetan Buddhism. According to human rights organizations, authorities scrutinized and sought to control monastic operations and restricted travel for religious purposes, including to neighboring countries such as India and Nepal."

"In the TAR and other Tibetan areas, authorities engaged in widespread interference in religious practices, especially in Tibetan Buddhist monasteries and nunneries. There were reports of forced disappearance, physical abuse, prolonged detention without trial, and arrests of individuals due to their religious practices. Travel restrictions hindered traditional religious practices and pilgrimages. Repression increased around politically sensitive events, religious anniversaries, and the Dalai Lama’s birthday, according to numerous sources. Reportedly, authorities evicted more than 2,000 monks and nuns from Buddhist institutes at Larung Gar and Yachen Gar, destroying the homes where they resided and subjecting many of them to 'patriotic re-education.'"

“The traditional monastic system continued to decline as many top Buddhist teachers remained or died in exile in India or elsewhere, and some of those who returned from India were not allowed to teach or lead their institutions.“

On the issue of reincarnation system, the report said, "The government continued to exercise its authority over the approval of reincarnations of Tibetan Buddhist lamas and the supervision of their religious education. In addition, authorities closely supervised the education of many key young reincarnate lamas. In a deviation from traditional custom, government officials, rather than religious leaders, managed the selection of the reincarnate lamas’ religious and lay tutors in the TAR and some other Tibetan areas. According to state-run media reports, in April it was announced that the database of 1,311 'living buddhas' that it deemed 'authentic' was nearly complete. The Dalai Lama was not on this list."

"The new TAR Party Secretary Wu Yingjie said in September that countering the Dalai Lama would be the top priority during his term in office and later stated publicly on November 15 that the 'Dalai Clique' was the biggest threat to the region, and that the Party must exert religious, political, and economic control over monasteries. Authorities in the TAR continued to prohibit the registration of children’s names that included parts of the Dalai Lama’s name, or names included on a list blessed by the Dalai Lama."

"There were instances of authorities confiscating and canceling previously issued passports as a way of preventing Tibetans from participating in the 34th Kalachakra Initiation by the Dalai Lama in India. Event organizers in India estimated as many as 7,000 Chinese Tibetans were barred from attending the 34th Kalachakra, some of whom were detained en route to the pilgrimage after they had left China. Authorities warned participants or any who were involved would face jail terms from 10 days to five years."

Regarding the legal framework, the report states, "The constitution of the People’s Republic of China states citizens enjoy 'freedom of religious belief,' but limits protections for religious practice to 'normal religious activities' without defining 'normal.' The constitution bans the state, public organizations, and individuals from compelling citizens to believe in, or not believe in, any religion. It says religion may not be used to disrupt public order, impair the health of citizens or interfere with the educational system.

"Within the TAR, regulations issued assert state control over all aspects of Tibetan Buddhism, including religious venues, groups, and personnel. Through local regulations issued under the framework of the national-level Management Regulation of Tibetan Buddhist Monasteries, governments of the TAR and other Tibetan areas control the registration of monasteries, nunneries, and other Tibetan Buddhist religious centers. The regulations also give the government formal control over the building and management of religious structures and require monasteries to obtain official permission to hold large-scale religious events or gatherings.

"To establish places of worship, religious organizations must receive approval from the religious affairs department of the relevant local government both when the facility is proposed and again before services are held. Religious organizations must submit dozens of documents in order to register during one or both approval processes, including detailed management plans of their religious activities, exhaustive financial records, and personal information on all staff members."

The report also included other ways in which Chinese authorities were attempting to control religious activity, saying, "In many areas, monks and nuns under the age of 18 were forced to leave their monasteries. In March Shiqu (Dzachuka) County in Ganzi (Kardze) Prefecture reported the government had removed 300 minors from local monasteries following a January 2015 provincial mandate to remove all monks and nuns under the age of 18 from monasteries and Buddhist schools to receive 'patriotic education.'

"According to government policy, newly constructed government-subsidized housing units in many Tibetan areas were located near township and county government seats or along major roads, with no nearby monasteries where resettled villagers could worship. Traditionally, Tibetan villages were clustered around monasteries, which provided religious and other services to members of the community. Many Tibetans continued to view such measures as CCP and government efforts to dilute religious belief and weaken the ties between monasteries and communities."

"In one case of self-immolation from the year, the International Campaign for Tibet (ICT) reported that Tashi Rabten self-immolated in Maqu (Machu) County, Gansu Province, in December while calling for the return of the Dalai Lama. According to the Tibetan Center for Human Rights and Democracy, county police detained Rabten’s wife, two children, and other relatives when they requested the return of his body following the incident. According to RFA, police then beat and tortured Rabten’s wife and daughters after they refused to sign a document saying Rabten had self-immolated because of domestic conflicts, rather than as a response to government policies. Rabten’s wife and children subsequently signed the document, and authorities released them."

Highlighting the detainment of religious prisoners, the report detailed that, "Limited access to information about prisoners made it difficult to ascertain the exact number of Tibetan prisoners of religious conscience, determine the charges brought against them, or assess the extent and severity of abuses they suffered. The U.S. Congressional-Executive Commission on China’s Political Prisoner Database included records of 649 Tibetan political prisoners who had been detained by October 11, and who were presumed to remain detained or imprisoned. Of the 649 political prisoners, 640 were detained on or after March 10, 2008, the start of a wave of political protests that spread across the Tibetan areas of China. Tibetan Buddhist monks, nuns, and teachers made up 277 cases, of the 640.

"There were reports of the arbitrary arrest and physical abuse of religious prisoners and prolonged detention of religious figures without criminal charges. In October authorities detained Lobsang Tsultrim, a monk from Kirti Monastery, for shouting slogans supportive of the Dalai Lama in public. It was reported that police severely beat Tsultrim; and at year’s end, he was awaiting trial at Wenchuan County Detention Center in Aba (Ngaba) Prefecture.

"In September family members located Lobsang Kelsang, a Kirti Monastery monk missing since his 2015 detention by police following a solitary protest while carrying an image of the Dalai Lama in Sichuan Province, in Deyang Prison after being sentenced to three years in a secret trial, according to RFA. RFA’s source said another Kirti monk named Adak was also secretly given a three year sentence in August.

"In June Lobsang Tsering, a monk from Kirti Monastery, was reportedly detained in Aba (Ngaba) County following a solo protest against Beijing’s rule in Tibet in which he wore a ceremonial scarf and carried a photo of the Dalai Lama, calling for his long life. He was reportedly beaten in custody.

"In December nine Tibetans were sentenced to prison terms of five to 14 years for their participation in the Dalai Lama’s 80th birthday celebration the previous year. Some of them were monks from Kirti Monastery, and had previously been imprisoned and reportedly tortured."

The State Department also chronicled reports of authorities targeting individuals in religious attire, including reports such as, "Sources continued to report security personnel targeted individuals in religious attire, particularly those from Naqu (Nagchu) and Changdu (Chamdo) Prefectures in the TAR and Tibetan areas outside of the TAR, for arbitrary questioning on the streets of Lhasa and other cities and towns. Many Tibetan monks and nuns reportedly chose to wear nonreligious garb to avoid such harassment when traveling outside of their monasteries and around the country.

"In some cases, authorities enforced special restrictions on Tibetans staying at hotels inside and outside of the TAR. Police regulations forbade some hotels and guesthouses in the TAR from accepting Tibetan guests, particularly monks and nuns, and required other hotels to notify police departments when Tibetan guests checked in, according to an RFA report and confirmed by several hotels.