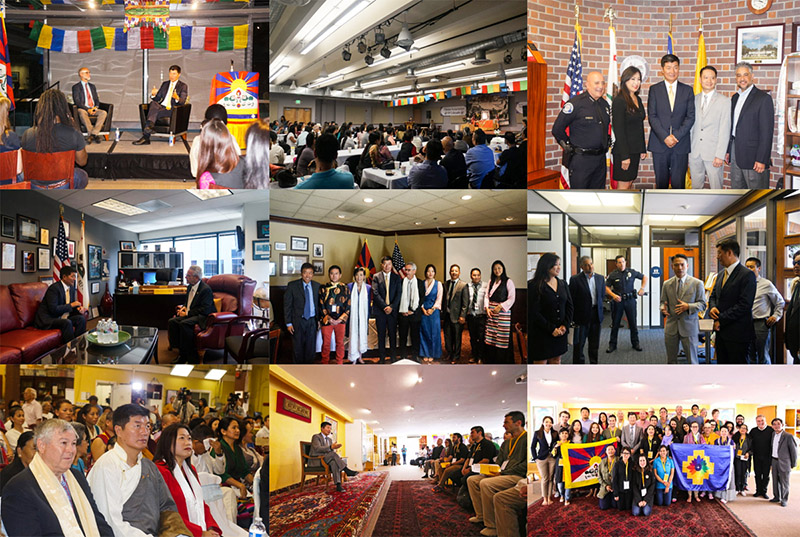 Dharamshala — The President of the Tibetan government in exile, Dr Lobsang Sangay, visited several Tibetan communities and made public speeches during his North America trip, including various cities across the western coast of the US and his first voyage to Mexico.

Arriving in Denver, Colorado on August 29, Dr. Lobsang Sangay met with local Tibetans and Tibetan supporters, and addressed local Tibetans residing in Denver and across Colorado at Naropa University, reminding the audience of the importance of preserving Tibetan language, culture and values.

On August 30, President Sangay arrived in Santa Fe, and met the Tibetan community at the Santa Fe community hall. Particularly targeting the Tibetan youth, the President discussed the great importance of youth in the future of the Tibetan movement.

Speaking at Loyola Marymount University in Los Angeles, California on September 1st, the President addressed over a hundred scholars and students, apprising them on the situation inside Tibet. “China has destructed 98 percent of monasteries and disrobed 99.5 percent of monks and nuns. However, His Holiness and the Tibetan people has worked so hard towards it revival, that today the revival of Tibetan Buddhism and Tibetan culture has become a success story,” he said.

"Tibet has often been called the third pole and the water tower of Asia. It is a lifeline to over 1.4 billion people down the stream, which is endangered now. Tibet’s climate affects weather of North America and other parts of the world. NASA reports that by 2100 its glacier will melt down. This will happen because of urbanization and industrialization of Tibet.

While in LA, the President also took the opportunity to meet with local government members. In a meeting with US Congressman Alan Lowenthal, the Congressman shared that he witnessed active 'Chinafication' in Tibet. He further said improvement of human rights is important and urgent in Tibet, while reiterating US support for the Middle Way Approach.

The Tibetan Association of Southern California hosted a luncheon with the President, attended by US Congressman Alan Lowenthal, Congresswoman Judy Chu, and other honored guest holding local government positions.

Congressman Alan Lowenthal shared his observations on the situation inside Tibet, especially what he witnessed during the US high-level delegation visit to Tibet. Congresswoman Judy Chu shared her experience during her visit to Nepal and Dharamsala with leader Nancy Pelosi, expressing her solidarity with the Tibetan people in Nepal.

Traveling to Mexico for the first time, the Tibetan President attended the Americas Regional Meeting of Tibet Groups which was held in Mexico from September 1-3 in Mexico City organized by International Tibet Network.

Forty-three participants from the US, Canada and Latin America attended the meeting, at which the President delivered the keynote address, lauding the work of the support groups, saying, “it was through hard work of many including the Tibet supporters that the Tibet issue is well recognized around the globe.”

"Beijing does enjoy very good relations around the world at the government to government level. However, the people and media are very skeptic about Beijing’s approach. Keeping this into mind, the Tibetans and Tibet supporters have the responsibility to make the Tibet issue relevant in the global context and make it a referral point."