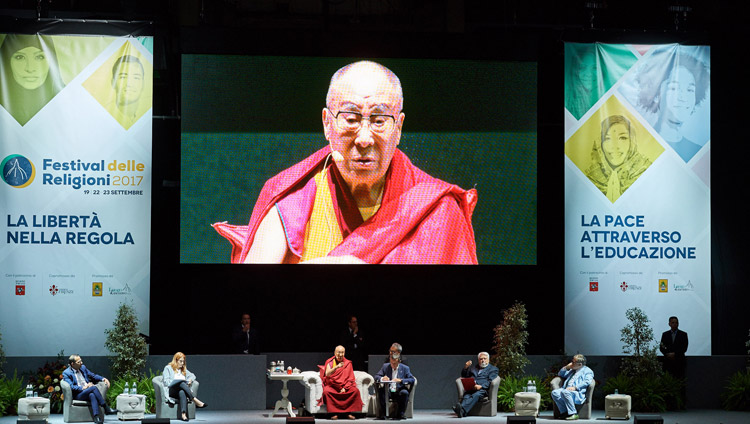 Florence, Italy — His Holiness the Dalai Lama joined an audience of nearly 6000 and a panel of fellow religious leaders while in Tuscany this week, at an inter-religious meeting entitled, Freedom Through Rules.

Director of the Istituto Lama Tzong Khapa, Filippo Scianna, welcomed His Holiness and the other participants. Moderating the meeting, President of Italian national broadcaster Rai, Monica Maggioni, invited His Holiness to open the discussions.

“Good morning brothers and sisters. It is indeed a great honour for me to have this opportunity to share some of my experiences with you. I consider myself to be just one among 7 billion human beings alive today, who all have a right to live a happy life. It’s in the interests of humanity for us to talk about harmony, peace and unity.

“When we are born, we are like this little girl here, with no thought of ‘us’ and ‘them’, just ready to respond to any who smile and show affection, whatever their nationality, family or social background. Creating divisions provokes an unease that can easily spill into violence. And yet deep down we are one. We are the same in being human—no differences between us.

“Right now we are happy here, but elsewhere people are being killed and innocent children are dying of starvation. We need to look into how to put a stop to these man-made sufferings. A fundamental start is to recognise that despite secondary differences between us, at root we are all the same as human beings.

“Since today even religion is giving rise to conflict, this kind of interfaith gathering takes on an additional significance. Can members of different religious traditions live together? The answer is 1000 times—yes. India is a living example. All the world’s major religious have flourished there side by side for centuries.

“These days it’s wrong to refer to Muslim terrorists or Buddhist terrorists because once someone embarks on acts of terrorism their actions are no longer true to their religion. Islamic teaching, for example, says that one who sheds blood is no longer a proper Muslim.”

Other participants included the former president of the European University Institute, Joseph Weiler, who contributed a Jewish point of view; Father Enzo Bianchi who offered a Catholic point of view, and President of the Union of Italian Islamic Communities and Imam of Florence, Izzedin Elzir, who provided a Muslim point of view.

Interacting with Imam Elzir, His Holiness said that friends have told him that ‘jihad’ is about our inner struggle to combat our disturbing emotions, which Elzir agreed to, saying it means to put what you believe into practice.

Elzir agreed that we need to try to change ourselves and that, if we don’t respect ourselves, how can we respect others? He quoted a verse, which is at the root of his faith, that says “God shows his love for all humanity”.

In his summary remarks, His Holiness said:

“If we accept the value of religion, we should be sincere in observing it in practice. All our religious traditions, despite widely varying philosophical points of view, which I appreciate in the way I admire a garden of different coloured flowers, have the potential to create a more compassionate person.”

After a lunch break, His Holiness was scheduled to give a public talk on Peace through Education. Governor of Tuscany Enrico Rossi introduced His Holiness, who began:

“War means organized violence. War only exists among human beings. Other animals may fight, but they don’t go to war. They haven’t developed weapons of mass destruction—these are only found among human beings. One reason for this is that human intelligence misused makes human anger immensely destructive. This is why it’s clear that there will be no peace in the world without peace of mind.

“Human nature is compassionate and combined with warm-heartedness can ensure individuals, families, communities and nations live in peace.”

His Holiness answered questions from the audience touching on education, the potential roles of analytical meditation and memorization.

Concluding the event, His Holiness said, “As far as the future of humanity is concerned, we have to start to work to create a better world now. It may take twenty to thirty years to achieve the changes we seek, but we can’t delay—we have to begin right away.”