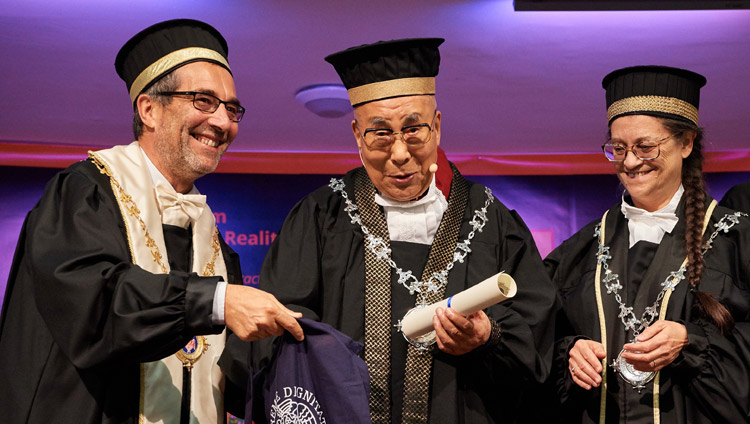 Dharamshala — His Holiness the Dalai Lama wrapped up the Italian portion of his European tour, by being awarded with an honorary degree from the University of Pisa, and addressing students in the square of Pisa.

His Holiness graced the stage of the Piazza dei Cavalieri in the historic city of Pisa, addressing an audience of 1300 students. Joined on stage by the Mayor of Pisa, Marco Filippeschi, His Holiness addressed the audience:

“We are still in the early years of the 21st century. People’s standard of living and the level of technological development have increased, but the question is whether we are happier as a result. The wish of all 7 billion human beings alive today to live a happy life is contradicted by the fact that many of the problems we face are of our own making. When our minds are dominated by destructive emotions like anger and fear we can’t make proper use of our intelligence, tending instead to make trouble for ourselves. We need to examine how this comes about.

“There’s violence in the Middle East and North Africa. Children are starving in Yemen. In Myanmar, a Buddhist country, Muslim brothers and sisters are suffering at the hands of Buddhists—it’s all very sad.

“Because our existing education system is oriented towards material goals, people neglect their inner world. They don’t know how to bring about peace of mind. You can’t buy it in the supermarket and you can’t find it by taking drugs or undergoing a surgical operation.

“On the one hand we enjoy sensory pleasures like watching sport and listening to music. But anger and fear are mental experiences; they don’t belong to the sensory realm. So the real trouble is in the field of emotions. I tell people that if they really want to find happiness and joy, they need to address the mental as well as the physical level.

“Just as we take care of our physical health by observing physical hygiene, we need to cultivate emotional hygiene if we’re to secure peace of mind. Since many of the problems we face are related to our minds, it’s in our minds that we must find a remedy. This is simply a matter of physical and mental well-being.

“Fear and anxiety easily give way to anger and violence. The opposite of fear is trust, which, related to warm-heartedness, boosts our self-confidence. Compassion also reduces fear, reflecting as it does a concern for others’ well-being. This, not money and power, is what really attracts friends. When the mind is compassionate, it’s calm and we’re able to use our sense of reason intelligently. When we’re under the sway of anger or attachment, we’re limited in our ability to take a full and realistic view of the situation.”

Speaking directly to the students His Holiness remarked that he and the older members of the audience belonged to the 20th century, a time that has gone. Belonging to the generation of the 21st century, he told them they were the future of the world.

“Don’t follow the pattern of the 20th century, be more realistic, more holistic—take a broader view. Take into account the inner world of the mind and think about how to ensure both physical and mental well-being. Remind yourselves of the oneness of all 7 billion human beings. Basic human nature is compassionate. If you can cultivate that with intelligence, you’ll be able to create a happier, more peaceful world.”

He observed that since millions have found peace of mind in their religious practice, it’s wrong to refer to Muslim or Buddhist terrorists. When terrorists engage in harmful behaviour, they desert their faith.

After lunch hosted by the University of Pisa at the Pisa Congress Hall, His Holiness attended the opening of the first symposium of ‘The Mind-Science of Reality’.

The moderator of the first session introduced the Nobel Laureate who addressed the symposium, saying: “I view this occasion as having two purposes, the first is to extend our knowledge. In the past, scientists have largely paid attention to external phenomena, particles and so on, but not the mind. Consequently, many of them deny the mind any status other than as a function of the brain. As the 20th century gave way to the 21st, they began to view mind in a different light.

“The second purpose is related to promoting secular ethics, the introduction of universal values into education based on common experience, common sense and scientific findings.”

On the morning of September 21st, before resuming the second day of the symposium, Rector of the university, Professor Paolo Mancarella, addressed the university’s motivations in awarding His Holiness an honorary degree, referring to him as the most eminent guide of Tibetan Buddhism.

In his introduction to the occasion, the Rector mentioned that His Holiness is the 14th Dalai Lama. He noted that the first, Gendun Drup, was born in the 14th century not long after the founding of the University of Pisa. He also remarked that today was the International Day of Peace and that His Holiness was a Nobel Peace Laureate.

The Rector then conferred on His Holiness the Master’s Degree Honoris Causa in Clinical and Health Psychology.

His Holiness then addressed the audience, saying, “Respected scholars, brothers and sisters, I am deeply honored to have been awarded this degree. I appreciate what the speakers have just said, but some of their praise was exaggerated. I consider myself to be one among 7 billion human beings. I believe having a sense of the oneness of all humanity is relevant in today’s world. Too many of the problems we face pivot on a division between ‘us’ and ‘them’.

“Where other major religions talk about the whole of humanity, Buddhism concerns itself with all sentient beings. The Sanskrit tradition, rooted in the Pali tradition, teaches about cultivating infinite love through reason. I’ve been curious since I was a child. I’ve always wanted to know how and why. How does this work? Why did that happen?

“The Buddha advised, ‘As the wise test gold by burning, cutting and rubbing, so, bhikshus, should you accept my words—after testing them, and not merely out of respect for me.’ He was not only a religious teacher, but a great thinker. This approach of investigation and experiment was embraced by the scholars of the Nalanda Tradition such as Nagarjuna, Dignaga and Dharmakirti who were rigorous in their application of reason. Thus, I too have long admired the scientific approach.

“I count myself as half a Buddhist monk and half a scientist. This honorary degree gives me encouragement. I am now 82 years old and I pledge that in my remaining15-20 years I will dedicate myself to further fostering an understanding of the science of mind.”

His Holiness left Italy to travel to Riga, Latvia on September 22nd.