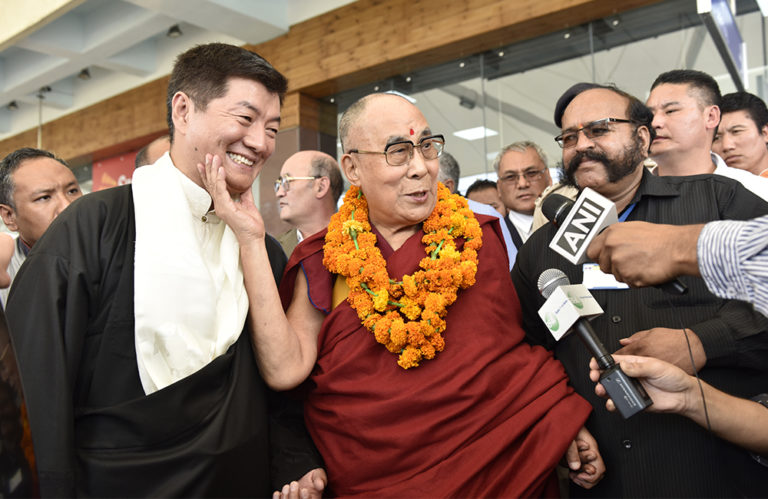 Dharamshala — His Holiness the Dalai Lama concluded his 20-day tour of Europe, giving an interview to Gundars Reders of Latvian Television before returning to Dharamshala.

“All these problems faced by humanity are of our own making”, His Holiness said in the interview.

Asked about the possibility of tackling terrorism with compassion, His Holiness said that using force will only breed more terrorists. “The problem of terrorism can only be solved if we can reach out to them, keeping in mind that they too are human beings”, he said.

He further called for the need for ever-increasing need of integrating secular ethics in modern education. “The problem reflects an education system that only tends to set materialistic goals, but has little time for inner values”, he added.

Acknowledging the relations that exists between Russia and China, His Holiness mentioned that he is unable to visit Russia and its Buddhist republics of Kalmykia, Buryatia and Tuva, taking into account the negative effect it might have on the existing relations between the two countries. The only Buddhist country that he was able to visit at present is Japan.

“That’s ok. My visit is entirely non-political and I am not disappointed. The world belongs to its 7 billion people and each country belongs to its population. I consider the general public to be more important”, His Holiness added.

His Holiness the Dalai Lama’s visit to Europe gained massive media coverage, with more than 100 stories listed on Google news from the Italian media alone.

Both the print and electronic media of Italy including La Sicilia, Repubblica, Viviena, Observeitalia, Tempostretto, covered the visit. The media have lauded His Holiness for his message of peace, non-violence and secular ethics that he brought.

His Holiness the Dalai Lama’s upcoming schedule include a four-day teaching from October 3 – 6 at Dharamshala on Chandrakirti’s Entering the Middle Way (uma jukpa) at the request of devotees from Taiwan.