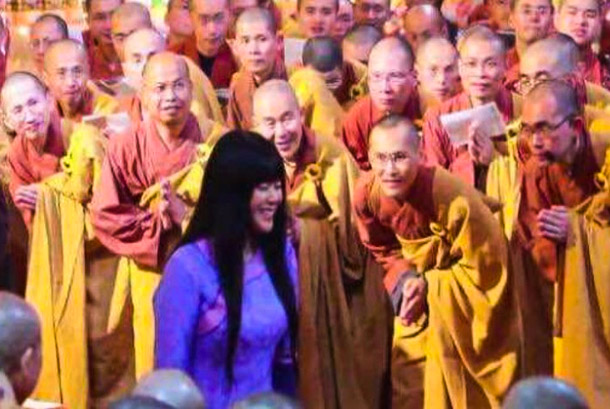 Dharamshala — Bliss and Wisdom, reportedly the largest Tibetan Buddhist organization in Taiwan, founded in 1991 by a devoted disciple of His Holiness the Dalai Lama, Taiwanese monk Master Jih-Chang to promote Tibetan Buddhism in Taiwan and China, is now facing a major crisis. It is also alleged that the Bliss and Wisdom is being secretly manipulated by the Chinese Communist Party.

Ven Fan Yin and a group said that the 102nd Ganden Tripa Rizong Rinpoche also spoke to them in Ladakh on July 15, 2017. Rizong Rinpoche reportedly told them, "That day I spoke to His Holiness the Dalai lama about this matter. His Holiness told me, there are so many problems, especially with the Chinese Communist Party, I don't know if I can help resolve this problem. It's better to use wisdom to judge and solve the problem."

Now the Buddhist organization in Taiwan — where over a thousand monks and nuns, as well as 100,000 followers worldwide live and pray mainly in Taiwan, Mainland China and the overseas Chinese diaspora — is roiled by controversy.

Allegations include a lack of transparency, sexual abuses, misappropriations of funds, and misuse of power at the Buddhist organization. Currently the organisation is led by a northeast China born woman Mary Jin or Jin Mengrong as the spiritual teacher. Jin Mengrong also has been accused of having links with the Chinese Communist Party in order to discredit His Holiness the Dalai Lama.

The Bliss & Wisdom reportedly expelled its first abbot of Fengshan Monastery, Ven Fan Yin. He is claiming legal ownership of the Fengshan Monastery property. The following allegation have been made by the the former abbot and his group.

In their allegations, they have claimed that Chinese government, particularly the CCP are using Bliss & Wisdom to undermine His Holiness the Dalai Lama.

They claimed that the organization has a special relationship to the Chinese government and the CCP, Dorjee Shugden groups, including Harwa Rinpoche and Panchen Lama, recognized by the Chinese communist government. However neither party has presented adequate evidence.

TPI has contacted the Bliss and Wisdom, they have not replied to our request yet.