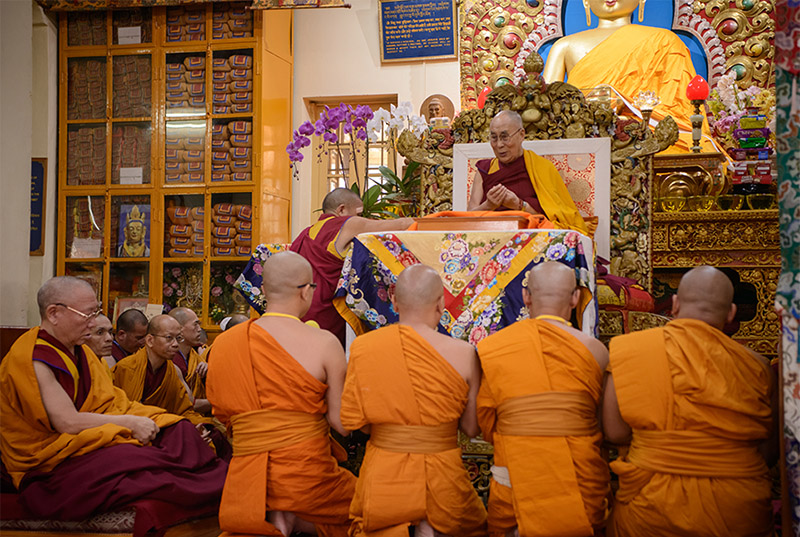 Dharamsala, India — Since the year I was born, 1935, violent conflict has gone on and on. However, towards the end of the 20th century people began to speak out and demonstrate against war. They began to realize that violence brings no benefits, said  Holiness the Dalai Lama during his teaching on Chandrakirti's "Entering the Middle Way" at the request of a group of Taiwanese Buddhists at the Main Tibetan Temple in Dharamsala, India.

Once the customary recitations of the Mangala Sutta, the Heart Sutra and so forth were complete on Thursday, His Holiness the Dalai Lama addressed a crowd of over 10 thousands of people, include over 900 Taiwanese and Chinese devotees, at the second day of a four-day teachings of Chandrakirti's 'Entering into the Middle Way', in Dharamshala. His Holiness the Dalai Lama's four day teaching on Chandrakirti's "Entering the Middle Way" at the Main Tibetan Temple in Dharamshala, India on October 3-6, 2017.

"All sentient beings throughout space want to be happy and among them the human beings on this earth have language and an ability to understand—and yet they engage in all kinds of wrong doing. Even fierce animals only prey on others when they are hungry, but human beings engage in the organized violence that is war and have done for centuries.

"Since the year I was born, 1935, violent conflict has gone on and on. However, towards the end of the 20th century people began to speak out and demonstrate against war. They began to realize that violence brings no benefits. That, and the lack of rancour in Japan and Germany, countries defeated and destroyed at the end of the Second World War, is a sign of progress.

"In the 1960s, I visited Singapore and listened to Chinese monks reciting the 'Heart Sutra'. I remember feeling sad thinking of how Buddhism was being destroyed in China. Today, things have changed and there are said to be 400 million Buddhists in China eager to learn more about it. In other parts of the world too, many people, scientists among them, are developing an interest in what Buddhism has to say.

"Although we've made significant progress in terms of material development, inner peace is related to the mind. I feel fortunate to be able to teach you Chinese today and hope that by bringing about inner transformation we may all contribute to peace in the world. Since the people of Taiwan are free, you can really contribute to the revival of Chinese Buddhist traditions."

His Holiness announced that before continuing with Chandrakirti's text, he would give an explanatory transmission of Je Tsongkhapa's 'In Praise of Dependent Arising'. He observed that the view Tsongkhapa expressed in the early part of his life, which accorded with a Middle Way view, later evolved to accord with the view of the Middle Way Consequentialists. In the 'Golden Rosary' he said that although things have not even a speck of intrinsic existence, they do exist conventionally.

His Holiness mentioned that after depending on Lama Umapa's intercession, Tsongkhapa himself had a vision of Manjushri at Gadong. He saw him within a sphere of blue light and put questions to him about the Middle Way View. When he found himself unable to understand the answer, he was advised to broaden his experience by reading and analysis.

His Holiness declared that dependent arising is important because ignorance is the root of degeneration. While we want to be happy, our unruly minds are a source of suffering. Disturbing emotions arise from our not understanding how things really are. Love and compassion may mollify some of our negative emotions, but the misconception that is a grasping at intrinsic existence is what we need to address—the concept of dependent arising does that.

Finally he remarked that dependent arising accords with a scientific point of view which can be corroborated in our own experience.

His Holiness resumed his reading of 'Entering into the Middle Way'. Chapter two relates to the second bodhisattva ground and focuses on the perfection of ethics. The focus of chapter three is the perfection of patience and during his reading of it His Holiness pointed out that the one thing we can reasonably be angry with is anger. He completed chapters four and five, which are only a few verses long, and made a start on reading chapter six. He remarked that he had agreed to a request that should he be unable to complete the text this time, he would conclude it on another occasion.

The day's session ended with an announcement that Friday His Holiness will give the layperson's vows, lead a ceremony for generating the awakening mind of bodhichitta and grant a Tara permission.