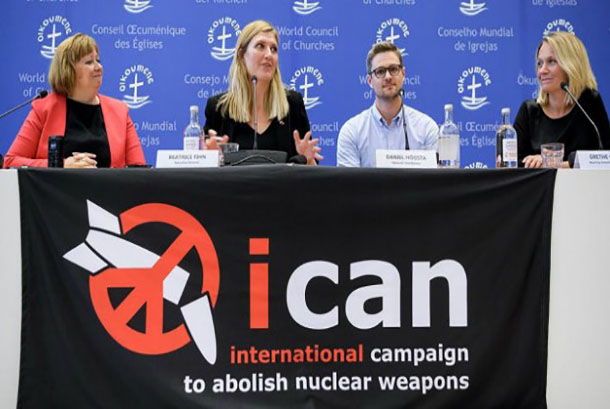 Dharamshala — The spiritual leader of Tibet, His Holiness the Dalai Lama offered his congratulations to the Geneva-based International Campaign to Abolish Nuclear Weapons for winning the Nobel Peace Prize on Friday, praising its sustained efforts to eliminate nuclear weapons throughout the world.

International Campaign to Abolish Nuclear Weapons (ICAN), a nuclear disarmament group has won the Nobel Peace Prize for its decade-long campaign to rid the world of the atomic bomb.

More than 70 years since atomic bombs were used on the Japanese cities of Hiroshima and Nagasaki, the Nobel committee sought to highlight ICAN's tireless non-proliferation efforts.

"In these times of great uncertainty and upheaval in many corners of the world, the work of ICAN is of the utmost urgency. It is therefore most fitting that the Nobel Peace Committee has recognized the endeavors of ICAN." His Holiness said, according to the official website of His Holiness the Dalai Lama. The 1989 Nobel Peace Prize laureate added, "I pray that there will be concerted and vigorous efforts to achieve a world without nuclear weapons."

In an announcement in Oslo, Norway on Friday, the Nobel committee cited ICAN's role in pushing for a global prohibition on the use of nuclear weapons, through the Treaty on the Prohibition of Nuclear Weapons, which was adopted at the United Nations in July 2017 by a vote of 122-1 with one country abstaining.

ICAN Executive Director Beatrice Fihn told reporters that given the current political atmosphere around the world, the call to ban nuclear weapons is more imperative. "The treaty is meant to make it harder to justify nuclear weapons, to make it uncomfortable for states to continue the status quo, to put more pressure on them," she said.

Here are some things to know about the winner of this year's Nobel Peace Prize: In a landmark resolution, 123 countries voted to start talks on a "legally binding instrument to prohibit nuclear weapons" in the First Committee of the UN General Assembly in October 2016.

In July, a UN conference adopted the Treaty on the Prohibition of Nuclear Weapons. It is the "first multilateral legally-binding instrument for nuclear disarmament to have been negotiated in 20 years", the UN said in a statement.

The treaty opened for signature during the annual UN General Assembly last month. As of September 20, 50 states had signed the treaty, which bans the use, development, testing or storing of nuclear weapons under any circumstances.

However, some of the top nuclear powers have yet to sign on to the pact, including the United States, Russia and China. Significantly, Iran, which has been accused by the US government of pursuing a nuclear programme, has signed the treaty.

CAN argues that any use of nuclear weapons would lead to catastrophic consequences for which there could be no effective humanitarian response, and so eliminating them is the only way to prevent their use.

The organisation points out that, given the power that has been added to these weapons, "a single nuclear warhead, if detonated on a large city, could kill millions of people, with the effects persisting for decades."

The organisation today gets by on an annual budget of around US$1m and is funded by private donations as well as the European Union and countries including Norway, Switzerland, Germany and the Vatican.

But while it may not have a lot of resources at its disposal, ICAN does have many of the world's famous and powerful championing its cause. His Holines the Dalai Lama, Yoko Ono and Desmond Tutu are among those voicing support for the organisation's mission on its website. Actor and activist Martin Sheen meanwhile suggests in his quote that "if Gandhi and Martin Luther King Jr were alive today, they would be part of ICAN."