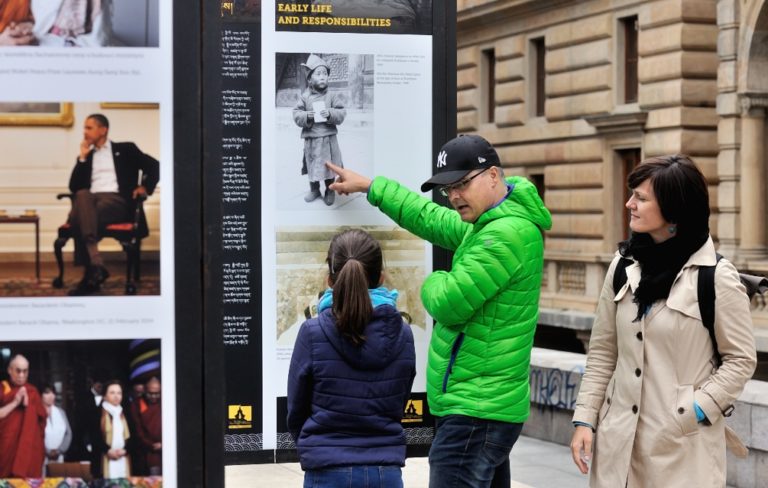 Dharamshala — A photo exhibition detailing the life and legacy of His Holiness the Dalai Lama opened at Vaclav Havel Square in Prague, Czech Republic from October 9 to 12, 2017. Through photographs and textual descriptions, the exhibition chronicled the contributions and achievements of His Holiness the Dalai Lama towards world peace, inter-religious harmony and the Tibetan cause.

The exhibition showcased at the Festival of Democracy was organised by the Tibet Museum of the Department of Information and International Relations, Central Tibetan Administration in collaboration with Forum 2000, Linhart Foundation, Tibet Open House, National Gallery and Vaclav Havel Library. The Festival of Democracy is the associated program of the Forum 2000 Conference.

In his speech at the opening of the exhibition, Mr Tashi Phuntsok, the director of the Tibet Museum said, “We Tibetan people have special relations with the people of Czech Republic. Your country has suffered under the totalitarian communist regime for 40 years and we Tibetans are still suffering under the repressive and totalitarian regime of the People’s Republic of China since 1959.”

Mr. Phuntsok also spoke about the special bond that His Holiness the Dalai Lama and Vaclav Havel, the late president of Czech Republic shared.

He added that, “We Tibetans shall always be grateful to former President Vaclav Havel and people of Czech for inviting His Holiness the Dalai Lama to their country in 1990, the first public figure to be invited to visit the country after independence. And since then, His Holiness has made around 11 visits to the Czech Republic including numerous presences at Forum 2000. With the passing of former President in 2011, we Tibetans have lost a true friend and an all-weather supporter.”

He also informed the gathering about the contributions and achievements of His Holiness the Dalai Lama in the democratization of exile Tibetan polity, which unlike many of the democracies of the 20th Century, was not imposed by a foreign power or gained through a popular uprising rather it was strongly promoted by His Holiness the Dalai Lama and voluntarily established by the Tibetan people at his insistence.